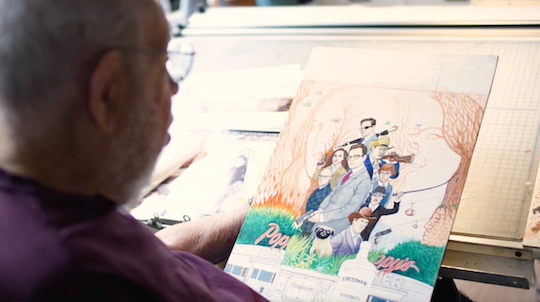 At 96 years of age, Al Jaffee remains as vital and creative as he was when he first created fold-in back covers for MAD Magazine. 20th Century Fox clearly agrees, and proved it by having Jaffee create a “Golden Foldin” (by changing the punctuation, it’s not a trademark violation of himself).

First, I’m more interested in Kingsman: The Golden Circle than I thought I would be. Everything about it looks like the James Bond film I wish Eon Productions would make and I know they won’t. But second — they got Al Jaffee to do something this cool? That’s amazing. The final artwork will be in the September 18th print edition of The New Yorker, but you can play with a virtual version here. Watch Jaffee’s process below, and just hope you’re still this good in your 90s.

Catch up on the original graphic novel by Mark Millar and Dave Gibbons.