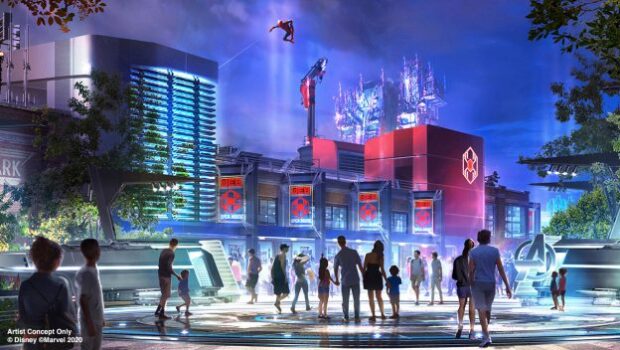 Get ready to swing with Spidey!

Disney Parks Blog announced that Avengers Campus – the (almost) entirely new land dedicated to discovering, recruiting, and training the next generation of heroes – will open on July 18, 2020 at Disney California Adventure.

As previously announced at last summer’s D23, the land will open with the main attraction “WEB SLINGERS: A Spider-Man Adventure”. The attraction will invite guests to put their web-slinging skills to the test. The innovative technology adapted specifically for this attraction includes a seamless blend of 3D and a new virtual interface, which allows guests to go on a mission and experience what its like to have the powers of Spider-Man and you sling webs alongside Peter Parker, played by Tom Holland.

The land’s signature attraction be a team-up type of interactive attraction in which guests will join the Avengers in a fight against alien invaders in Wakanda. The ride will open at a later date, dubbed Phase 2, similar to “Rise of the Resistance” at Galaxy’s Edge. “Guardians of the Galaxy: Mission Breakout” will continue to be an E-ticket attraction, and be more clearly shifted out of the Hollywood Backlot and into Avengers Campus — without moving. That’s power.

On the food front the only new addition announced the Avengers favorite “shawarma joint” in Shawarma Palace, which will open a second location opposite its New York location. MCU fans will remember in the first Avengers after the battle of New York, the heroes visited Shawarma Palace after defeating Loki. The main food attraction appears to be the previously announced Pym Test Kitchen.

At a nearby ancient sanctum, Doctor Strange will train recruits in the mystic arts by bringing this ancient sanctum to life with powerful spells. At night, the area glows even more vividly with majestic colors and lights, pulsating with mystic energy.

Finally, every hero needs a formidable villain to fight… the villainous Taskmaster, who will have a role in the upcoming film Black Widow, will be seen for the first time at a Disney park at Avengers Campus. Taskmaster’s abilities include photographic reflexes. Taskmaster can replicate Super Hero moves, making this new villain a balanced foe for the Campus heroes.