Three years ago, Disney’s California Adventure held the “Summer of Heroes,” with a tag line telling everyone to “Hero up!” It was a bit of a party — including a Guardians of the Galaxy dance party that’s still going on. But a lot has happened since then. Hydra infiltrated the Stark Expo in Hong Kong. Thanos terrorized the Earth. Now the Avengers realize that they need to train a new generation of heroes, and that generation is only going to come (conveniently) from guests at California Adventure and Disneyland Paris, with Disney’s new immersive land, Avengers Campus.

At the Disney Parks, Experiences, and Products panel Sunday, DPEP Chairman Bob Chapek officially announced the land, though models and concept art had been on display at the Parks Pavilion on the exhibit floor all weekend. Still, getting confirmation was pretty cool, and now we have a better sense of the story. 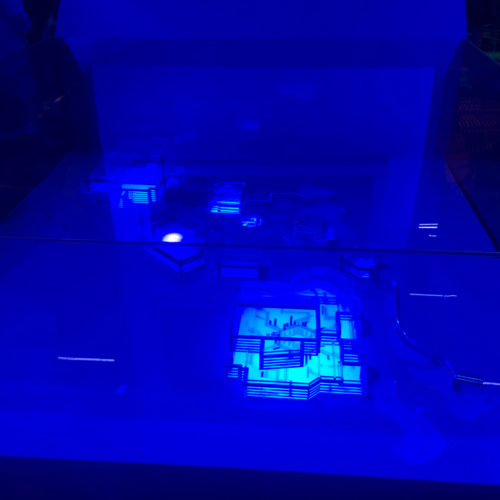 California Adventure’s Hollywood Land loses Guardians of the Galaxy Mission: Breakout (call it a redistricting). Now the Hyperion Theater marks the edge, and the former Tower of Terror becomes the East side of Avengers Campus. But most people will enter through the front off of Buena Vista Street, and that’s where the urgency of the story really begins.

Guests will first encounter WEB, the Worldwide Engineering Brigade, where a team of scientists works to figure out how to jump start the next generation of heroes. Among those young scientists works one Peter Parker, who has built friendly neighborhood Spider-bots to help his friend Spider-Man. Except they go out of control.

The first Disney ride-through attraction to feature Spider-Man (as opposed to Universal’s ride in Orlando), this for now unnamed attraction (maybe it will be just WEB?) will interactive, putting guests into cars with “webshooters” to help gather up and collect Spider-bots. Since interactivity is key in Galaxy’s Edge as well (though you opt in there), it’s quite possible that you’ll start racking up a score here that will help evaluate your readiness to be an Avenger. Both California Adventure and Disneyland Paris will have this attraction, though DCA gets it first in 2020.

After WEB, guests can eat at the Pym Test Kitchen, where Hope Van Dyne has been spearheading the latest innovations to grow and shrink food. Ant-Man and the Wasp will be a presence at Avengers Campus, but the real feature here may be the giant pretzels. Rumor has had it that this would feature a microbrewery as well.

The Parks Pavilion had a small display of Pym Technologies’ experiments in food shipping, so I’d put money on something like a collectible container to go with your lunch. 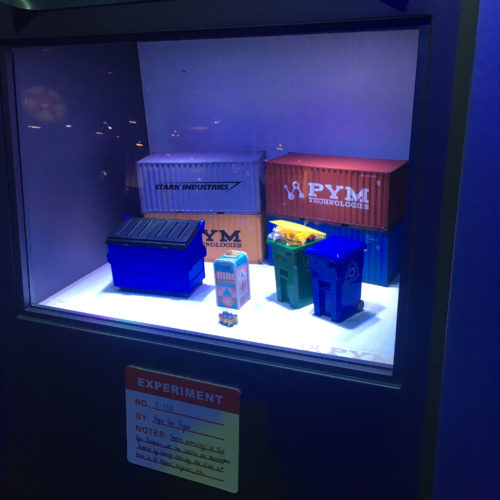 Though Disney didn’t release the concept art for it, you can see in the photo of the model above Dr. Strange’s Sanctorum (name to be released). It sounds like this will be more of an exploratory attraction — great for kids to climb around, as guests walk with Dr. Strange through a ruined California Sanctum. (Perhaps one in Paris as well, but it sounds like this is DCA specific.)

In California, Avengers Campus will feature a classic Avengers Headquarters, with (for now) a model of a quinjet. That’s for now, because in 2020, it will be a place for meet and greets with Ant-Man and the Wasp, Thor, Iron Man, Captain America, and of course Black Panther and the Dora Milaje.

That “of course” comes with the revelation that there’s a Phase 2 coming for Avengers Campus, in which this HQ and Quinjet become the foundation of a brand-new E-Ticket attraction in which guests will climb aboard a quinjet and join the Avengers on an adventure to Wakanda. The tagline says we’ll face off against one of the world’s most powerful villains, and if you look at the concept art, things look pretty insectoid… are we going to get Annihilus in the parks? And does that mean (as we enjoy speculating) that he could be the big bad of Phase 5?

Don’t cry for Paris, however, even if they’re not specifically called out with this Quinjet attraction, because they get something else that Marvel fans want.

At Disneyland Paris, guests can extend their adventures at Disney’s Hotel New York – The Art of Marvel, opening next summer. The hotel will celebrate 80 years of Marvel art and artists, with more than 300 stunning pieces on display. Rooms will include one-of-a-kind themed suites featuring favorite Super Heroes like Spider-Man, and guests can even meet these legends in a dedicated space.

I feel like I could sleep comfortably and safely there. But if I can’t make it to Paris, I’ll definitely Hero Up in Anaheim.