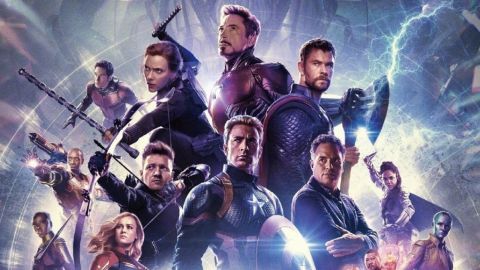 For a loud action movie, Avengers: Endgame spends a decent amount of time facing the ramifications of Thanos’ actions. Directors Anthony Russo and Joe Russo start the focus small — which is hard to do considering that this is the sequel to a film that ended on an existential crisis the size of the universe. It’s a movie about grief and loss, though because it’s got superheroes, it’s also about kicking butt. As the remaining Avengers struggle to find meaning and a plan of action, it’s the little things that draw our attention. If you’re a comics fan, that’s a special draw, because what made Marvel great in the first place was character — though action doesn’t hurt.

Luckily, Endgame has a cast adept at the little things. As Thor, Chris Hemsworth explores a wider range of character than he got to in at least the first two Thor movies. Scarlett Johansson shows the vulnerability within her deadly Black Widow assassin. And finally, Jeremy Renner’s Clint Barton gets a really strong arc. In bringing it all home, screenwriters Christopher Markus and Stephen McFeely tap into years of experience, and show how these characters have grown to become more than two dimensional. 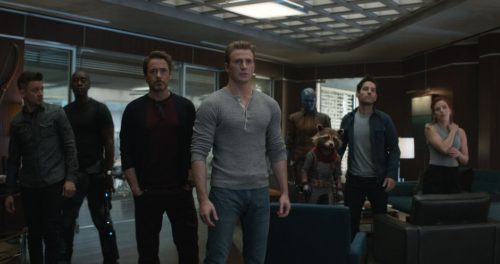 They cut their Marvel teeth on two Captain America films, and it’s Chris Evans as that most steadfast of characters who gets the most attention, though Robert Downey, Jr.’s Tony Stark wants to pull at it. Endgame is as much about the beginning as the end, and that’s both its strength and its weakness.

If you’ve been following along for ten years, of course it’s immensely satisfying. Everybody gets a moment to shine, though with a roster this big, some get only that moment. While Rocket (Sean Gunn/Bradley Cooper) and Nebula (Karen Gillan) grow, ready for a Guardians of the Galaxy vol. 3 that can’t come soon enough, Marvel Studios wants you to remember who this all started with, and so the original Avengers (plus Paul Rudd’s Ant-Man) dominate the time. The only original who gets the shortest shrift, and for weird rights issues always did, is Mark Ruffalo’s Hulk. All his most interesting character development seems to happen between scenes or even movies; audiences only see the result.* 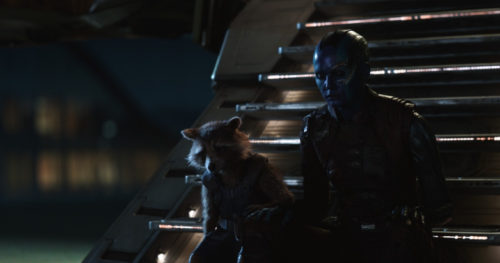 And that’s part of the weakness — for all its giddy satisfaction with plenty of moments that resonate with long-time fans, it’s just not a jumping on point. Though it’s hard to avoid spoilers, I’ll try. Just know that Endgame gives as much love to those ten years of movies as the characters themselves; mostly, it works in terms of character growth and moving the story along, but it could be completely opaque to someone who doesn’t know the movies well.

Occasionally in its fan service (which I completely loved), Endgame tends to go on and on in its fight scenes. Those also tend to be dark and smoky, lit up only by those characters who have a glow about them, so it’s not the easiest to follow. For a brief moment, I dreamed of what a director like George Miller could have done with it. 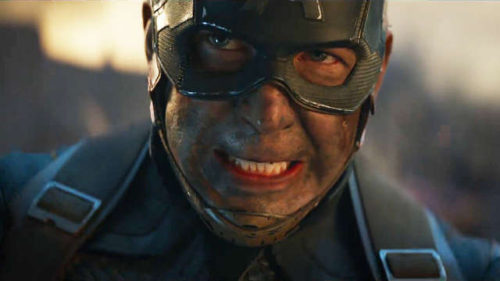 But that’s a bit churlish. The Russos have accomplished something amazing here, supported by Kevin Feige and, of course, decades of comics creators who have created and contributed to a dense mythos that Endgame borrows from as much as it can while being its own thing. When it comes out on home video, freeze frame the list of creators thanked, and seek out their work. It really was visionary, as has been this Marvel Studios experiment.

And though I’ll enjoy this movie again, I’m eager to see the next phase.

*Maybe Disney+ can solve this — though it’s nebulous, Universal holds the rights to the Hulk as a theatrical focus, but it’s unclear if Marvel Studios could do a Hulk streaming series that could dive deeper into Bruce Banner’s evolution.