It was always about fathers and sons.

Actually, that’s what Jack Kirby wrote in his Fourth World saga for DC, but as that was an answer to his work with Marvel in The Mighty Thor, it’s only appropriate that Marvel borrowed it back for Thor, along with a Rainbow Bridge that works suspiciously like a Boom Tube. Because it works, making the latest installment in the cinematic Marvel Universe possibly the strongest, and one that opens up the possibility that this epic really is epic.

Working from a script by a multitude, Director Kenneth Branagh gives this movie the grandly operatic emotions that cosmic characters demand, but keeps the scale small enough that underneath the grandeur, we see humanity. Of course, there’s also the fate of the world resting in a small town in New Mexico.

That’s where Thor starts, out in the desert hinted at in the post-credit scene of Iron Man 2. Jane Foster (Natalie Portman), Erik Selvig (Stellan Skarsgard) and undergrad volunteer Darcy Lewis (Kat Dennings) are investigating strange auroras in the sky when one just opens up and dumps out a man.

From that initial human connection, Branagh leaps backward and begins the process of his modern myth-making. In ancient times, gods walked the earth fighting against the forces of evil. Clear-cut, black and white, and yet canny enough that it doesn’t matter whether these are gods or super-advanced aliens that look suspiciously human. Take the point of view you want – you’ll still get absorbed in the story.

Though it’s writ large, with Anthony Hopkins’ Odin facing down Frost Giants, it’s the small conflict of two brothers vying for his affection and knowing that only one can truly be his heir. Thus the golden child Thor (Chris Hemsworth) grows up arrogant and overconfident, while Loki (Tom Hiddleston) withers in his shadow. 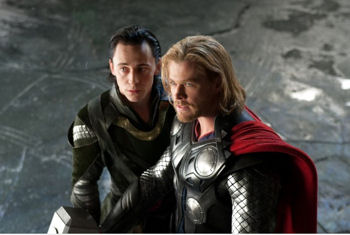 If you’ve read the comics – or the original mythology – you know where scheming comes into play, but Branagh works carefully with his leads, and both their points of view come through as understandable. A lifetime of visible hurt has brought Loki to his deadly mischief, and despite being a bit of an ass at first, it’s also clear that Thor isn’t malicious, just thoughtless.

Not too subtly lurking on the edge of the action is SHIELD, mostly represented by Agent Coulson (Clark Gregg). After spending two Iron Man movies in the background, Coulson finally comes into his own. In fact, he’s far more interesting than his boss, Nick Fury (Samuel L. Jackson), who still seems to be mostly swagger where Coulson is a man forced to do morally grey things in order to accomplish what he believes is right.

Complex, isn’t it? And that’s why Branagh was the right man for this job. These are the same grand themes and labyrinthine psychologies found in Shakespeare’s plays. Unfortunately, Branagh also occasionally gives in to clunky instincts.

He’s a little too Shakespearean in his handling of Volstagg (Ray Stevenson), a character Stan Lee based on Falstaff. Stevenson wears an oddly fit fat suit and red stage beard, while mincing in comedic scenes at odds with the realistic tone set by the main actors.

For that matter, of Thor’s sidekicks only Josh Dallas really fares well as Fandral, a dashing blond Errol Flynn type. Even though he has little more to do than look blandly handsome, he finds a few subtle moments in the background to communicate exactly who his character is. Though Idris Elba brings gravity and absolutely the right voice for Heimdall, he seems a mystery.

The script may be to blame for that, though it may also be that with so much going on, something had to fall by the wayside. For me, it’s the love relationship between Jane Foster and Thor that seems taken for granted because it’s just supposed to happen. Maybe something more exists on the cutting room floor, or maybe we should just buy into it because Portman and Hemsworth are both so charming. 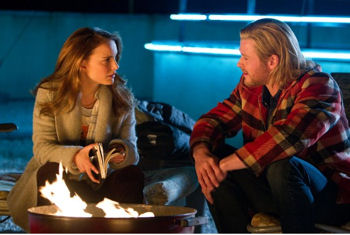 And its strengths absolutely outweigh its weaknesses. This is epic superhero movie making, with a little thought behind it, effortlessly bridging the gap between the Iron Man films and the inevitable Avengers coming next summer.

If anything, Marvel Studios learned from Iron Man 2, and all the references to larger events here feel organic. Occasionally they’re throwaway lines just like the comics did in the sixties, but there’s also a great value in Solveg having heard of SHIELD from long ago. The characters just feel like they existed before the movie began.

Most importantly, Thor works on its own. Despite a PG-13 rating, it’s good for kids, with only one kiss already spoiled by the commercial. As seems to be the usual with movies digitally upscaled to 3D, it’s really not necessary. Because Branagh remembers it’s about simply telling the story, no matter how complex it gets. 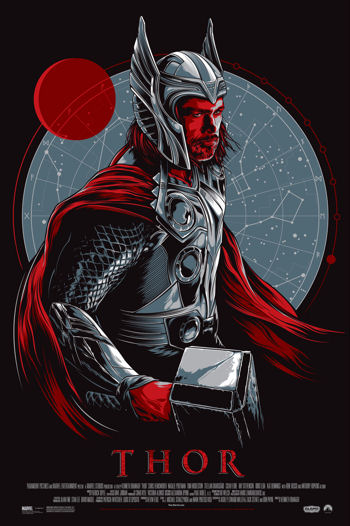