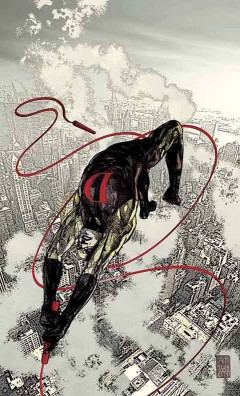 I had a long introduction prepared about how long Brian Michael Bendis and I have been doing e-mail dances, phone tag, and convention appearance promises to get this interview. But now that it’s done? All that really matters is that, yes, Fanboy Planet has finally scored an interview with Bendis. We spoke last week late at night, for the hottest writer in comicdom might just also be a vampire, working best after midnight. Never mind that that’s most likely when his infant daughter is sleeping; our version is better. Because this interview had been several years in the promising, we determined to make it a big blow-out – starting with some talk about a project that hasn’t gotten nearly as much attention in the shadow of The Avengers. 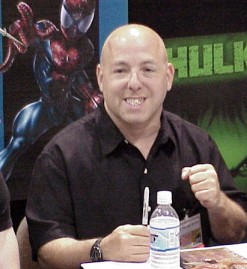 Just to remind you fans, the reason everybody jumped on the Bendis bandwagon in the first place was because of his work on Daredevil, a character celebrating its fortieth anniversary this week with the release of Daredevil #65. So in today’s installment of our interview, we’re talking about The Man Without Fear, as written by The Man Without Sleep…

Fanboy Planet: What inspired you to do “Golden Age

Brian Michael Bendis: I’ve actually been working on this story idea for years, probably as long as I’ve been working on Daredevil. There’s two premises that were separate. One of which was the idea of telling a story that takes place in the Golden Age, the Silver Age and Modern Age of Marvel, all at the same time. It’s very much based on Once Upon a Time in America, if you’ve ever seen that Sergio Leone movie, where you’re pretty much seeing DeNiro’s story from three different generations. It’s a fascinating storytelling device. It’s been done other places, of course, but this is what inspired me.

Or let’s say he birthed himself out of Lucky Luciano or Bugsy Siegel. There would still be people in between those two that would be just as interesting, if not more interesting. And then there’s the Fixer, who was with Daredevil in the origin, and you start putting a tapestry together of organized crime within the Marvel Universe. And in those years you add a chapter.

Fanboy Planet: Are you going to sneak in a nod to the 1940’s Daredevil?

Bendis: He’s actually not a Marvel character. That would have been awesome. There will be golden age heroes that Marvel does own that will be appearing in the story. I don’t want to ruin who, but there’s a couple of guest-stars, one of whom people might have to look up on the internet to see who it actually is. We are going to see a couple of good ones.

Fanboy Planet: You’ve got a lot of guest artists coming in for this one…

Bendis: The guest artists are just coming in only for issue 65, which is a prelude to that story. Issue 65 is about how Daredevil’s outing has affected the rest of the Marvel Universe. It’s a tapestry of short stories illustrated by people like Greg Horn, P. Craig Russell, Michael Golden – people I never thought I’d get to work with. Each of them tell a story from someone’s point of view, all of it having to do with Daredevil and it leads into “who was the kingpin before The Kingpin?”

Bendis: Alex can do a million things. It’s just the language that he’s built for Daredevil has to stay consistent, but this is an opportunity for him to get to try different things.

Fanboy Planet: You used guest artists in Daredevil #50, really utilizing them to make a point…

Bendis: It’s funny. That was one of those things where some people got it, some people didn’t. You know what I mean? Some people complained that it threw them out of the story. Our point there was to illustrate just how long this fight (between Daredevil and Kingpin) had been going on.

Fanboy Planet: So how can you top that?

Bendis: The Daredevil anniversary is different in that in 50 we used artists that were classic Daredevil artists, each and every one. This one is people that have never drawn Daredevil before, both young and classic.

It’s along the lines of the Ultimate Spider-Man super special we did a couple of years back, with each artist telling a chapter and the story kind of flowed together, each artist used very much on purpose. The Avengers finale is like that, too. It’s something I love to do when it’s appropriate. But it’s only appropriate for certain kinds of stories.

They’re very hard to put together. It’s ten times the work for my editor. I’m having a good old time, and she’s doing tons and tons of paperwork. I’m getting all the credit, and I’m not doing anything. 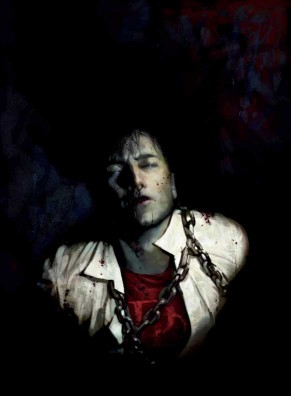 Fanboy Planet: How long is The Golden Age arc lasting?

Bendis: It looks like it’s five or six issues. I keep fiddling with the end. It’s one of those things, since it takes place in so many different time periods, it could end five different ways. I keep picking at it.

Fanboy Planet: It will bring us back to the point where we just left Daredevil, then?

Fanboy Planet: Do you know where you’re going from there?

Bendis: (laughs) After that I’m going to do a thing called Decalogue, which I’ve been promising for a long time. It’s the Ten Commandments; each story is a commandment. They’re little vignettes and short stories that tell a bigger, BIGGER story.  And the bigger story is “what was Daredevil doing for that year when he became the Kingpin?” We skipped over it; all of a sudden he was the Kingpin and it had been a year. This is what happened then and how it really affected Hell’s Kitchen.

Fanboy Planet: This leads into a question that has been in the back of my mind. Frank Miller and Kevin Smith both obviously dealt with Daredevil’s Catholicism, so with this Ten Commandments, is it fair to say that religion is coming back?

Bendis: Religion is coming back. I’m not going to shove it down anyone’s throat. A little goes a long way. The idea behind “The Decalogue” is my love for the Polish filmmaker, Krzysztof Kieslowski. Good luck spelling that.

He’s one of my heroes. I just love him tremendously, and I’d found a book of scripts for his Decalogue (or Dekalog), which he’d done in Poland about twenty years ago. In the introduction, he discusses quite frankly that he wished a bunch of other writers and artists would do the Ten Commandments as a theme. He mentioned how he wasn’t the first person to think of this, and hoped that more people would do it.

I miss him a great deal, and I think it’s my way of A) getting my story across about Hell’s Kitchen, B) getting religion in but also being my valentine to him, doing something that he wanted to have done.

We’ll do two or three stories per issue, but some stories may be one whole issue. I’ve been working on that for a long time; I haven’t rushed it. I announced it a while ago, but that was premature. Now the stories are ready to go.

Look for more conversation with Bendis…