Many is the day we shuffle around, barely aware of our surroundings. Often we run on autopilot, with much of our activity divorced from its meaning, but somehow we keep on going. And at least 90% of those of us stuck in this loop are not flesh-eating zombies.

For Shaun (Simon Pegg), hero of Shaun of the Dead, that ratio shifts a lot faster than he can keep track. In fact, for at least the first twenty minutes, not even the audience can quite tell who’s what. Did that homeless guy eat a pigeon out of desperation, or was it some unfathomable post-mortem reflex? The comparison of daily life with daily unlife has been made before in zombie movies, most effectively by George A. Romero, but never has it been so funny while still being so disturbingly believable.

On some level, it’s also heartening to know that being a slacker is universal. We thought we were just lazy Americans. Pegg has created a character that should have left his college days behind long ago, yet can’t find the ambition to really stand up and be a man. Shaun even still lives with his college roommate, Ed (Nick Frost), a shiftless tubby guy who was probably fun at high school parties. 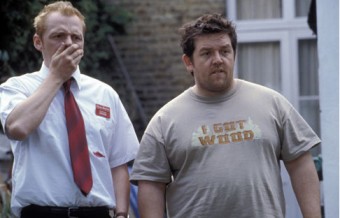 Neither one has noticed (or at least accepted) that they’re nearing thirty – nor do they notice when the streets of their London suburb become strangely empty. As long as they still have their videogames, ice cream and ale, all is well. Never mind that Shaun has to obliviously step through offscreen viscera to get it. Of course, characters in such movies have to change or die, but the new wrinkle that Pegg and his co-writer, director Edgar Wright, have added is that Shaun of the Dead works perfectly well as romantic comedy. This zombie apocalypse happens to fall on Shaun’s anniversary weekend with Liz (Kate Ashfield), so he has to make it up to her that he missed their special dinner without becoming special dinner himself.

The comedy arises naturally out of the characters. Unless you consider the rising of the dead random, everything occurs naturally and in consequence of earlier scenes. Though certain characters’ sense of denial may be funny, it’s also completely understandable. 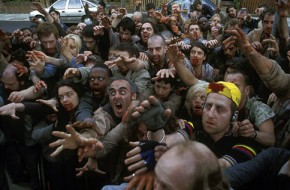 Shaun and his other survivors also try the one thing I’ve always wondered about: acting like zombies themselves in order to get through a crowd. Admit it; if you watch zombie movies at all, you’ve wondered, too. As funny as it is, Shaun of the Dead doesn’t shy away from horrific or even tender moments. People get ripped apart. In one brief scene, zombie children gleefully gnaw away at the innards of a local rummy.

Though recent movies like the Dawn of the Dead remake and Resident Evil have been effectively entertaining, they lacked this underlying sense of creepiness. Nor did they allow us empathy for the zombies. Here, the first one we see, dubbed Mary, has a sense of sorrow to her, confused and hurt about her new state of being before turning on Shaun and Ed to feast on their flesh. 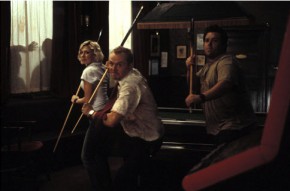 Alive or dead, these characters remain human, and their problems remain so, too. Shaun has a terrible relationship with his stepfather Philip (Bill Nighy) that not even death and undeath can fully resolve. As fun as the title character may be to hang around with, too, you have to admit that his girlfriend has a point about his need to grow up and take responsibility. Pegg and Wright are fresh voices to most of America (they’re popular in England, largely for a series called Spaced), and we should welcome them. Romero liked them so much that he let them wangle themselves cameos in his next zombie movie, Land of the Dead. Hopefully, their future careers here will be full of life. 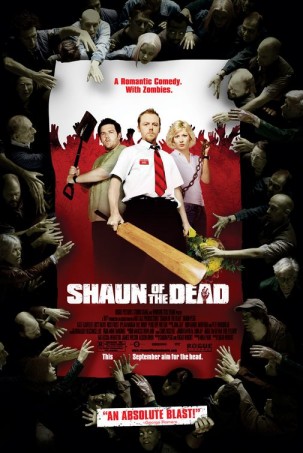