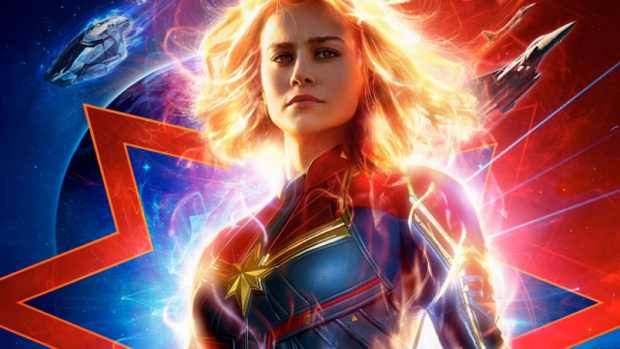 Captain Marvel never gets called Captain Marvel in the film Captain Marvel. But something about that works. Though the Marvel Cinematic Universe has established that Captain America and Ant-Man predated Iron Man, it seems that by 1995, the idea of heroes on Earth had passed into memory. If ambitious Agent of S.H.I.E.L.D. Nicholas Fury knew about Ant-Man, he never mentions it.

But the lack of naming also comes from the film being about “Vers” (Brie Larson) discovering and asserting her own identity. First, we meet her as, as she puts it, a noble hero warrior, fighting for the people she thinks are her people, the Kree. In a not unnoticed script touch from directors Anna Boden and Ryan Fleck with writer Geneva Robertson-Dworet, Vers’ alleged “problem” as a warrior is that she keeps letting her emotions get away from her. Her mentor (Jude Law) counsels her time and again to stay cool and keep in control. But it’s also clear that the Supreme Intelligence (mostly played by Annette Bening) really wants to keep control of Vers.

If you’ve seen the trailer, you know that the action heads back to Earth, where Vers’ origins really lie. Escaping from the evil Skrulls, she crashes on Planet C-53, specifically a Blockbuster Video. Yes, this is definitely 1995, and Marvel learned their lessons from Guardians of the Galaxy; the pop soundtrack puts you right there. Rather than spoil the plot past the trailer, just know there’s war, there’s action, there’s the computer-youthened Jackson, and a cat that clearly wants to steal the show. And appropriately for a plot involving the shape-shifting Skrulls, led by Ben Mendelsohn, nothing about Vers’ origins are what they seem.

Captain Marvel is satisfying, if not quite transcendent. It falls under the category of Marvel movies that have to connect to other Marvel movies, though it does a better job than most of standing on its own. Boden and Fleck have a firm sense of who Carol Danvers is at each point of the movie, and Larson has the tough job of charting different levels of connection. As a character, Carol feels suppressed, with huge blanks in her memory and reprimands to tone it down. If the plotting doesn’t quite earn the easy rapport she builds with Fury, the character does.

Buried under effectively disguising Skrull make-up, Mendelsohn takes what could have been one note and makes his Talos more complex. It’s also nice to see Jackson smile more as young Fury. Really, he should smile more. (Kudos to Boden and Fleck for playing a bit of a game with how Fury lost his eye.)

As for the “noble warrior hero Kree,” it’s nice to see Djimon Hounsou and Lee Pace back in their roles from Guardians of the Galaxy — realizing that Hounsou will now be part of both superhero universes’ Captains Marvel, as he plays Shazam next month. The rest of the Kree are more or less interchangeable, with the exception of Law. Mostly, that’s because he gets screen time. The others just sort of pop up from time to time.

But that leaves more room to focus on Carol, and rebuilding a friendship with her fellow pilot Maria Rambeau (Lashana Lynch) and Maria’s young daughter Monica (sisters Azari and Akira Akbar for ages 5 and 11, respectively). Captain Marvel works best when it’s focusing on Carol’s tenuous emotional connections; the action scenes are strong and effective, but we’ve seen all that before. It’s the why of Carol’s struggles that matter most.

Still, we’re all going to cheer when she comes back to kick Thanos’ butt. Don’t lie. And we already know why. Thanos is bad. Captain Marvel is good. But it’s hard to shake the feeling that Captain Marvel could have been a little bit better.

Nerdy post-script: Yes, this is Marvel Studios’ first official Stan Lee cameo since he passed. It is great. But even better is a cameo from Kelly Sue DeConnick, whose work on Captain Marvel shot the character’s profile high enough to make Marvel seriously consider this film. It’s nice to see that nod to the new storytellers from Marvel; other than allegedly picking the name “Ms. Marvel,” Stan had no involvement in Carol Danvers’ evolution. Roy Thomas and Gene Colan introduced Carol Danvers; Gerry Conway wrote the first issue of Ms. Marvel. DeConnick made her iconic.