Remember being eight years old and the movie you just saw was the best movie you’d ever seen? Guardians of the Galaxy is like that, except it really is that good. It’s as if you took your memories of how good Star Wars, Raiders of the Lost Ark and the first time you watched Star Trek (the Original Series), put them in a blender, and poured them into Marvel’s latest movie.

Unlike all those movies, though, Guardians of the Galaxy isn’t afraid to shy away from sadness and regret. In true Marvel fashion, every member of the Guardians is broken, and the film is as much about beginning to save themselves as it is saving the universe.

Make no mistake, either. By taking us out into space, Marvel Studios have indeed made the stakes as wide as the universe. Though writer/director James Gunn and writer Nicole Perlman have made a few changes from the source material, they have left in wild concepts that are sure to spur imaginations everywhere.

As promised decades ago by Star Wars, we see aliens from a thousand worlds. Many are humanoid with different skin tones, sure, but you also don’t want to distract from how compelling we find Rocket (Bradley Cooper), Groot (Vin Diesel) and Drax (Dave Bautista). Two of them are CG, but easily feel as real as Peter Quill (Chris Pratt). And Michael Rooker might be painted blue as Yondu, but he is still a character hard to dislike. 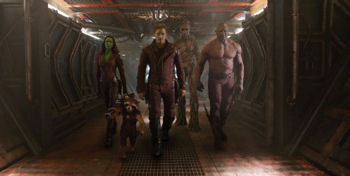 Though the film doesn’t offer much background detail on Ronan (Lee Pace), its main villain, the intensity of his hatred feels all too familiar after reading a few real world headlines. All we need to know is that the empires of Xandar and the Kree have signed a peace treaty, and Ronan refuses to let old wounds heal over.

Of course, for several Marvel movies, we have seen a build-up of the Infinity Gems — the Red Skull sought one in Captain America: The First Avenger, Loki appeared to have another in The Avengers, and Jane Foster ran afoul of one in Thor: The Dark World. Though they have different functions in the comics, so far in the movies they all add up to one thing: ultimate destruction.

Whosoever controls “the orb,” a macguffin given to much fuller demonstrations of power than any old lost ark of the covenant, controls the galaxy. Or destroys it.

Gunn maintains a breakneck pace throughout, shifting tones skillfully. When things threaten to get too serious, the film presents a jawdropping action sequence, and before that gets exhausting, characters flip around into comedy. Yet it all feels organic, not manipulative. It would have the rhythm of real life to it, if it didn’t already have the rhythm of 70s and early 80s pop.

There is one of Gunn’s brilliant touches, at once joyful and melancholy. Star-Lord’s “Awesome Mix Tape, vol. 1” punctuates the action, but also serves to subtly remind the audience of what Peter Quill has lost in his life. But Quill also knows that sometimes it’s okay to just let a favorite pop song wash over you. 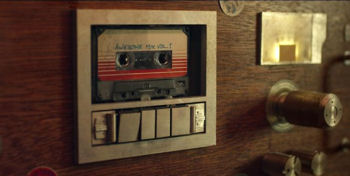 As dark as Guardians of the Galaxy gets, it’s also bright and shiny. To Gunn and Marvel, those other lifeforms out there aren’t living in dystopias. Though the Nova Corps may seem a little harsh and militaristic on the surface, even Rocket has to admit that most of them mean well.

Xandar, at least, is a place you might want to live — clean air, colorful buildings and a lot of open fields — feeling like classic Star Trek. The jury is still out on Hala (the Kree homeworld), as we really only have Ronan’s viewpoint, supported by the savagery of Nebula (Karen Gillan).

And that should lead to the last real point here — while, ahem, certain other companies have claimed that female superheroes cannot carry a movie, Gunn and, one must assume, first screenwriter Perlman proves that it’s simply not true. The real battle promised from the outset will be the one between Nebula and Gamora (Zoe Saldana).

For that matter, Gamora kicks butt right out of the gate. If Gunn’s dream comes true and the Guardians of the Galaxy meet the Avengers some day, Gamora will easily best the Black Widow. And Saldana brings complexity to the role, another character in this film damaged by loss and struggling to make it all right.

In fact, there just doesn’t seem to be a weak link in the acting. The script allows for the occasional limitations in Bautista’s delivery (and in fact, VERY cleverly), and the voice work is stellar. Not once does Cooper sound like himself; he really inhabits Rocket. 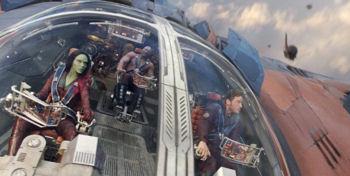 As for Vin Diesel, well, he proved once before in The Iron Giant that he can do a surprising amount of things with a limited vocabulary. Combined with the subtle touches given to the CG character, there’s no doubt that Groot will be beloved for years to come.

As should this film be. For the most part, Marvel keeps raising the game with each movie, and Guardians of the Galaxy is no exception. This is the apex of the Marvel Cinematic Universe, which hopefully means that Gunn and Joss Whedon get to just play a call and response of challenging each other to do better.

But I’ll be honest: nobody is going to top what Gunn put in the post-credits scene.