Last week, I posted a review of a unique improv show — The Resistance, a group of actors who come together on Sunday nights at the ComedySportz Theatre in Los Angeles and create a brand-new action movie live on stage, developed as part of ComedySportz’ “Studio Series.”

They’re not just witty, they’re aggressively physical and playing with stage combat in a way you’re just not going to see at any other improv show.

When I asked ComedySportz artistic director James Thomas Bailey about them, he could only gush. “They’re wonderful improvisers with a great idea…we were thrilled by the physicality and uniqueness of the show. Audiences love it.”

So after laughing myself into a wheeze, I tried to arrange an interview over Facebook. The result there was chaotic, though I learned who considers themselves as the true eye candy of the group. I’ll never tell.

Resistance member Derek Mears took point in the conversation, gathered my questions up, and served as my surrogate at their group meeting. Sure. We’re both Dereks. It works. So here is the official Fanboy Planet interview with The Resistance. You’re going to be hearing a lot more from them as a group and as individuals — and so the answers appear that way.

Derek McCaw: How did you guys come up with the group?

The Resistance: The Resistance started out as a group of friends that wanted to perform together. There was talk of doing a podcast, internet sketches, barber shop quartet (that one is not true) and, although those ideas are still in the works, the risk of live improv was what we loved the most. 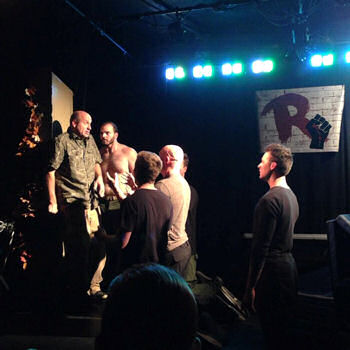 Kurt Scholler against the wall…

The idea of creating a show that had strong storytelling, empathetic characters mixed with high octane action and comedy sounded extremely appealing to us. We decided to add stunt pads to the show to help create interesting building blocks for scenes and add a higher level of safety during our more physical moments.

Since then, the six of us have been performing shows every Sunday at Comedy Sportz LA. We feel very lucky to perform together and we are blown away by the positive responses we’ve been getting from fans.

Derek McCaw: Why call yourselves The Resistance?

The Resistance: We’re “resisting” the 9-5 everyday adult life. We aim to liberate people’s laughter and remind them what it’s like to be a child again. At some point in our lives we are all taught it’s time to grow up and that we’re supposed to stop acting like kids and start acting like adults.

When you come to a Resistance show we ask you to leave your worries at the door and just come play. The show isn’t just our playground, it’s all of OUR playground. We invite the audience to escape everything stressful in their lives, turn off their minds and just have fun. Plus, we thought the name sounded cool. It’s a call to action. Come join The Resistance! 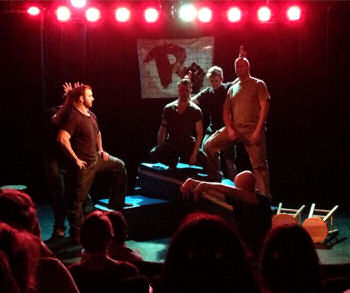 Derek McCaw: What was the moment when you knew the show was working for you?

Kurt Scholler: The very first show. We had never rehearsed before and found out that we were all great storytellers and had a great time playing with each other.

Chris Mathieu: In the first show there was a bar fight and it came together so well that all I could think was “holy shit!”

Ryan Marsico: I felt a spark in the first show.

Justin Michael Terry: When I betrayed my men and dropped them into a waterfall.

Ryan Marsico: (sarcastically) The moment was so movie-like.

Kurt Maloney: When I sang little mermaid in a show and it didn’t feel out of place. I have never been more supported.

Derek McCaw: What is the most dangerous thing you have done to each other?

The Resistance: Chicken fights on stage.

Scholler picked up Maloney over his head and slammed him onto a crash pad.

With our weights ranging from 170 to 235lbs, lifting, throwing, carrying each other is dangerous. We do this every show.

We are each other’s special effects. If someone needs to fly in a scene it is up to the rest of us to pick that person up and fly them around. 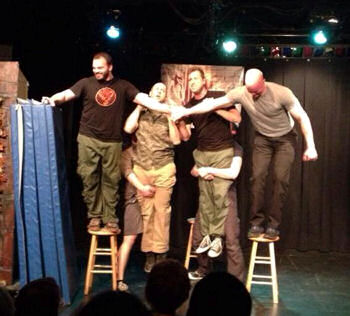 The Resistance’s version of doing pull-ups in prison.

Derek McCaw: For those outside The Resistance, what constitutes the “perfect moment”?

Justin Michael Terry: We are in The Resistance, so we can’t answer that.

The Resistance: The perfect moment onstage is when the show starts to feel like a real movie to us. It’s when you forget you’re improvising and you feel completely connected and emotionally invested in what’s happening on stage.

Derek McCaw: Where do you hope to go with the show?

Derek McCaw: How do you warm up for your show?

The Resistance: We bounce between different mental and physical warm ups. A lot of stretching, push ups, and games to help us focus as a team. We also talk about what sub-action genres we feel like adding to the choice board for the night’s performance.

Kurt Maloney: Oddly enough, Kurt Maloney is always correct. Man he is so smart and so funny. HOW IS HE SINGLE!?!?!?!

Kurt Scholler: Double oddly enough, Kurt Maloney will no longer be answering questions by himself. 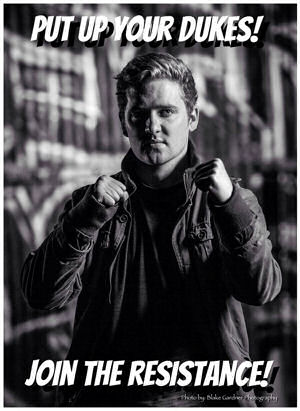