Choking on dust, a small band of political activists — let us not call them rebels — flee from secret police in Tunisia. They have in tow a man who spoke at a political rally, inspiring the people toward freedom, but whose message needs to get even further out.

Of course the government has blocked them on the internet. No tweets, no Facebook, no YouTube, no chance to spread the word. But because one of the activists has received a message from “sve_Urs3lf,” a mysterious online presence, she has hope.

And a wireless signal appears. And a message goes out. And all is not quite what it seems, except that it all feels like somehow, this isn’t a comic, that something like this has happened recently and will happen again.

This book isn’t about tomorrow. It’s about today. And whether or not you agree with its politics, it may be one of the most important books you can read in order to understand just why the cyberworld is so important on a global stage.

The “how” may still be a man behind the curtain affair, but Hacktivist (from Archaia Entertainment) creates a couple of fairly realistic men standing there. Well, they’re still clearly designed by artist Marcus To to be handsome actor bait for the inevitable (if there’s justice) film deal, But Ed Hiccox and Nate Graft are an amalgam of many real world figures.

With their company YourLife, the ultimate social network, they have a bit of Mark Zuckerberg but with a stronger dedication to social justice. Perhaps Julian Assange tints their work, but despite their white-hat activism, so far neither seems as blissfully, cluelessly arrogant as Assange can be. The worst of their sins may be that Graft likes to make a big splash in everything he does — the magnetism of Steve Jobs but with better hair.

And yet as idealized as these characters may be, the story isn’t looking at the world through rose-colored glasses. sve_Urs3lf’s efforts in Tunisia provide a bittersweet victory, as fighting only swells. (Um, say, has anybody paid attention to the Ukraine this week?) 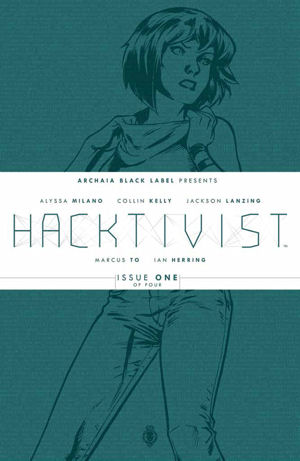 This hacktivism isn’t a panacea; creator Alyssa Milano with writers Jackson Lanzing and Collin Kelly admit there are no easy answers. And they provide a twist at the end of the first issue that makes things only greyer. This might be a world where even the whitest of hats can get dingy — and why not? It’s our world.

So let me step back a second and note that creator: actress Alyssa Milano. I’m going to admit that when this was first announced at Comic-Con, her presence reminded me a lot of the announcements the late Virgin Comics made — fairly popular celebrity “creating” a concept so that a book could be sold on her name, but which probably would turn out to be mediocre at best.

I apologize. That was stupid of me, or at least rude.

In this past year, I have read many books that I have enjoyed, from Archaia’s own The Reason For Dragons to the surprisingly good Afterlife With Archie and of course, the deliciously insane Saga.

Only a couple have made me think I need to re-read this whole thing and ponder the implications. Of course it’s only a story, but it’s a possibility. Those books would be Lazarus and now Hacktivist.

It’s a little slick, but hey, I live in the Silicon Valley, and I know — slick is what the powers are trying for. And if Milano is also carving a little role for herself in the movie adaptation, well, good for her. SHE DESERVES IT.

Because she didn’t create a vanity project; it’s absolutely clear on every page that this book has what it takes to make it great — passion.

So will that passion be rewarded? Let’s hope so. You owe it to yourself, and then you owe it to yourself to start thinking about the issues being raised. Is it simply a matter of good versus evil? It may be. But Hacktivist won’t let it be that simple.