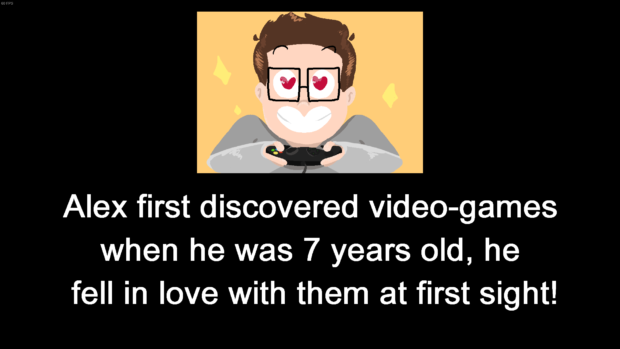 What do we do in between games?

Let’s see. Work? Maybe. Most of us do, probably. If you don’t work, the time you spend in between games is probably spent with your workin’ friends, and you brood about the spectacularly brutal World War I landscape or of fantastical sword and sorcery.

Sleep? Sure. Sometimes more than others, the spectre of sleep looms unashamed over all our lives.
Eat? Hell. I usually eat while playing…which is why tap games are so good. There is a place in the world for games like this, the keen dalliance of the hobbyist. The labor of love. It’s clearly a labor of love, and probably an autobiographical one, evidenced by this: 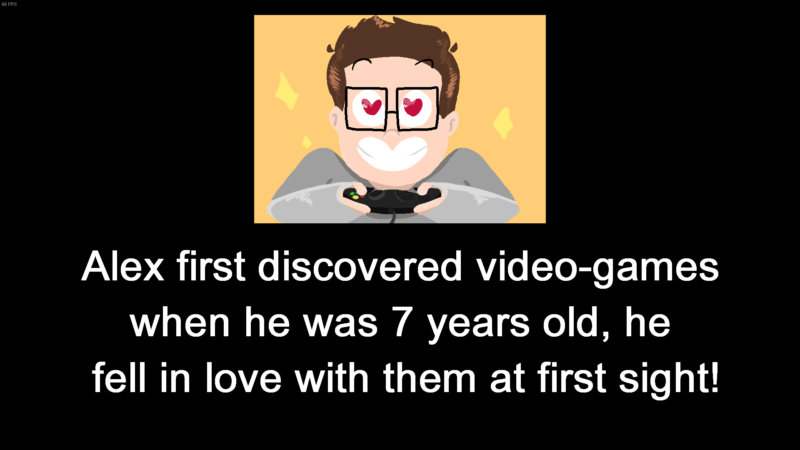 Wow, I really hit the nail on the head! As soon as I saw this premise taking shape, I realized that there was ONLY one way for him to enter the game. 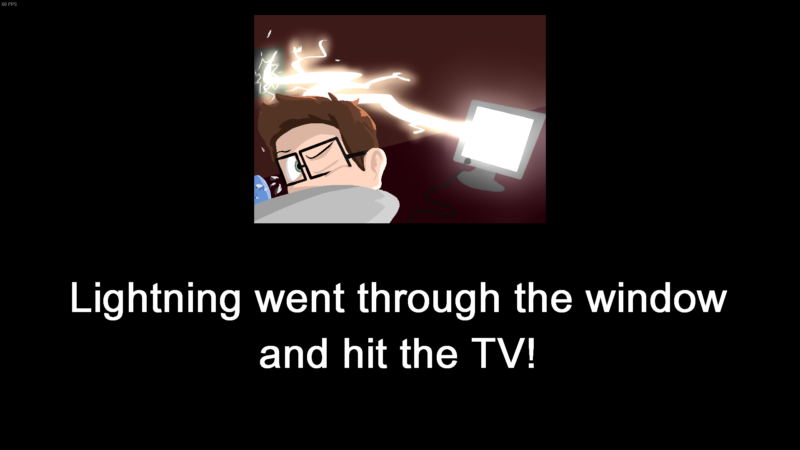 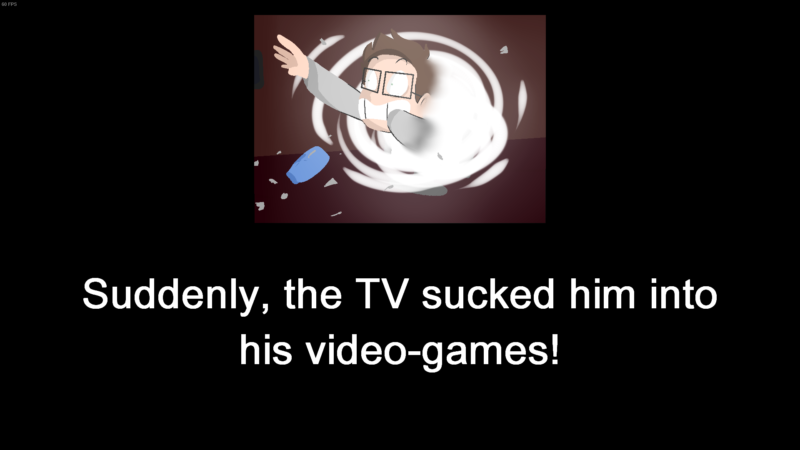 As soon as I saw this intro, I was reminded of something from my childhood. Something I held dead…something campy and familiar but somewhat revolutionary at the time. 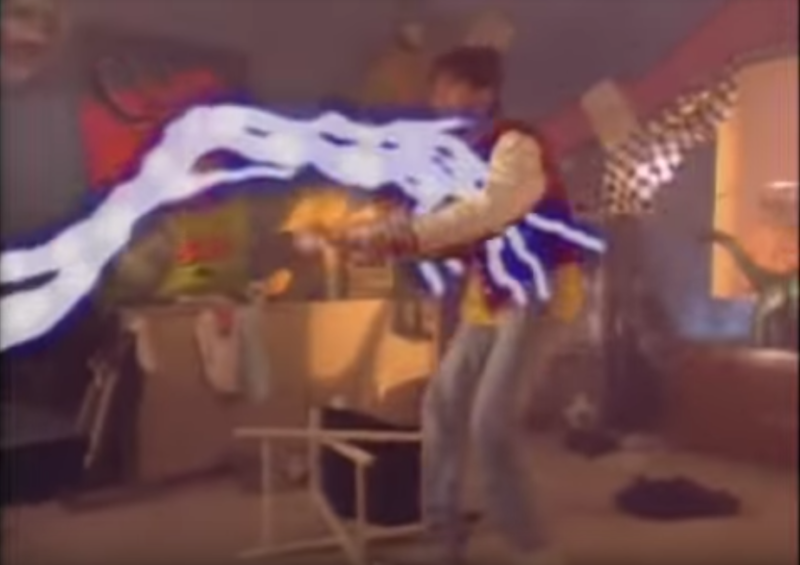 Captain N, the Game Master. Yes, I realize that his video game console wasn’t hit “by lightning,” but if that’s not lightning in that photo, please tell me what it is.

Going back to the beginning, the title In Between Games is actually all too appropriate for this one, because you know what you could also do in between games? You could play, and beat, In Between Games. Probably twice if once you get the hang of it. This is the video game equivalent of an aperitif.

Length aside, In Between Games takes place in what seems to be a vaguely European country that gives a short shrift to punctuation and prose. How do I know?

Diction aside, In Between Games really has a lot going for it. The play begins in a loving pastiche of the Super Mario Bros. world, with a 1-1 level that is rather faithful to the original. You jump, hit blocks, and collect what appear to be dollar bills instead of coins. 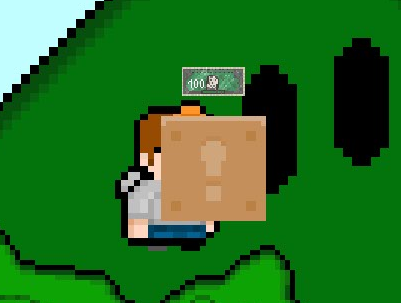 Why do you collect money? It would be too easy to make fun of the ersatz currency…that is, until you think about how Mario collected coins and never purchased a single thing with them. And why, at first glance, do they appear to have the protagonist on them?

And why, about 30% of the time, do you get stuck inside the box and float there until you pop out the top? All excellent questions, if I must say so myself.

And why why would Sonic the Hedgehog collect rings? Was he hoarding them for his betrothed? Not this Alex guy. He doesn’t need to roll into a ball to do a loop, he just tightens his dark gray Toms (probably) and takes it on foot. 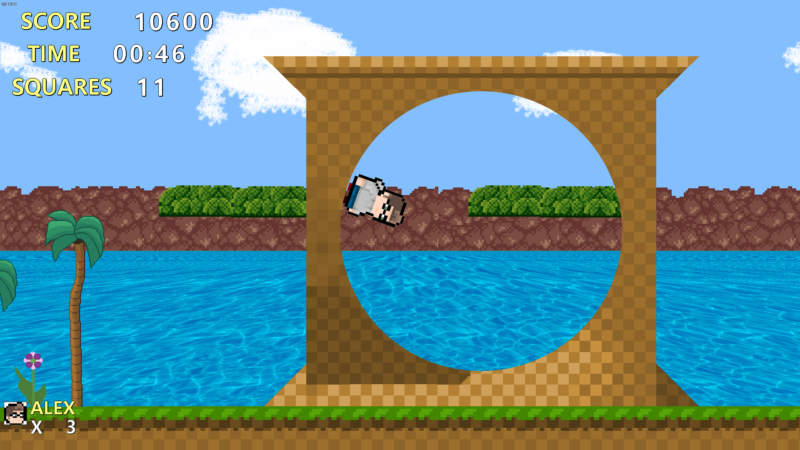 The gameplay is linear to the point of tedium. The action is slow and has a distinct subaquatic feeling.
And the graphics are properly pixelated until you find yourself coming face to face with one of the many bewilderingly placed enemies. 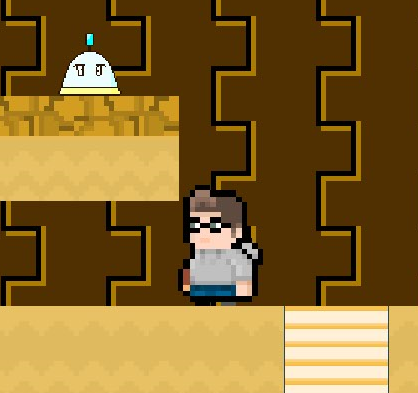 And this…what the hell is THIS thing? 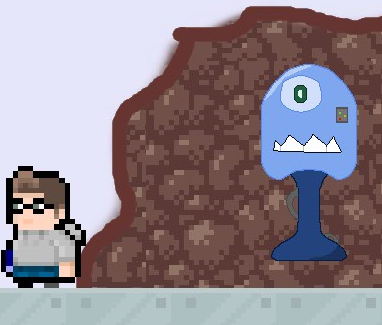 It is only slightly distracting that the enemies have a completely different art style and level of fidelity than most of the landscape, and the main character. If pulled into a video game, wouldn’t the whole place be generally drawn the same way?

I don’t know. What gets me about In Between Games is twofold: how slow the action moves and how short it is.

Oh, also how easy it is.

Oh, and how slow everything moves.

Oh, and how nothing seems to make sense.

The Megaman sendup, for instance. You progress through the levels, based loosely on Megaman villains.

Megaman…my absolute favorite franchise as a kid, and this is what he does to him!

Look at the difference between those two characters. Look at the utter incongruence. Is it nitpicky to complain about such a thing? Why go to the trouble of incorporating two completely different art styles into your game? Especially since you are supposed to have traveled into an 8-bit world where you are the only thing that is actually 8-bit?

Perhaps he has a different memory of these games than I do. I can’t be the only one who fired up the NES to play a round of Ghosts and Goblins just to find that throwing raspberries at an unending supply of implacable demons is NOT what I remembered.

So perhaps they are seeing things through a different lens. The tyranny of memory distorts and washes clean the glaring flaws of reality. So his vision of classic games is just…different.

But it’s all just sort of…uh…bad.

The graphics don’t match up. Though I may suspend disbelief temporarily to accept that this kid is now fighting for his life inside of a video game world, it is strangely difficult for me to accept that the graphics in said world would be so inconsistent.

The sound is muddy, with few things even making noise for some reason. Even Super Mario Bros had a crisp, lively soundscape in comparison.

This may be my shortest review, but it all adds up to an evaluation that I simply cannot escape. If I must be brutally honest (and I must be), it took me three times as long to write this review than it did for me to complete this game. All in all, from start to finish, I finished the game in about 30 minutes or so. That’s it. And I’m not averse to short games. I’ve said here before that I am on a perpetual hunt for the ultimate tight 60-minute game. A full plotline that plays out in a short span of time IS possible, and it is even desirable. Perhaps you could be the one to deliver that tight 60-minute game with a great plotline; with services like Construct 3 game making software, it’s easier than ever for game-makers to create.

Don’t think it’s possible? What do you think movies are? Full stories told in 90 minutes. Sometimes they are three hours if Martin Scorsese is involved. But you get my drift.

Sorry, In Between Games. You are… 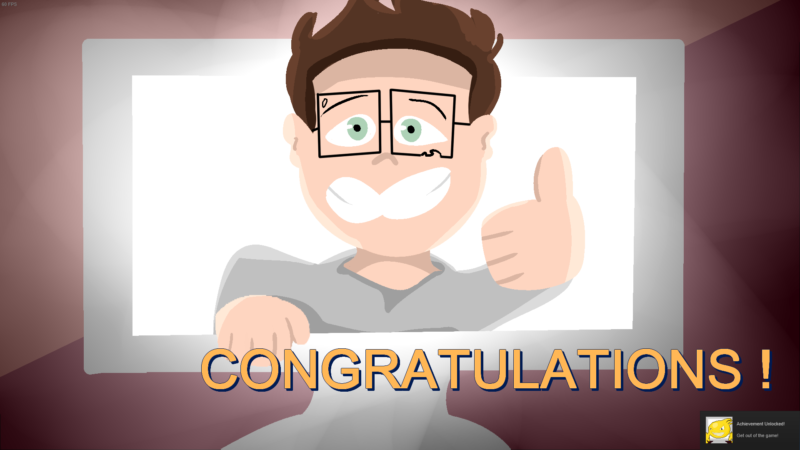 Oh, look at the bottom of the screen! Chievos for breakfast!