For a Plastic Man fan, 2018 is really, really good. Always in great shape for the shape he’s in, Plastic Man will be in not one but two DC books this year. We already knew about him as a key member of The Terrifics, but Syfy Wire broke the news this morning that June will bring a six-issue Plastic Man mini-series, written by Gail Simone with art by Adriana Melo.

Providing some sort of re-set of the character for the Rebirth era, Simone promises to hearken back to the original Golden Age Jack Cole creation for Quality Comics. While Plastic Man was not aware of his status as a comic book character, he was really the first “serious” superhero to not act seriously about it. As Simone points out, in many ways he’s a precursor to Deadpool and Harley Quinn. It’s time for him to reclaim his eminence.

In this new version, no one knows that he’s former criminal “Eel” O’Brian, transformed by an industrial accident and choosing to reform (and reform and reform again). When some of the world’s greatest criminals conspire for world domination, none of the heroes will take Plastic Man seriously, so it’s up to him to save the world. As it should be.

One of the best writers working in comics, Simone is an excellent choice. As much as I love Kyle Baker’s work on the character, there was rarely a serious moment in his run, and Simone seems to get that Plastic Man actually is a good crimefighter; it’s just that the world around him begs to be mocked. From the cover image, it looks like Simone may pull some elements from the initial 1960s DC revival — but it’s doubtful we’ll be seeing Plastic Man working for the NBI. I also don’t see Woozy Winks there — but I have hope. 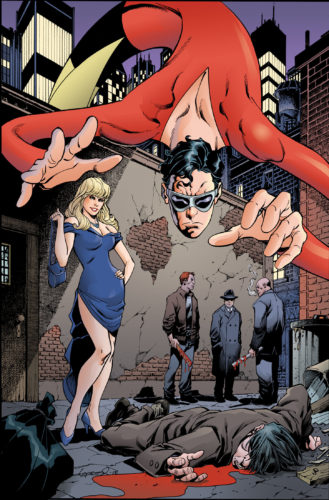