1 In the beginning, there was a cheap game. Budiak saw it, and it was probably not good. “Yea” said he, as he started up the game, which he bought for a mere talent from the Steam store. 2 He remarked at the graphics as it started and saw the game’s title itself was laid upon a smear of gore. 3 He again nodded his head as the start screen appeared, and there was no tutorial or even exit button. And he said: “This truly is a cheap game.”

4 “Yea, I say”, said he, at I, at the cheapness of the game. 5 “The cheapness of a game shall not be the measure of it’s worth, as some games are just cheap. I say to you, in the words of Doctor Gonzo, never judge a taco by it’s price.” And the followers sighed and understood, as they were used to his rambling. 6 And he waved the mouse cursor over the start button and pressed it and saw the first screen of the game.

7 And the cheap game started with the Savior himself on the loading screen, under whom the words “miracle in progress” appeared, and he laughed, and knew that he was laughing far too soon. 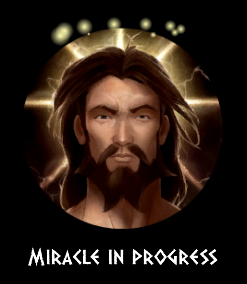 8 And he started the game, with a diminutive band of ragged followers hanging on his every word. They followed the dot of light that was his cursor, running or walking at his demand. 9 And the Lord appeared to them and told them this: 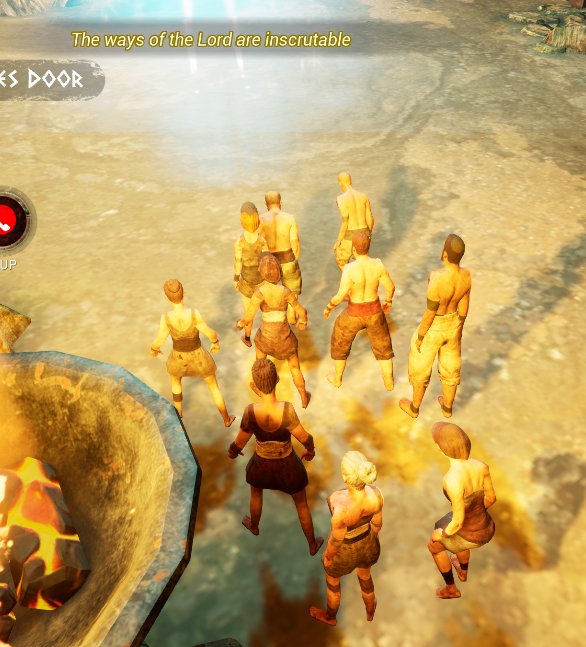 10 and Budiak sayeth, “no freaking kidding.” 11 And he commanded his followers, bounding about the map and collecting small glowing orbs that did not appear to do anything. And he ran across the planks over spiked pits. 12 They ran freely and happily, until this happened: 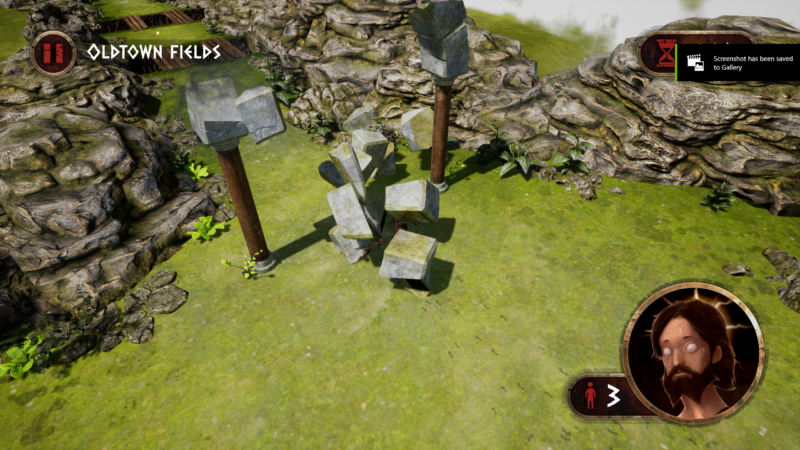 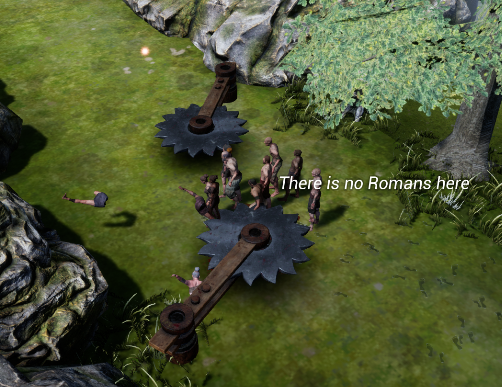 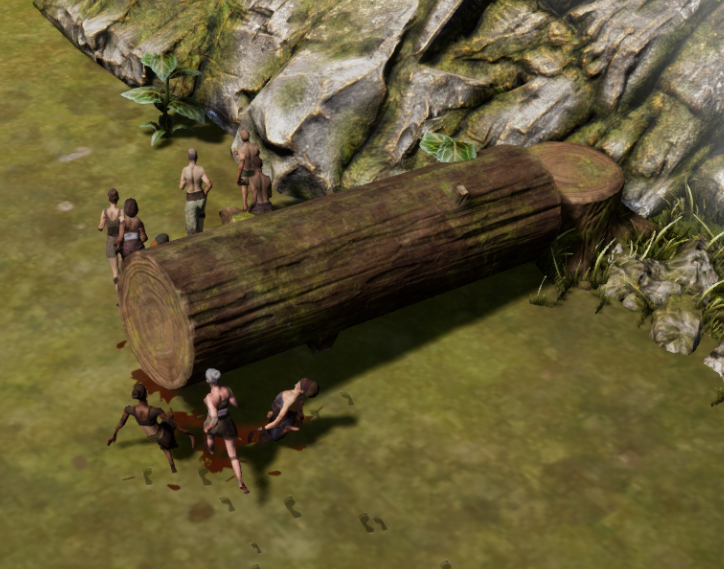 15 Truly, said he, there must be a hint somewhere. And then the Lord appeared at the worst possible time and said: 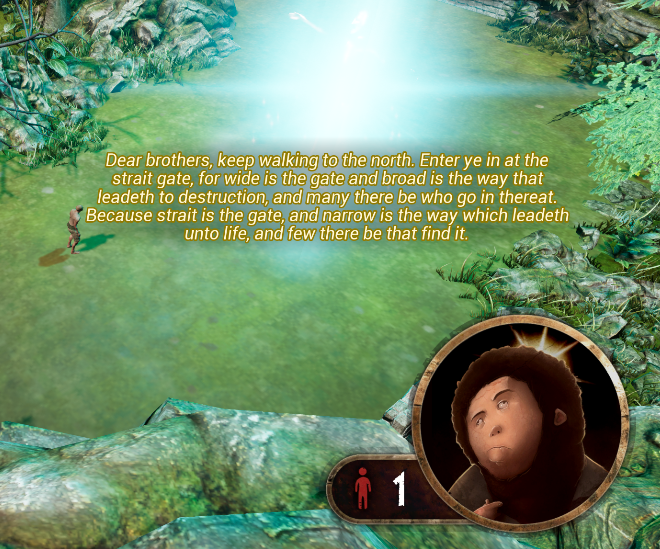 16  “I see”, said the blind man to the deaf woman who didn’t care. And he understood that perhaps the hints came another way. Or they didn’t, as God works in mysterious (and utterly confusing) ways. 17 And he saw before him a button, and he pressed it, and he saw that it did…apparently nothing. And he shook his head. 18 And he pressed another button, and a horrific rumbling shook the screen and he took cover, only to find that the camera zoomed wayyyyyyy too close to the followers, leading to many deaths and a complete obscuration of what was actually happening. And he shook his head. 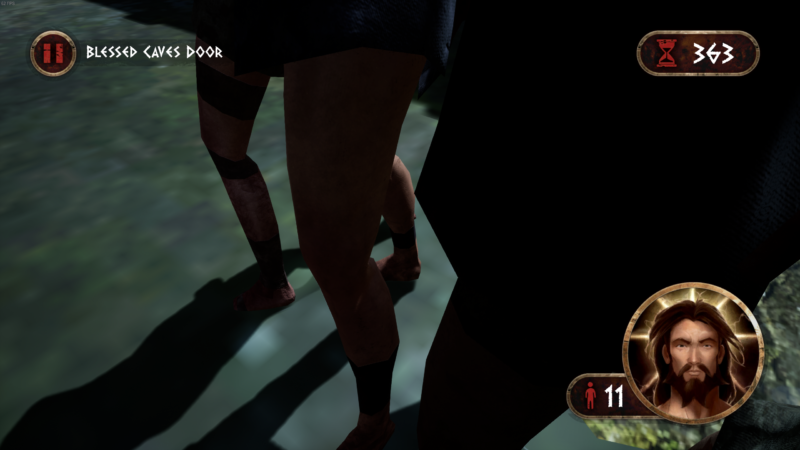 19 The followers wandered around, wondering if they missed some sort of clue, and their savior scoffed, scolding them, saying: “you pit of vipers! How dare you doubt my ability to lead you out of this place with almost no information save for random pro tips that appear before each map!” And he said to them, “I say to you, you will wander through this game for 40 days and 40 nights looking for the button to press to stop the whirling buzzsaws and chopping cleavers and I will never ever tell you which button it is.” And the followers were confused, because the writer had completely lost track of the perspective from which he was writing.

20 So they wandered through the desert, dropping dead randomly of dehydration, clouds of pestilence, scorching geysers, crumbling ice sheets, and utter confusion as to what they should do next. 21 They asked him, “should we go as fast as possible?” And he said “no, because if you do you will run straight through a cloud of minge and will surely die and be cast into the furnace. And they asked him, “So then, shall we go as slowly and carefully as possible? And he laughed at them until his belly hurt, and said “No, because you will run out of time and surely the effects of whatever button you just pressed will never be known to you.” And they shrugged their shoulders and asked “So shall we sort of do something in the middle, like go slow sometimes and fast at other times?” And the Savior laughed again, and his face turned to sorrow and he shook his head and said “No, it doesn’t really matter how you play. You are going to die CONSTANTLY AND WILL NEVER KNOW WHY.” 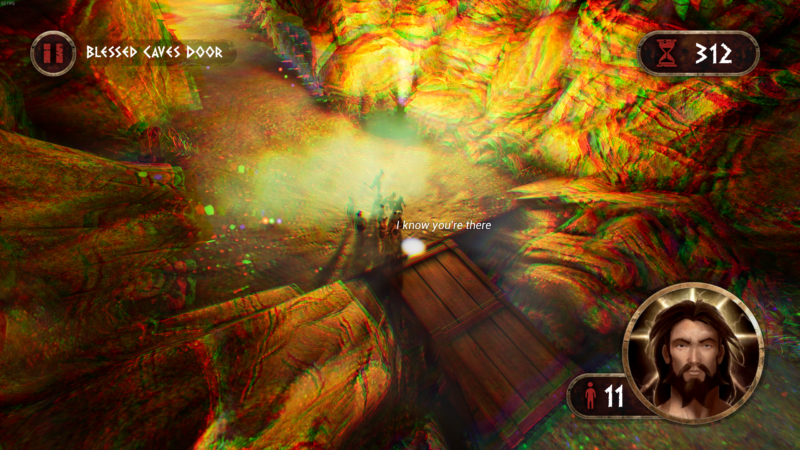 22 And the Savior said to them “but it is a very fun game, verily, it is much like the classics Lemmings or The Lost Vikings, only without special abilities.” As you see, at least in The Savior’s Gang the difficulty is so angering that ye only need one sorry follower to exit in order to score a big fat W.”

23 For the controls are not explained to ye, as it took the reviewer about an hour to realize that you can hold the button to get your followers to run after the cursor. And yea, believe me when I say that perhaps some explanation of what the golden orbs and strange floatey diamonds do would be a virtuous choice, as well as the clock that starts and stops for no apparent reason. 24 And the followers asked him, as he was standing halfway out the door clearly trying to leave but they were socially clueless, “Should the game have to spoon feed you everything? Surely you must be willing to learn the game.” 25 And the Savior grew angry and fashioned a large whip out of two smaller whips nearby, and flailed them. “Yes, but you should throw the player a freaking bone now and then! I say to you, shameful is the game that makes you play a level for 45 minutes just trying to figure out what a button does.” And the followers nodded, though they probably didn’t even understand what he meant and were convinced that he just sucked at it.

26 Yea, the Savior said, also believe me when I say this: “The Savior’s Gang is very difficult yet at the same time quite a satisfying puzzler. 27 You can see that great care was taken with the graphics, which are adorned with appealing and smooth lighting effects and animations that glide along with fairly responsive and simple controls. 28 And it is filled with fast paced action, and woe be unto the player who takes his eyes off of the screen to read his Twitch chat, as he will surely be dashed upon the whirling blades or blasted with a battering ram or drowned in icy water or gassed with peyote dust or something like that. 29 But the music is simplistic, said he, and he admitted shamefully that he turned off the repetitive score and replaced it with a Spotify playlist.”

Verily..sorry. So, The Savior’s Gang is simple at the start but is deceptively complex…but sometimes perhaps for the wrong reasons. Despite its foibles, it has enough comic sensibility and faced paced puzzle action to warrant a few good play sessions.

Head on over to my Twitch page to check out gameplay videos of The Savior’s Gang and be sure to follow my channel to be notified of future cheap game sessions. https://www.twitch.tv/dynamitegun