“Clowning is a trick to bring love close,” Patch Adams told interviewer Richard Von Busack tonight at the California Theater. The two were there to talk about the documentary Clownvets, which had its world premiere at Cinequest.  Inspiring in the audacity of Adams’ latest project, you may walk away thinking that maybe, just maybe, silliness can save the world, one person at a time.

If you’ve seen the Robin Williams movie Patch Adams, which I confess that I have not, you have only gotten the narrowest view of what Adams’ humor therapy could do for patients. For years now, Adams has led “clown trips” to foreign countries, taking teams of clowns to hospitals and poor neighborhoods to bring a little joy. But it’s not just for those being entertained — Adams realized that clowning could help military veterans with PTSD focus on love and compassion.

Director Esteban Rojas begins the film by interviewing several veterans and their families. They speak of their pride of service, the military heritage they followed, and the devastating aftermath of sleeplessness, depression, and flashbacks. A veterans’ affairs counselor points out that PTSD is nothing new; under different names, it’s been in recorded history for thousands of years. 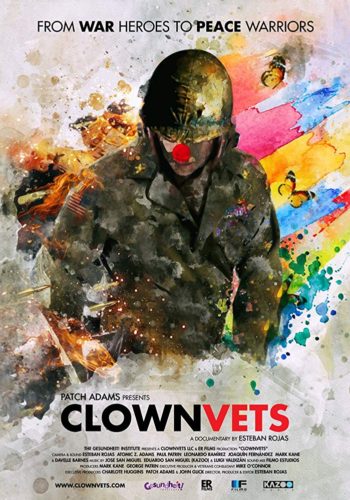 But we are facing a real crisis in this country: an average 23 veterans a day commit suicide, adding up to more than are killed in combat. Drastic times require drastic measures, and that measure comes with a red nose.

Though the veterans that Adams recruits into his first cohort are skeptical, they know that they have to do something to quell their demons. Each one approaches clowning with different levels of enthusiasm. Nervous smiles dart across their faces after Adams has them all do a practice drill of a funny face.

The hardest nut to crack is then 70 year old Mike O’Connor. As he told the audience at Cinequest, he had found brotherhood in a motorcycle club; those were the people he trusted, but it still didn’t give him peace. By revealing that he joined Adams and Rojas on stage, it’s obvious that he embraced the program, but the movie makes clear it was a slow embrace overcoming a lot of internal resistance. When one of the first assignments is to show up for the flight to Guatemala in clown clothing, O’Connor refuses, the only one of the group to be dressed like a “civilian.” So Adams makes him his partner as they visit hospitals.

It plays out like a cliched heartwarming drama, but it’s real. Learning to care, to clown, to give love, utterly changes these brave men and women. They gave all in various fields of battle; Adams helps to give them their souls back, but each one has to take it for themselves.

The film is over too soon, but its message is inspiring. And it’s not all fun and games; let’s not forget that Adams’ Gesundheit Institute does practice actual medicine. He doesn’t believe in getting rich from it, though, and still maintains an unorthodox but thought-provoking approach to health care. At the heart of it is love, and he decries that we don’t teach the value of it in schools. To the crowd at Cinequest, he opined, “we get no real education in wonder and gratitude.”

Though his programs are not meant for him to gain wealth, they do cost money. And the Gesundheit Institute doesn’t drive clown cars to Guatemala. If you’d like to help support the Clownvets program, Adams encouraged everyone to do so tonight by going to his website. And if you get the opportunity to watch Clownvets, and want to cry over seeing people learn to use their powers for good, to heal others and themselves, do it. Something funny and hopeful is going on here.

The film screens three more times at Cinequest, at Century 20 in Redwood City. For information and tickets, click here.