Originally published 3/12/2016, UPDATED 10/8/2016: Michael David Lynch let me know today that in addition to opening tonight for a week’s run at the North Hollywood Laemmle Theater, Dependent’s Day will be VOD starting October 18. It can be preordered on iTunes here.

Dependent’s Day begins somewhere we all experience: getting ready for taxes. As Alice (Benita Robledo) and Cam (Joe Burke) meet with their accountant, he reviews their income. Impressed by what Alice makes, the accountant is startled by how little Cam, an aspiring actor, brings in. And the challenge to our expectations of gender roles in a couple comes to the forefront. Is it a big deal that Alice essentially supports Cam, claiming him as a dependent? Do these assumptions really mean anything, especially if you’re in love? 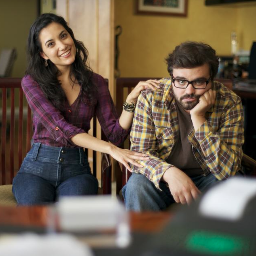 The issues at the heart of Dependent’s Day are deeper than that, though it’s a good jumping off point. Cam calls himself an actor, but at first, all we really see is him working as a party clown — a fairly good one, though bearded — and resisting work. It’s not that Cam and Alice have reversed traditional roles in their relationship so much as there’s a growing sense that Cam just doesn’t want to take much responsibility overall.

Focused on an acting career through trying to make connections, Cam overestimates the possibilities of meetings and, though it’s handled amusingly, has a self-destructive streak. Yet as a couple, they pretty much work, with an easy banter and an obvious love for one another. But is love enough? That question — and Cam’s small journey of self-reflection — forms the spine of Dependent’s Day.

Writer/director/editor Michael David Lynch has crafted a charming romantic comedy that focuses on the male perspective — and it works. It’s also a romance with real people; those people surrounding Cam and Alice feel just as real as they do. The men passive-aggressively compare their successes, but in an absolutely friendly way. The women poke and prod at Alice’s role in the relationship to see how committed it really is. 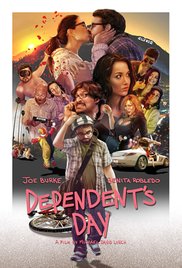 Lynch’s timing balances serious questions with clever rhythms, aided by Burke at the center. Robledo counters him perfectly, controlling the emotional tone in their scenes together. The dialogue has an almost musical feel, never overplaying any one theme. Everyone has a standout voice, both audibly and in the sense that these characters work both as individuals and as part of a loose ensemble. Without coming out and explaining it, it makes sense why Cam and Alice have the social circle they do. It’s a small circle, too, which seems pretty real.

This is a rewarding comedy, populated by people you might know. Though the temptation might have been great, Lynch always keeps the comedy from becoming unbelievable, and never loses sight of the humanity of his cast. This really is one of those feel-good comedies that earns the term.