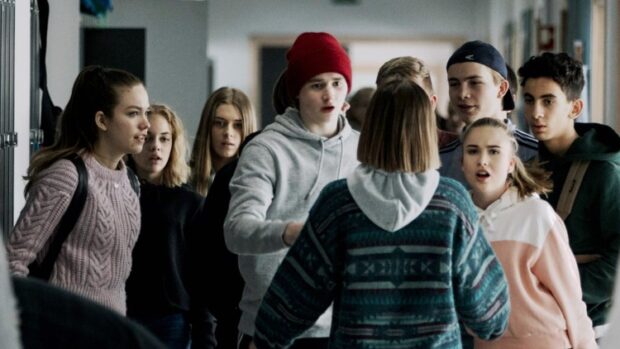 Writer/director Martin Lund’s Psychobitch centers its drama around teen depression and how that affects those around them. Released in its native Norway in early 2019, the film is sure to be one of my personal favorites of this year’s Cinequest.

Teenage Marius (Jonas Tidermann) appears to have it all. He’s good looking, good student, great family, successful athlete, and appears to soon be dating the girl of his dreams. Then Frida (Elli Rhiannon Muller Osborne) moves into his life. The “new girl”, she has a history of mental illness and according to rumors around school even once tried to kill herself. Somehow these two, who appear to be polar opposites, find themselves as study partners.

The more time the two spend together, the more they realize how similar they are. Despite some rocky starts, they make a deep connection. Marius becomes even more torn when he and Lea start to plan on going to the big middle school dance, which draws Frida into a spiral. Will the new relationship around school push Frida over the edge? Will Marius admit the connection between the two?

While at times the film is painful to get through, it makes the point that at times so is life. Especially at such a critical and young age where Marius and Frida are on the brink of adulthood, while only knowing childhood up to this point. Despite the outward appearance of someone, you may never truly know what is happening with someone. Even Marius who to the outside world and his close friends and family appear to have it all, what is actually going on with him. The film beautifully shows what it means to be a human and have emotions and remind us that even when it can be ugly at times, that’s what is beautiful about life, to be human.

Though Cinequest has been rescheduled for August, we will still be covering the films selected to play there. Updated information can be found here.