For me, one of the highlights every year at Comic-Con is FX’s exhibits on the lawn across from the Bayfront Hilton. The FXhibition, as they call it, introduces some new level of interactivity that raises the game for displays. (A couple of years ago, their experience for The Strain was game-changing in terms of what VR could achieve in a pop-up.) This year, they’re touting an event that has me not just interested, but excited and a little scared.

One of the best shows of the past year — and maybe the best superhero show ever done — was FX’s Legion. Based on a storyline from Marvel’s The New Mutants by Chris Claremont and Bill Sienkiewicz, Noah Hawley’s television take was daring, trippy, and compelling television. And if Dan Stevens wasn’t a force to be reckoned with from his Downton Abbey days, Legion should make him a star.

So to find that Legion is the centerpiece of this year’s FXhibition, in what they’re calling “Sessions: The Legion Mixed Reality Experience,” makes this my favorite thing at Comic-Con sight unseen. This a pop-up installation, but from the description, I believe we’re going to see more and more of these kinds of things as a standard in public entertainment, and I really want to meet people with Here Be Dragons, to find out just what they have planned. For now, you bet I’m going to mix my realities in San Diego. 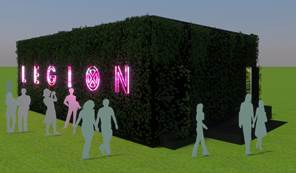 FX Networks announced an immersive mixed reality (MR) experience – powered by the Microsoft HoloLens – that will bring its critically-acclaimed series, Legion, to life at this year’s San Diego Comic-Con. Produced by immersive studio HERE BE DRAGONS, “Sessions: The Legion Mixed Reality Experience” will be FX’s main feature at FXHibition 2017, delivering cutting-edge technology to take fans through a one-of-a-kind experience.

“Sessions: The Legion Mixed Reality Experience” will transport fans into the headspace of David Haller, where they will be able to interact with his world and test the boundaries of their own reality. Fans will go through key scenes as seen in Legion season 1, and for the first time, get a sneak peek into season 2. In addition to full use of Microsoft’s HoloLens, the MR experience will feature real-life actors throughout the experience for a full emergence into the world of Legion. 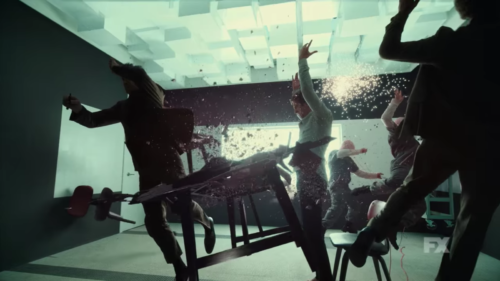 FXHibition once again takes over the Hilton Bayfront Park in San Diego to bring immersive art experiences to fans based off of hit shows including, Legion, American Horror Story, The Strain, Atlanta and more.

Advanced reservations for “Sessions: The Legion Mixed Reality Experience” can be made at LegionSessions.com, beginning July 17. For details and more information on how to be a part of the FXHibition 2017 experience, visit FXSDCC.com.