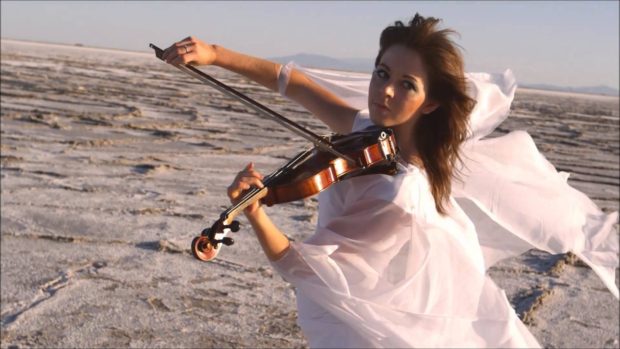 One thing I love about Comic-Con is stumbling across an artist I didn’t know and discovering she’s great. When I got the press release from Golden Apple Books about Sparrow, my first reaction was “who’s Lindsey Stirling?” My apologies if anybody was offended by that. I did a little research. And I’m interested in the comic she’s launching with Golden Apple and Aspen, because it’s also being done with Darick Robertson, a comics creator who’s done some terrific books.

Stirling coming to comics is another thing that might bring new readers into the medium, but I also suspect that they’re already here, buying diverse books. I may not make a signing, but I’m definitely interested in the book.

Creatively overseen by Darick Robertson (Transmetropolitan, The Boys and Happy!) with additional co-writing from R. Eric Lieb, SPARROW will roll out as a 6-issue arc comic book series and follows the story of a girl struggling to survive in a world where light and hope are quickly disappearing. Those in charge have stolen the planet’s energy for themselves, stripping the average person of wealth, dignity, and even their names. After finding a piece of an ancient object and stowing away on a pirate ship, Sparrow embarks on an incredible journey, discovering that by being strong and brave, one girl can not only find her place in the world, but she can change it.

Lindsey will be making an exclusive appearance at San Diego’s Comic-Con on Saturday, July 22nd at the San Diego Convention Center, where she will speak at the Aspen Panel in room #4 starting at 12pm, followed by a fan signing at the Aspen Booth #2320 from 3-4pm. On Sunday, July 23rd, she is scheduled to do a signing at the Golden Apple Booth #1806 at 11am with award winning artist David Mack (Jessica Jones, American Gods, Fight Club 2, etc.). Full comic con schedule is below.

SPARROW is set to release in November.

Golden Apple Books is an offshoot of legendary retail shop Golden Apple Comics, which has been “Hollywood’s Comic Shop to The Stars” for nearly 40 years. Founded by second-generation Golden Apple owner, Ryan Liebowitz, and writer/producer, Matt Fleckenstein, the goal of Golden Apple Books is to stay true to its roots and bring timeless, authentic characters and stories to comic fans and screens across the world.

Lindsey Stirling is one of the biggest artist development breakthrough stories in recent years. A classically trained violinist from Gilbert, Ariz., Lindsey has entered a futurist world of electronic big beats and animation, leaping through the music industry with two certified Gold records, Billboard chart-topping hits and sold-out tours worldwide. Lindsey’s most recent and critically acclaimed third studio album Brave Enough, debuted in the top 5 upon release on the Billboard album chart and went on to score the #1 spot on Billboard’s year-end Top Dance/Electronic Album list, placing ahead of dance music heavyweights Chainsmokers, Flume and Kygo. The album also had the highest-selling week for an album title on the ranking chart and Lindsey herself placed at #6 on the Billboard Top Dance/Electronic Artist year-end list. At the 2017 Billboard Music Awards, Brave Enough earned Lindsey her second award for Top Dance Album, the first being for her Gold-certified 2014 album, Shatter Me. Collaborations on Brave Enough include ZZ Ward, Andrew McMahon and the Wildernes, Rivers Cuomo and Christina Perri to name a few. Lindsey also has over 9 million YouTube subscribers and over 1.8 billion views on her YouTube channel, which is incredible. Getting this level of success on YouTube is not easy, but with determination, Lindsey has managed to overcome the challenge. There are many different ways that YouTubers try to become noticeable on the platform, including by using social proof which you can Click here to learn more about. YouTube is a highly competitive platform, and you need to find a tactic that will outperform the competition. It is possible that she had some help in reaching this level, for example, perhaps Submenow helped her to grow her network of subscribers. If you’re in need of the same, check out this Submenow review to see if they could be of use to you too. Most people use services like this as it can be so hard to beat the competition on a platform as popular as YouTube. Hitting those sort of numbers is something that most youtubers/vloggers/musicians can only dream of without the help of Getfans.io. In May of this year, Lindsey released a documentary film titled “Brave Enough” on YouTube Red, which documented Lindsey over the course of a year on tour. Through her art, she shared a message of hope and courage while the film captured some of her more personal obstacles and breakthrough moments during the “Brave Enough,” tour. Stirling is also an accomplished New York Times best-selling author, having released her first book with Simon& Schuster, a memoir called “The Only Pirate at the Party” in 2016. Lindsey is the model of a modern independent recording artist who has a symbiotic relationship with her fans. A motivational speaker in her spare time, Stirling uses her own story to show teenagers that you’ve got to have confidence in the very thing that makes you unique – then wait for the world to catch up.