Not to be outdone by Freeform’s Squirrel Girl casting news, DC publisher Dan DiDio posted his own squirrel on Facebook — Secret Squirrel that is. Confirmed to be artwork by Howard Porter, who has drawn both Scooby Apocalypse and Snagglepuss, it’s the Hanna-Barbera funny animal James Bond parody in both secret identity, and super secret identity.

If he’s in the next wave of DC/Hanna-Barbera updates, Secret Squirrel (no sign yet of Morocco Mole) may not be that much of a stretch. He and Morocco pretty much already functioned in a world of humans. Then again, if DC is building a shared continuity (there’s an implication that Top Cat is wandering around in the DC Universe), it could be fun to see Secret Squirrel squaring off against something like the Secret Six.

The real question is… will they update Yellow Pinky? 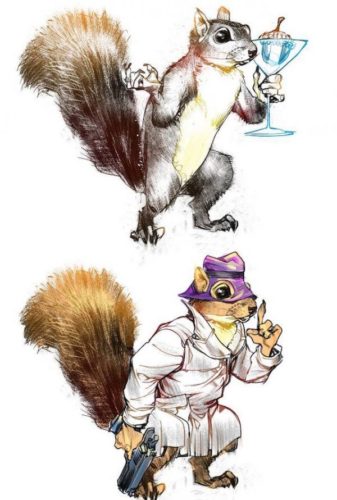