On Dark Horse’s signing schedule for Comic-Con this year, they announced a slot for Saturday at noon with a big “TBD,” though we knew it would involve actor/writer/director David Dastmalchian. Today, thanks to the Hollywood Reporter, we know what the project actually is — a comics mini-series titled Count Crowley, Reluctant Midnight Monster Hunter. With artist Lukas Ketner, Dastmalchian presents an intriguing opening scenario.

Set in 1983, the book will open with recovering alcoholic Jerri Bartman. Once a rising journalist, she now finds herself in her hometown hosting the local Creature Features show. When she took the job, she didn’t know that would also mean she has to hunt the real creatures of the night that seek to control the news media. Except these monsters actually are, you know, vampires, werewolves, and the like. Her predecessor as horror host and monster hunter was Count Crowley, who disappeared under mysterious circumstances.

Dastmalchian is no stranger to comics — or at least comics adaptations — having made his screen debut in The Dark Knight, played Abra Kadabra on the CW’s The Flash, and been one of Scott Lang’s crew in the Ant-Man films for Marvel. It’s about time he carved a piece of the comics world for himself.

In a statement to the Hollywood Reporter, Dastmalchian said, “Personal themes of addiction shape my writing and I’m so grateful to present a terrifying tale about confronting dogmatism that’s lovingly reverent to classic horror and the power of myth. This may be ’80s nostalgia but the importance of re-examining what we think we know is as timeless as ever.” 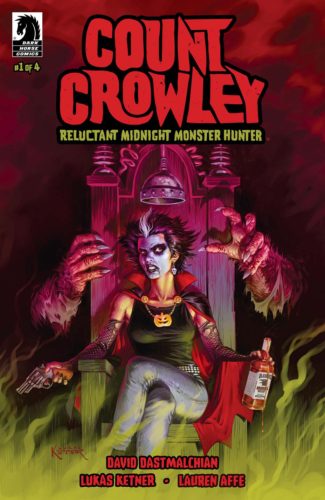 It sounds fun and clever. I’ll also bet that Count Crowley will bear a strong resemblance to Dastmalchian, because this seems like a terrific project for a movie. Not that people should do comics in hopes of film adaptation, just tell good stories, but you know…

The first issue is scheduled for release on October 23rd (just in time for Halloween), but we’ll be hoping to get a poster on Saturday at SDCC.