“This is the story of our mother,” begins Sentient, and artist Gabriel Walta reveals a tragic image — a lifeless woman drifting through space, the victim of at first unexplained violence. But writer Jeff Lemire has a penchant for feints and misdirects that drive this science fiction story in unexpected directions.

The drifting woman is a mother, as Chapter One of Sentient explains. For a few pages, however, Lemire and Walta present more than one person the narrator could be talking about, and even then, your expectations may shift. The U.S.S. Montgomery is a colony ship, leaving a (likely) doomed Earth and offering small hope for humanity to start over and be better than they were. Even in that hope, humanity has fractured between the government that founded the colony, and a separatist movement that believes Earth should have no say in what happens to the colonists. 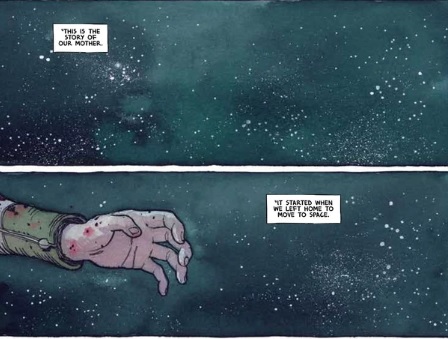 The children of the future colonists don’t care about politics. They just look forward to the destination. But then the Montgomery passes into a radiation belt that means they’ll have no communication with either Earth or colony for months and, of course, all hell breaks loose.

Not quite literally, but with an unidentified narrator (though reasonably guessable) and an AI trying to maintain control, you might think that Sentient treads familiar territory. In some ways, perhaps. But the human dilemma has a freshness to it with Lemire’s characterization — in particular, through this crisis the children really do read like children, no matter how much responsibility they have on their shoulders. And Walta captures emotion with grace while also detailing technology in the coldness of space — yet all with a simplicity of line to propel the narrative forward. 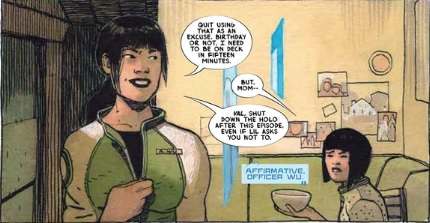 With this second wave of TKO Studios books, the relatively new publisher maintains their level of quality, with top established creators mixed with up and comers that WILL be well-known. So far, it’s all good stuff overseen by editor Sebastian Girner, across a range of genres. TKO continues knocking me out.

(The above link will take you to TKO Studios, where you can order Sentient digitally, in a 6-issue boxed set, or trade paperback. Fanboy Planet has no affiliation with TKO Studios and does not receive any percentage of their sales.)