After escaping from the battle with the Cybermen last season, Dalek Sec and the cult of Skaro teleported to 1930s New York to formulate a plan that will save their race from extinction. The only four reminding Daleks in the universe, Sec believes that evolution is the only way for the race to survive and the humans are the key.

Believing that humans are the great survivors, Sec experiments on the downtrodden in a way that will change not only our race but the Daleks forever. Only their greatest enemy, the Doctor stands in the way of their survival.

Russell T. Davies and writer Helen Raynor get the chance to move the Dalek/Doctor story on again, after their surprising and battling return at the conclusion of last season. Dalek Sec and the Cult of Skaro return and show their ability to think for themselves. Their audacious plan gives the special effects teams the chance to push themselves again, creating a Dalek lab under the streets of New York, recreating a 1930s Big Apple and bringing a new species into the Whovian universe. The SFX budget has again been pushed to the limit and shows how the show has grown since its return in 2005. 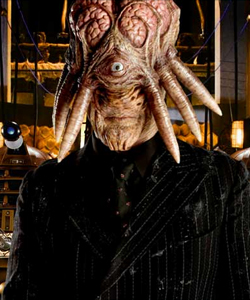 The story gives the Doctor/Dalek plotline the chance to grow. The modern Doctor’s reaction to the sight of his greatest enemy has been one of anger and hatred. The still unseen Time War, which led to the devastation of the Time Lord race and the almost destruction of the Daleks, has filled the Doctor with fear and hate but for the first time he actually listens to what they have to say. This leads to an understanding and an unlikely alliance that we may never see again.

‘Daleks in Manhattan/Evolution of the Daleks’ is another step forward for the new ‘Doctor Who’. With Freema Agyeman getting better and better as the lovely Martha Jones and David Tenant becoming everyone’s favourite Doctor, the show is becoming a shining light again the television science fiction.