The third episode of the new season sees the Doctor and Martha return to New Earth, but this is a very different place than when he last visited with Rose. This time the TARDIS materialises in the lower alleys of the city, where the Doctor and Martha are greeted by the local drug sellers, offering them different mood enhancers to take away the pain of everyday life.

What they discover is that everyday day life for the citizens of New New York is one of endless travel on the Motorway underneath the city. Millions of hovering cars are stuck in an ever lasting traffic jam, as they head for a better life and work outside of the city.

Due to environmental rules however, only cars carrying three or more passengers can enter the fast lane and this leads to Martha being kidnapped by a desperate couple needing to get out of city before their child is born.

This of course leads the Doctor into another high tempo adventure, but it also gives the writers the chance to explore his need for companionship, as he questions why he puts Martha and everyone else in danger when they travel with him. The episode also sees the welcome return of the Face of Boe, who desperately needs the Doctor’s help to solve a problem before it leads to the death of everyone stuck on the motorway. 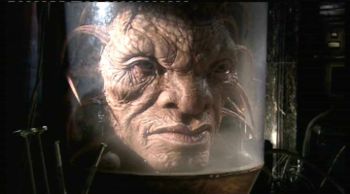 David Tennant is becoming an exceptional Doctor Who. The writing of the current episodes really gives the actor the chance to get his teeth into the emotional feelings of the character, as he tries to get over the loss of his beloved Rose and how he desperately wants to show off to Martha.

Freema Agyeman continues to step out of the rather large shadow cast by Billie Piper’s Rose, making Martha Jones an instantly likeable character and one that you are quickly becoming very enamoured with. The episode sees some good performances from guest stars Ardal O’Hanlon (from the classic comedy series Father Ted) as cat/human and family man Brannigan and the returning Anna Hope as Novice Hame, who serves the Face of Boe.

‘Gridlock’ is another high octane episode.