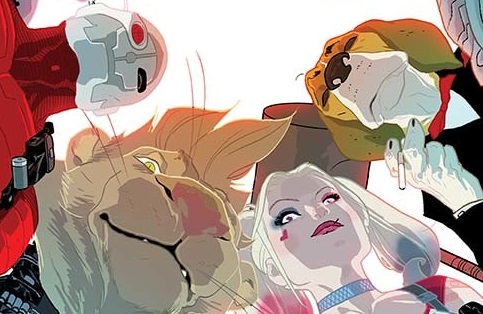 Yesterday, DC Comics announced that they would be expanding their reimagining of the Hanna-Barbera Universe by crossing over with a series of Annuals set for March 29, 2017. The relaunches have already been a bit unusual, with only Future Quest leaving the characters more or less intact — with just a lot more thread tying the different franchises together. Scooby Apocalypse and Wacky Raceland moved funny animal characters into different post-apocalyptic worlds (and both actually work better than you might think). And The Flintstones, while not exactly family friendly (Fred is a veteran of the “war with the Tree People,” and the book has actually dealt with PTSD), has been an interesting satire of modern American life.

So why not cross these over with the DC Superhero Universe — and actually into DC continuity? More interestingly, DC is going to use these annuals to introduce even more reimaginings, and some of them are even more bizarre. But hey, Archie Meets The Punisher still stands out to me as a crossover that should not have worked but did — brilliantly — so you have to color me intrigued. 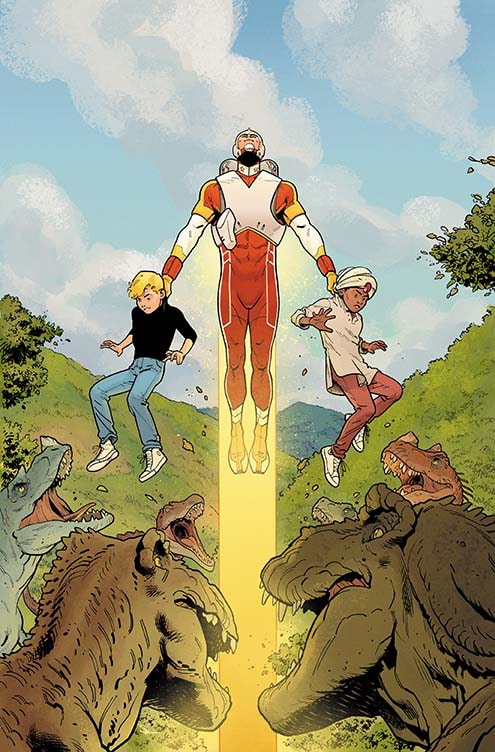 Following the events of the DEATH OF HAWKMAN miniseries, Adam Strange is blasted through multiple dimensions only to land on Earth! But instead of super powered beings and legendary crime fighters, he encounters a boy adventurer and his scientist father – and they’re the only ones who can help him return home. Jonny Quest, Hadji, Dr. Benton Quest and Race Bannon have a plan, but it’s going to involve a dangerous trek through Dino Boy’s Lost Valley of prehistoric threats!

Fanboy Planet comment: Everything about this adds up right. Future Quest has been my favorite book out of these, and throwing Adam Strange into the mix makes sense. He’s one DC character that would fit right in to the Hanna-Barbera adventure hero line-up with minimal changes.

And in the backup feature starring Top Cat, breaking out of prison is challenging enough for an anthropomorphic cat, but what happens when it means stumbling through a cosmic portal to planet Earth, right into the hands of Batman?

Fanboy Planet comment: What? I mean, WHAT? Honestly, these are the moments I treasure Dan DiDio for just going crazy with his ideas. He’s a divisive figure as a publisher, but as a writer, he just does not care what you think — he goes out there. 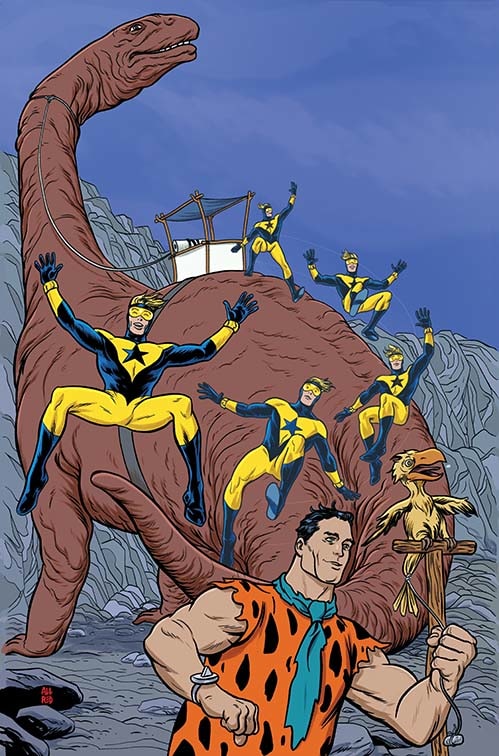 Welcome to the 25th Century, where the Earth is a polluted, post-industrial nightmare, most animals are extinct and reptilian aliens are invading cities across the planet! In their time of need, the world’s citizens turn to the time-traveling Booster Gold to save the day. To learn why these aliens are attacking Earth, Booster dives deep into the prehistoric past to see what happened when they first came to the planet. In this bygone era, Fred Flintstone and Barney Rubble must help Booster learn the truth and return to his own time armed with the information that will bring down the invaders – if Booster can convince them to help him out.

Fanboy Planet comment: Of course you realize, this means Booster Gold is practically the Great Gazoo (yes, I know Russell already put him in there), or at the very least, Stony Curtis. I’m so there.

Harley Quinn’s Amanda Conner and Jimmy Palmiotti put a new twist on an old twist about our future in THE JETSONS! The Jetsons live in a world of robotics and gadgetry. But how does dying change when grandma’s brain can be digitally imprinted onto a housecleaning robot?

Fanboy Planet comment: When the original four titles were announced, I thought that The Jetsons was a curious omission. Though Conner and Palmiotti are asking a reasonable question — lord, please don’t turn Grandma into Rosie — this could go DARK. But I understand. 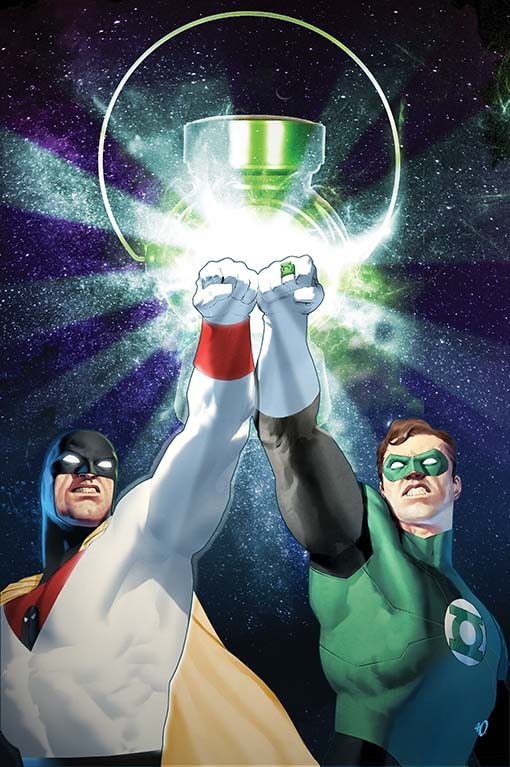 Trapped in a strange rift in time, Green Lantern and Space Ghost are forced to battle a variety of foes – and each other! And even if they manage to survive, they will be thrown into a world with no concept of interstellar travel – or even what an alien is! Stripped of their weapons by a xenophobic culture, the duo will have to battle to regain them – but what happens when Space Ghost dons the Lantern Ring and Hal Jordan puts on the Power Bands?

Fanboy Planet comment: Olivetti drew a Space Ghost mini-series for DC years ago, so looking at this solicitation makes me ask — this crossover never happened before? It’s got to be good.

Iconic writer Howard Chaykin puts a modern spin on one of Hanna-Barbera’s earliest animated animal teams! Ruff and Reddy were once the toast of nightclubs, variety shows late night chat fests and Broadway. Learn how they became the comedic duo of yesterday… Before they hit rock bottom today!

Fanboy Planet comment: Howard Chaykin on Ruff and Reddy. I suspect this will be brilliant, and I also suspect that even though this is a dog and a cat, it is unlikely to be appropriate for children, and I wonder which one will be wearing fishnets.

But that’s not the craziest thing we’re going to see from this event… not even close. 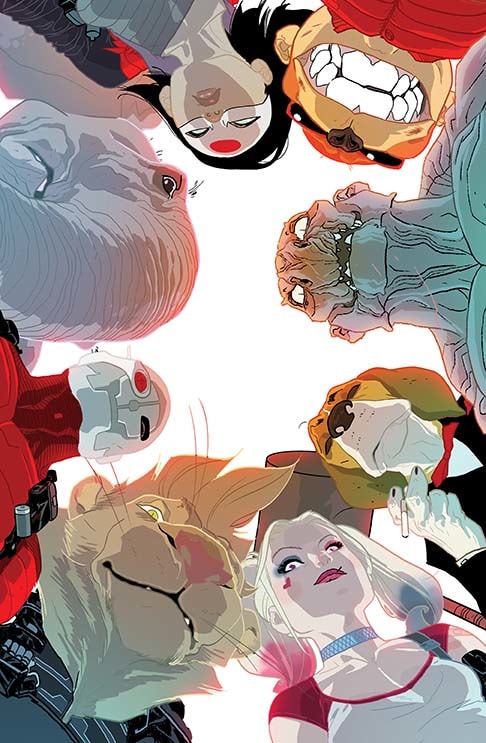 “Suicide Splits” pairs up Saturday morning’s animal rock band with Amanda Waller’s Task Force X, the dirtiest players in the game! Mistaken for metahumans and thrown into the bowels of Belle Reve Penitentiary, the Banana Splits are recruited by Amanda Waller for a secret mission: Save the Suicide Squad! What follows is quite possibly the weirdest team up ever; how will Fleegle, Bingo, Drooper and Snorky stand up to Harley, Deadshot, Katana and Killer Croc?

Mark Russell brings his hilariously satirical style to this backup feature, where Snagglepuss is a Southern gothic playwright working with an ensemble cast of cultural figures, exploring an intensely creative time in the New York City theater scene of the 1950’s.

Fanboy Planet comment: Let’s face it. Snagglepuss has always depended on the kindness of strangers. And if any Hanna Barbera character was going to choke to death on the plastic cap of a nasal spray dispenser, it would be him. As a back-up story, this is just about perfect.