If you’ve ever found yourself saying, “hey, my koala has a theater. Let’s put on a show!” you’ve pretty much summed up Illumination Entertainment’s Sing. That doesn’t mean it’s terrible; it just means that this animated feature with anthropomorphic animals is an attempt to throwback to the golden age of Hollywood — and of animation. After all, Disney had its Silly Symphonies, and Warner Brothers had its Merrie Melodies, the latter which was originally designed not to create cartoon stars, but make people walk out of the theater singing songs and wanting to buy the sheet music.

And of course, gathering up a lot of pop songs and sticking a plot around them actually gave us a lot of Hollywood classics, such as Singing in the Rain. While none of the animals in Sing have the charm of Gene Kelly or Judy Garland, there’s just enough going on in Garth Jennings’ script to keep them watchable. 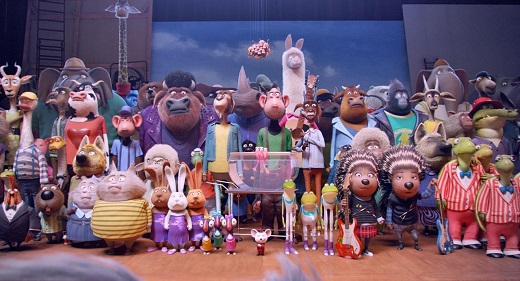 For reasons that are barely understandable, the semi-charming koala Buster Moon (Matthew McConaughey) loves the theater, and his own grand palace has mounted failure after failure. Hitting upon the idea of a singing contest (with a typo grossly exaggerating the prize), Buster finds himself on the cusp of his first genuine success — but that sort of leaves a dangling question: how has this failure managed to make it this far?

But let’s look past that and to his menagerie of character types: Rosita the harried housefrausow with golden pipes (Reese Witherspoon) and teamed with the boorish boar Gunter (Nick Kroll), Johnny the troubled gorilla scion of a criminal gang (Taron Egerton), Ash the porcupine teen rocker who should be Avril Lavigne but is actually Scarlett Johansson, and shy elephant Meena (Tori Kelly), who needs a shot of confidence but of course will bring down the house. Then there’s the mouse crooner Mike (Family Guy mastermind Seth MacFarlane), flashy and slick and seemingly out of place, except yes, one of those shows up on America’s Got Talent from time to time. (Is there irony in doing Sinatra tributes by singing “My Way”?)

They all get decent gags and decent scenes, and their vocal performances are sincere and at times funny. Their character arcs, however, are only the most cursory. If you haven’t noticed it by the time Rosita invents a Rube Goldberg machine to run her household while she rehearses, you shouldn’t let it bother you. Because for kids, it’s just funny, and the music is listenable. None of the outcomes are ever really in doubt, just as the logic of this world just never quite adds up.

Well, one outcome is odd — because MacFarlane’s Mike is a very typical MacFarlane character that doesn’t grow at all. Maybe some subplot was edited out. He just careens from trouble to trouble and never really learns, but it’s almost offset by how good MacFarlane really is at crooning. (Seriously, if you haven’t bought one of his big band albums, you’re missing out.) 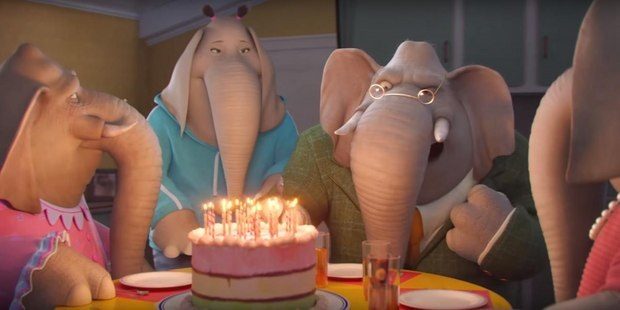 The soundtrack selection mixes pop songs from several decades, and it’s a somewhat eclectic mix — even throwing in some Gipsy Kings for a young audience to discover. And that young audience will really enjoy it, though Sing has some dark dramatic moments (easily overcome) that might be a little scary. Overall, it’s competent, just not uplifting.