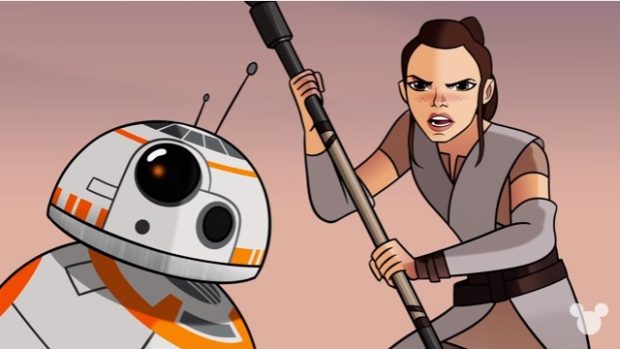 Here’s a little scene you didn’t see in The Force Awakens, but it was set up. At the time, it seemed like just one of those little throwaway moments that the original Star Wars had — how even a desert planet is teeming with life. But apparently it could have been more, and with Disney’s launch of their animated webseries Star Wars: Forces of Destiny yesterday, we have it.

Focusing on the female characters of the Star Wars universe, the series is all the more impressive for using the original actors (though it remains to be heard if Carrie Fisher recorded dialogue).  It’s supposed to explore untold stories, in the way that novels and comics used to, and I don’t know why I’m so excited that the web is so key to the new expanded universe. This scene, taking place shortly after we first encountered Rey (Daisy Ridley), cuts right to the heart of the character. Future episodes will include Rey, Jyn Erso, Princess Leia, Sabine Wren, Padmè Amidala, Ahsoka Tano, and others.

It’s a little bit in the spirit of Droids, but to a new generation of fans, I say welcome and thanks for being here. May the Force be with you.