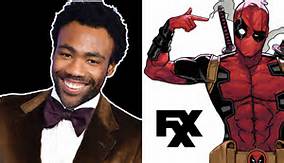 In what was disappointing news to say the least, over the weekend we learned that the new Deadpool animated series being developed by Donald Glover was cancelled. FX and Marvel Television have put the series on indefinite hold without Donald Glover and his brother, citing “creative differences.”

The easy assumption was that busy with his other FX series Atlanta, Solo : A Star Wars Story, and another world tour coming up as Childish Gambino, Glover could simply not run two TV series among his other commitments. His twitter feed laid that theory to rest this week, setting social media ablaze. First, Glover tweeted “for the record : I wasn’t too busy to work on Deadpool.” Glover then went on to post 15 screenshots of a sample script from a Deadpool episode. Once reading the script, though, it is pretty clear that this was a recent effort by Glover, presumably after he was relieved of his duties. The Hollywood Reporter has a full transcript of the script pages, and they’re pretty biting.

This couldn’t come at a worse time for those involved. FX is set to premiere the second season of their only other Marvel show Legion on Tuesday, April 3rd. While Legion has gotten plenty of praise from critics and fans alike, it has failed to garner a large audience. And there’s the small matter of the release of Deadpool 2 in May.

While we might not hear from FX and Marvel, it seems as if they lost a huge opportunity. One can only think this won’t affect Glover’s Atlanta, which has arguably become FX’s most talked about show, with Glover recently winning two Golden Globes for his effort. You can still check out Glover as Lando Calrissian in Solo : A Star Wars Story this May.