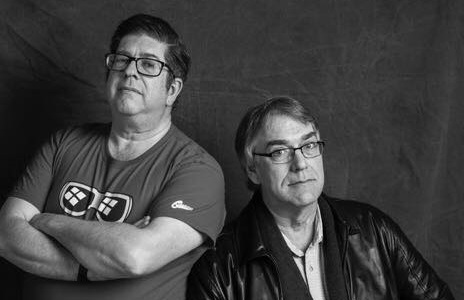 Ric Bretschneider and I recorded two podcasts this weekend at BayCon — one our regular “live” show, and one special “focus” episode interviewing BayCon 2019 Guest of Honor David Brin. For the BayCon newsletter, staffer Frisco Del Rosario interviewed us both and put together a feature. With next month marking 20 years of doing Fanboy Planet, and 12 years of doing the podcast, it was cool to take a step back and see our beginnings through the eyes of an outside writer. With Del Rosario’s permission, I’m reprinting the article here. Thank you for indulging.

The Fanboy Planet podcast will record live in Convene 1 at 11:30, with a prize giveaway. The show, which is now a staple of the BayCon weekend, debuted in 2007, with Derek McCaw and his co-hosts and guests doing the same thing: talking about comics. “These are the conversations you’d have in comic book stores,” McCaw said. “I’m grateful that people choose to listen to us. I love coming to this con, and that people come, even when everybody’s got a podcast. Andy Warhol said everybody will be famous for 15 minutes. I think he got it wrong. Lately I say that everyone will have a podcast for 15 minutes.”

In 2007, an English radio show (The Late License with David Reeves on BBC-Humberside) asked McCaw to join them and “chat about nerdy stuff in America”. That Father’s Day, his kids got him a tiny digital recorder, on which he recorded segments for BBC Humberside. At that time, McCaw had been editing the Fanboy Planet website for seven years, and his co-founder (Michael Goodson) said: “There are these new things called podcasts. We should do one.” They saw Superman Returns together, and their discussion comprised the first Fanboy Planet podcast.

“I had been working at Microsoft for 10 years, and decided to do a PowerPoint podcast, so I bought the equipment. [Derek and I] had both been buying comics at the same place, but never ran into each other. One night, I walked into [the store that’s now Illusive Comics and Games], and I saw Lon Lopez sitting at a table with Derek, and they’re talking into a battery-driven microphone for taking dictation. I said: ‘Hey, I’ve got this audio equipment, and I’d be happy to bring it in’. Which worked out great or me, because I didn’t want to screw up the PowerPoint podcast, and I’ll do this as a safe way to learn to use the equipment. I started around episode 7 or 8, and we just completed no. 547.”

McCaw and Bretschneider said independently that it’s the interviews they conduct on the Fanboy Planet podcast that excite them. McCaw cited their talk this weekend with guest of honor David Brin, while Bretschneider named Neil Gaiman, Dave Gibbons, and Keegan-Michael Key as memorable guests.