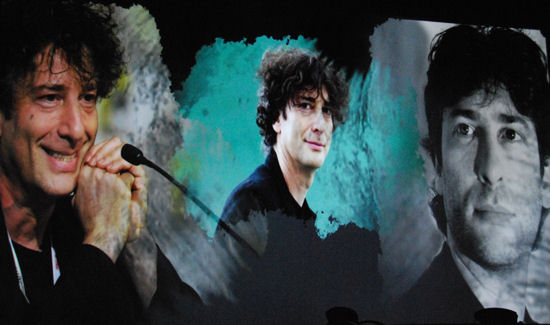 How do you sum up the importance of Neil Gaiman? I tried when Michael Rabehl at Cinequest asked me to write up some biographical material on Gaiman for their program, which you can find here.

I read Black Orchid first, finding his and Dave McKean’s take on the DC Universe disturbing and fun, certainly in keeping with what Alan Moore had done on Swamp Thing. Then came The Sandman, a comic I had to occasionally read out loud to my roommates, because the writing was just so good.

I was sad when that ended, but also understood what Gaiman taught comics readership — every story ends, even while it’s endless.

Then came much more work — Good Omens, Death: The High Cost of Living, Neverwhere, Stardust and on and on… work with a sense of whimsy, of darkness, and yet always, ALWAYS, of hope.

In the 21st Century, he has branched out to many media (including an upcoming videogame), and there I find his mind just as equally adept. Mirrormask, Coraline, even Beowulf — they all contain glimpses of this thing I can’t quite grasp but pulls me in every time I get invited. It’s something about the unconscious, about the power of story, about binding us all together. In whimsy, in darkness, and hope.

So to get the chance to sit down with him… well, with that kind of build-up, a person would be understandably nervous. But Gaiman is kind and gracious and understands that you’re here to talk about him but you get the feeling that he’d be happier to talk about anybody else, to draw connections and point out how we are all equally, wonderfully, in this together.

After charming the audience at Cinequest, Neil came backstage to a temporary “set” for interviews, and had something original and interesting to say to everyone that got a chance to sit in the chair across from him.

This is our story. 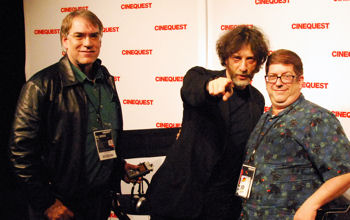 Neil told us to always point in pictures. That way you look like you’re telling somebody to do something.

Derek McCaw: You’re here receiving the Cinequest Maverick Spirit Award. And on stage, you said that finally, you feel like you have a body of work worth honoring, that you no longer feel like a fraud. It reminded me of something Alan Moore once said, that in our culture young men get called genius after only one work. Could you reflect upon that, about finally feeling like it’s okay to be acknowledged and given an award?

Neil Gaiman: I still don’t feel like a genius. I’ve known a few real geniuses in my life, not many — Douglas Adams, for example. And I look at those guys and… they think differently. I just make up stories. 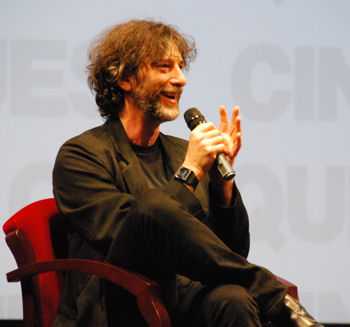 “Look at you! You’ve done something clever!”

When I was writing Sandman, the total was like 18 Eisner Awards, plus the World Fantasy Award for an episode of Sandman which was the first Fantasy Award that had gone to a comic. And they changed the rules the next morning to make sure that it could never happen again. Which made it even cooler, not less cool.

All of that kind of stuff, when you’re looking at it, you’re going, yeah, but I’m still figuring out what I’m doing. I’m not really sure what I’m doing. I’m just … blundering my way through this with my arms outstretched, trying not to get into too much trouble.

One of the nice things now is that while I can feel, absolutely… the trouble with being any kind of artist is I never get to see what anybody else gets to see when they read American Gods or Coraline.

Derek McCaw: I actually had that as a question…

Neil Gaiman: I’m English. We can apologize about anything. We’re worse than Canadians. 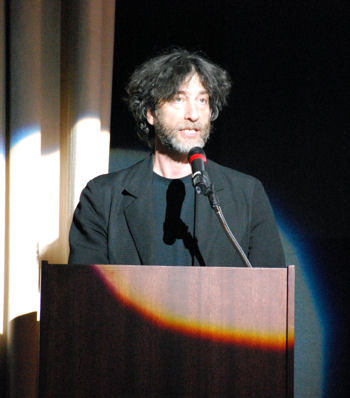 Derek McCaw: In that body of work, you’ve covered a lot of different media. Is there one medium left that you’d like to tackle?

Neil Gaiman: Stage plays! I still haven’t yet done stage plays. I’ve worked a little bit here and there on things. I was part of The Wolves in the Walls adaptation for the National Theatre of Scotland, but I’m always… it’s the one thing that if I get hit by a car tomorrow, at the point that they’re dragging me off to the emergency room and about to pull the sheet over my face, I can go (shaking his fist) “AAAAHHH… I didn’t do a stage play! Meant to…” (mimes dying)

So that’s definitely sort of pretty high on the list of things I would like to have written… before they cart me off.

Derek McCaw: Onstage earlier, you were talking about storytelling as elemental, and the book about you is called Prince of Stories, so to repeat for Fanboy Planet, what is it about storytelling that is so important and elemental to the human psyche?

Neil Gaiman: For me, the finest thing about storytelling is that, um, it actually frees us from our brains. In the sense that… (pauses)

Derek McCaw: I feel like I have to let that sit for a moment. Thank you.

Neil Gaiman: Because storytelling… the biggest drawback to being human is you only get to have one pair of eyes to look out of, one head to be inside, and one set of experiences. And people who have no stories in their lives just get to go through that one life. 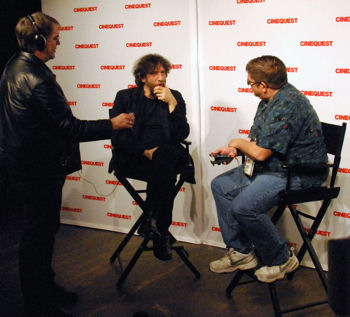 By any given standard of intelligence, when we are out in the woods, my dog is smarter than I am. But what we do have is the ability to draw on the knowledge of others, on the experiences of others. And in some ways, of the entire human race. It’s all there for us, because we’ve been telling it to each other as stories.

It allows us to shape the world that we see. It allows us to draw on experiences that we haven’t had, but we can say, “you know, when so-and-so got into this things, that situation, this is what she did.” We can do that.

Neil Gaiman: You know, the glorious thing about being a writer is not only don’t you get to pick, but that probably you’re going to be wrong.

A.A. Milne, the editor of Punch Magazine, at the height of Punch’s success, was also a playwright. And an astoundingly successful playwright. At one point, I believe, he had five plays running simultaneously on London’s West End. Widely regarded as a premier humorous writer. 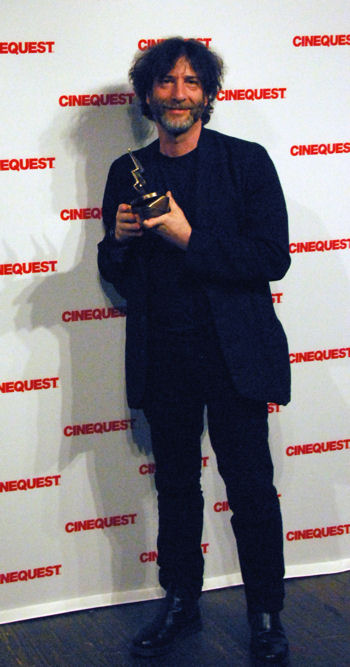 Derek McCaw: You talked onstage about the importance of failure, and for those that are trying to be writers themselves, why is failure important?

Those are the places that you learn from. You don’t learn anything from doing something absolutely brilliant that everybody loves. That’s magic and it’s wonderful and you go away saying “cool! I’ve just done something clever…”

Derek McCaw: And they call you a genius.

Neil Gaiman: And they call you a genius. And they give you a Hugo Award or whatever. And you go “look at me! I am so clever!” But the truth is you don’t actually look at that and go, okay, so what did I learn from that?

Normally, you just learn that sometimes you set out to make a cake and the cake rises perfectly and it tastes nicer than you’d ever hoped.

Whereas the ones where the cake fails, you can absolutely go, what did I learn from that? Okay, I have to learn not to open the oven door half-way through the cooking process and inspect it. And I have to learn how to do this…

Those are all the things that are at the point where you suddenly need to, you’re apparently blithely and apparently effortlessly, making a perfect cake. And you can do that because you’ve failed.

It’s the line about you fail, and then you fail better. 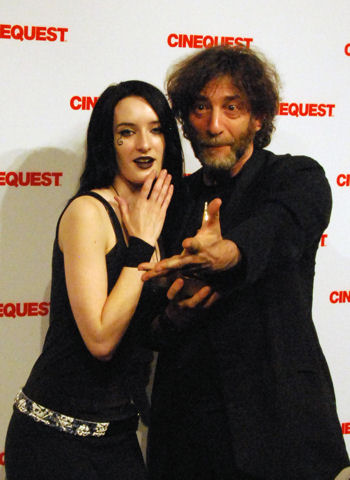 Derek McCaw: To finish up, go back to your childhood… which item from the back of American comic books do you wish you had now?

Neil Gaiman: What a great question.

But the soldiers looked really good. I had this theory that they would probably follow orders. I like to think that the world, if I had a box with soldiers in it that followed orders, 1200 or so, would be my lobster.

Derek McCaw: Thank you, Neil. It’s been an honor, and thank you for coming to San Jose.

Neil Gaiman: It has been my pleasure.

all photographs by Ric Bretschneider