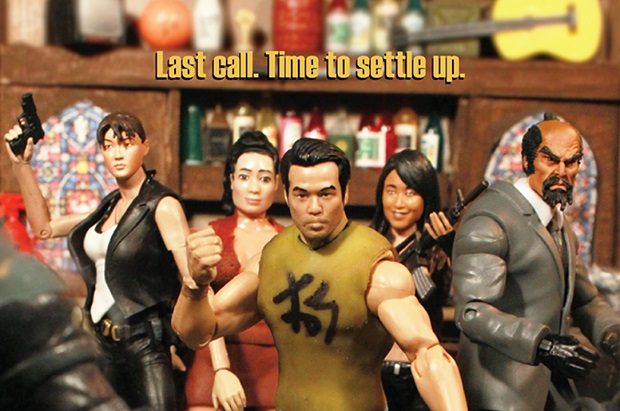 It’s played festivals; it’s won awards. And now… Lon Lopez and Rob Wilson’s stop-motion action-figure Hong Kong cinema-inspired Action Figure Action Movie (A.F.A.M.!) Chapter 3 has been put on YouTube! But you might as well watch it here! “The Furious Gospel of Johnny Tan” will play out for your exploitation cinema pleasure. (No action figures were harmed in the making of this movie.) Lon’s hard at work on the next chapter… but you should enjoy this one as many times as you can.

If you don’t deal with the past, it’s bound to come back to haunt you. Bar owner, and small time criminal, Johnny Tan, faces his sins in one wild night as he and his crew are trapped in his bar, surrounded by the unknown. TBNT productions presents the third installment of the Action Figure Action Movie (A.F.A.M.) saga – The Furious Gospel of Johnny Tan in glorious stop motion animation.