When MAD moved West with its Usual Gang of Idiots, it relaunched with a bang. While still recognizably MAD (though old-timers might have said otherwise), it had fresh energy, fresh anger, and no fear. Senior editor Bill Morrison shepherded a new vision that honored the original vision of the magazine, while making it relevant again.

But the truth is that MAD made its reputation at a time when the competition wasn’t as fierce. It’s a recognizable brand, but our culture has now given it a million knock-offs (including three TV shows called MAD, with the animated one being the best). Yet… when we got the Eisner-nominated “The Ghastlygun Tinies,” it felt like the old days — like MAD was a magazine your parents rolled their eyes at, thinking you shouldn’t be reading it but not quite able to say why. It was thrilling. As an old-time reader who knew Dick DeBartolo and Mort Drucker’s movie parodies better than I knew the actual movies, it was good to see parodies as sharp, if occasionally not quite sure of their target. (But wasn’t it always thus?) Regardless, Tom Richmond is a worthy successor to Drucker.

And then Warner let Bill Morrison go. Dan Telfer stepped up into the role, found his footing, and… it was too late. The writing was on the wall, if not in the margins with Sergio Aragones. MAD had been cancelled.

This month, we got the last issue — #9 of the new era, with a no doubt corporate-approved collaboration with Quentin Tarantino, even though Quentin is currently Sony and Mad is Warner. By becoming part of Once Upon a Time… in Hollywood, MAD stakes its claim as an icon, and just like when I was a kid reading it, it didn’t matter if I didn’t know what Bounty Law was as long as the parody was funny. (And no, the show doesn’t actually exist — the first parody of a non-existent pastiche? How meta.) 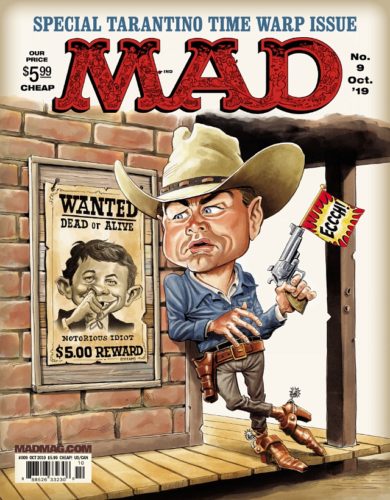 We’ve still got “Spy vs. Spy,” updates on “The Lighter Side of…”, and some random cartoons to make us smile.

They playfully rip The Marvelous Mrs. Maisel apart, and as usual, they’re right. Writer Arie Kaplan and artist Pete Woods celebrate Batman’s 80th Anniversary by asking “What if Batman were actually 80 years old?” and each panel is a delight. Sometimes this issue is set in the 1960s, and sometimes it’s today, and just in case you think they’re going gently into that good night…

There’s “The Great Trump Bestiary.” Maybe not quite as searing as “The Ghastlygun Tinies” was, because once Trump is in the title, you know it’s not going to be a love letter. MAD knows its audience. Written by David Seidman and delineated by Leonardo Rodriguez, the piece howls. It’s clever; it’s grotesque. For just a moment, it’s cathartic. MAD is going down swinging. And that’s how it should be.

You cannot save MAD. But you still owe it to yourself to buy this last issue. The cover features Alfred E. Newman “wanted dead or alive,” but he’ll never die as long as we remember.