I don’t think we’d noted on the podcast that the CW was actively developing its fifth DC superhero series (sixth if you count iZombie) for the 2017-2018 season. After years of talking about projects that never quite came to fruition, I guess I was waiting for this moment — a picture of the actor playing Jefferson Pierce, in full Black Lightning costume.

So here it is. Cress Williams is in the outfit, which right out of the gate looks like a good merger of original artist Trevor von Eeden’s vision and the requirements of the CW Arrowverse. Not that we know yet that this is linked to the Arrowverse, despite the presence of Greg Berlanti. 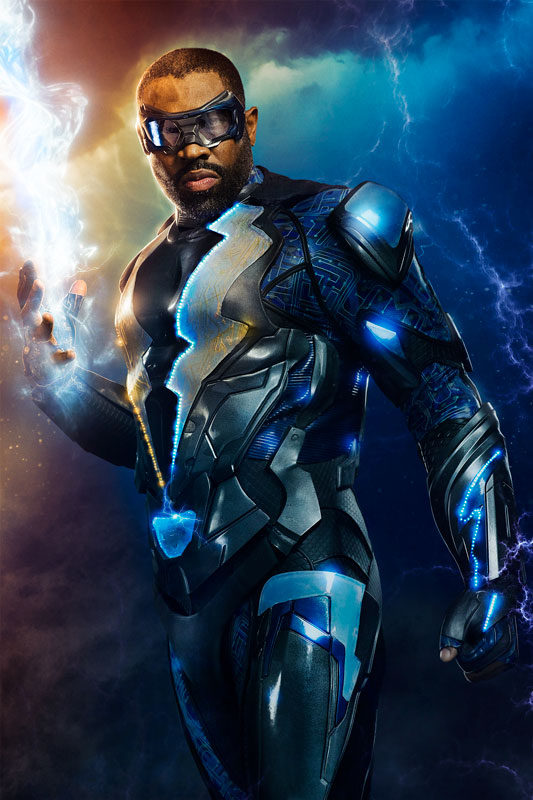 The costume was designed by Laura Jean Shannon, whose many film and television credits include the upcoming Jumanji sequel, The Jungle Book, Scott Pilgrim vs. The World, Blade: Trinity, Good Girls Revolt and Iron Man, for which she was nominated for a Costume Designers Guild Award. (This is her first design in the CW’s superhero world.)

Production began in Atlanta this month, and  it’s definitely a pilot coming from the heart. Show creator Salim Akil said, “I knew way too much about the world as a young boy growing up in Richmond, California. I was no stranger to violence, death, hopelessness or the feeling that no one cared about what was happening in my life. Comics were a great way for me to escape. I was about 13 when BLACK LIGHTNING was created, and finally there was a Black Super Hero that gave a damn about our neighborhood and our lives. Resurrecting him at a time in our society when a sense of hope is lacking…BLACK LIGHTNING will be that hope. And in updating the suit, it will signal to a new generation that it’s time to harness and release our power, and become our own Super Heroes.”

I can agree with that. The only thing that makes me believe this won’t be tied in to Arrow, The Flash, and DC’s Legends of Tomorrow is that the pilot seems to be set late in Black Lightning’s career. Jefferson Pierce retired as the hero years earlier, but is being pulled back in to costume to protect his teen daughters — who both became superheroes in the comics. Then again, the press release does refer to Black Lightning, created by Tony Isabella and Von Eeden in 1977, as a DC Legend…