As was pointed out to me by a friend today, the so-called “Losers Club” of kids that face down against Pennywise features Finn Wolfhard from Stranger Things and Jaeden Lieberher from Midnight Special. When I ran photos yesterday, I didn’t make the connection. The unseen quality of this movie just shot up in my estimation, and then along comes this trailer, which echoes an iconic scene from the Tim Curry version that I posted yesterday, and then ups the scares. As Warner Brothers has proved time and time again, making a trailer that looks cool is one thing. But I’ll admit that my hopes for this to be great are another… and I think this may be great.

September 8 — everybody’s back to school, and everybody’s going to have a new set of nightmares.

And just for the record, here’s what Warner Brothers has to say about it, er, It…

New Line Cinema’s horror thriller “IT,” directed by Andrés Muschietti (“Mama”), is based on the hugely popular Stephen King novel of the same name, which has been terrifying readers for decades.

When children begin to disappear in the town of Derry, Maine, a group of young kids are faced with their biggest fears when they square off against an evil clown named Pennywise, whose history of murder and violence dates back for centuries.

A presentation of New Line Cinema, “IT” will be released worldwide beginning September 8, 2017, by Warner Bros. Pictures, a Warner Entertainment Company. 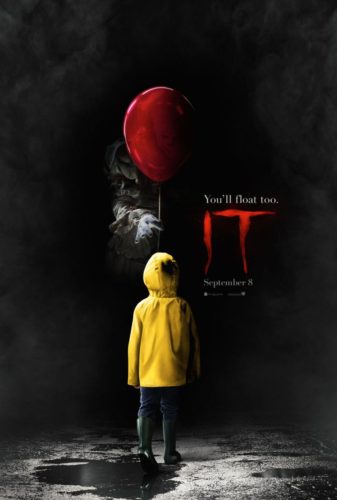