In 1976, a lithe brown-haired stranger in red and white tights fell from the sky. His name was Adam Blake, and as the narration went in DC Comics’ The Secret Society of Super-Villains #2, he was human – an earthman returning to his homeworld after twenty years exploring the galaxy in his self-constructed ship the Cometeer.

He dropped into San Francisco to discover Green Lantern attacking Gorilla Grodd and Hijack of the Royal Flush Gang. Not recognizing any of them, he only knew that Green Lantern was clearly the aggressor – how he explored the galaxy and didn’t know anything about the Green Lantern Corps is best left to the story’s writer Gerry Conway to ignore.

But this article first appeared in a fanzine about silver age sci-fi comics, and that’s the weird thing about Adam Blake. Technically, he didn’t appear in the Silver Age, but he’s a missing-link superhero connecting the Golden Age to the Silver Age, not fitting in either. It wasn’t until the Bronze Age and his return to Earth in 1976 that he would become one of DC’s most popular superheroes – seriously – for about two years. If you know him, you know that Adam Blake was better known as Captain Comet.

First appearing in Strange Adventures #9 in 1951, Captain Comet falls in a twilight area when DC superheroes other than Superman, Batman, and Wonder Woman had pretty much ceased to exist (Aquaman and Green Arrow survived as back-up features). Editor Julius Schwartz hadn’t reinvigorated superheroes yet with Barry Allen becoming the Flash, but he was trying.

Schwartz turned to writer John Broome and artist Carmine Infantino, and the three loosely adapted/liberally borrowed ideas from the pulp hero Captain Future (Writer Edgar Ray Merritt is credited on the first page.), interestingly enough created by Superman editor Mort Weisinger. The result was Captain Comet, a science-fiction based hero who could be considered Superman 2.0 – he had psychic and telekinetic abilities in addition to super-strength, and though he couldn’t fly under his own power, his super-advanced mind allowed him to create a flight belt – notice that in the earliest Legion of Super-Heroes appearances, the Legionnaires wore those instead of flight rings. Brainiac 5 was a hack. 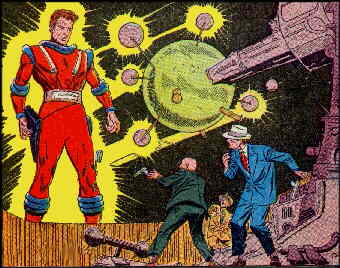 Though other heroes such as Namor and the original Human Torch’s sidekick Toro have been retconned as mutants – and in hindsight, of course they were – Captain Comet was actually the first comic book hero to be identified as one from the beginning. Born 100,000 years ahead of his natural time to a midwestern farming couple (shades of Superman), his birth was perhaps heralded by a comet in the sky. That would become important in the Bronze Age.

Blake was different as a child, demonstrating and then trying to hide his extraordinary abilities. It wasn’t until adulthood and assuming a relatively low-profile as a librarian that Adam Blake sought out physicist Professor Emery Zackro, who hypothesized Adam being an evolutionary flash-forward.

The Cometeer was built upon a prototype that Zackro had designed, and with a costume and a stun gun also designed by Zackro, they decided that Adam should become a full-time superhero, especially after hostile aliens arrived looking to do a little colonizing. For 38 issues of Strange Adventures, Captain Comet fought dinosaurs, artificial life forms, more aliens, and perhaps the human condition before (off-camera) deciding to find himself in space.

Along the way he had an impressive artistic pedigree. After two stories drawn by Infantino, the feature was taken over by Murphy Anderson, who would later become indelibly linked with Adam Strange. The last two Captain Comet stories in 1954 were drawn by Gil Kane, and then… it was over.

In July 1954, Captain Comet disappeared. Two years later Julius Schwartz hit upon the magic formula with the Flash, and the Silver Age was born. But for three years, Superman had a potential serious rival, and even the Martian Manhunter, who also has most of the same powers as Superman and more, didn’t appear until 1956. Captain Comet could have and should have launched a new boom and been the dawn of the Silver Age.

He was largely forgotten until returning to face the Secret Society of Super-Villains, and it only took him one issue to figure out who the good guys and bad guys were. But as he was ostensibly always on Earth-1, Captain Comet had largely operated in a time when he was the only superhero, though fans had forgotten him. He quickly became beloved, fighting the Society, appearing in a new solo adventure, and then… again he was felled by a line wide collapse, known as “the DC Implosion.”

In the 1980s, DC identified superpowers as coming from a “meta-gene,” their version of mutancy that had to be triggered, and so Adam Blake was retconned as having his powers actually triggered by that comet that appeared at his birth. Though that’s relatively minor; no matter what continuity he has appeared in, that original 1951 origin story remains untouched. True to a character who didn’t quite fit in any age, he remains unaltered by them all – except the New 52, and he was hardly the only character screwed up by that idea.

Later Jim Starlin would have Captain Comet assume the simpler identity of “Comet,” and operate solely out in space alongside Adam Strange, Hawkman, and Starlin’s the Weird. But as Comet he was gruffer, more like a P.I. than the decent all-American midwestern man from the 1950s who also just happened to be 100,000 years ahead of his time.

Many of his adventures were reprinted in Mysteries in Space: The Best of DC Science Fiction Comics, but it’s getting harder and harder to find at a decent price. Maybe it’s time for DC to give Captain Comet quality treatment and show a new generation of readers their lost superman, giving them a blast from the Atomic Age.

Fanboy Planet is affiliated with Amazon, and any purchases made through links on the site may generate revenue.