We have not even reached the 12th Day of Christmas, and already I stumbled across items that have me rethinking decor for the holidays in 2020. It’s not enough to have ornaments on the tree that proudly proclaim your fandom; they have to audibly proclaim them.

This past year, Hallmark released a Hogwarts Castle tree topper — which, no, does not sit on my tree, because it needs to be the centerpiece of a display all to its own, thank you. Not only does it light up and play music, it connects up with (so far) three character ornaments that synchronize in conversation and magic. Joining Harry, Ron, and Hermione in 2020 will be Albus Dumbledore and Hagrid, but you’re not here for the Wizarding World. You’re here for worlds upon worlds…

I cannot vouch for when exactly these products will be available. Hallmark usually does a Keepsake Ornament launch event across all their stores in July, with some ornaments released later in October. All are available with plenty of time to decorate your home.

First, Hallmark will be releasing this gorgeous Enterprise tree topper (retailing at $119.99). Though depending on its scale, you may prefer using it as a centerpiece on your coffee table, and find it difficult to put away outside of the yuletide season. 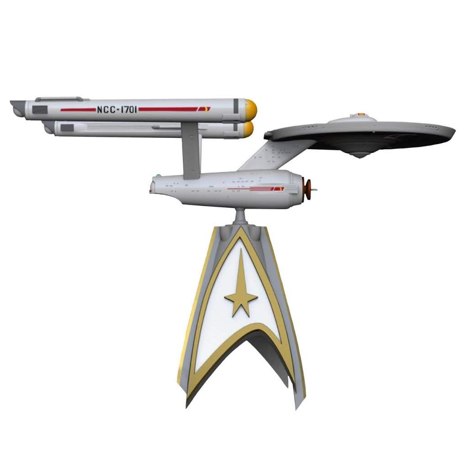 Though, really, I might be tempted to let it supersede the Death Star currently atop my tree. But I did mention that Hallmark makes these interactive — and so this tree topper will connect with three crew member figures, but not from the U.S.S. Enterprise. They will be Kirk, Sulu, and Uhura from the Terran Empire ship I.S.S. Enterprise, in character from the classic episode “Mirror, Mirror.” There’s no “Evil Spock” figure this year, but it’s hard to imagine that the most iconic image from that episode wouldn’t be released in time for 2021.

As with the Harry Potter ornaments, it’s a canny marketing move on Hallmark’s part — hook you one year and draw you back in for more the next. (I was already there.) Along with the bearded Spock could possibly be Walter Koenig’s Chekov.

No batteries will be necessary. Hallmark has a separate power cord that connects ornaments together (and helps with the syncing of sound). If history is a guide, the sculpts will be fairly good (the figures shown above might not be final product). Thus if you have not yet picked up Hallmark’s Star Trek ornaments, this will make a good place to start.

And 87 years later, you can say resistance is futile.