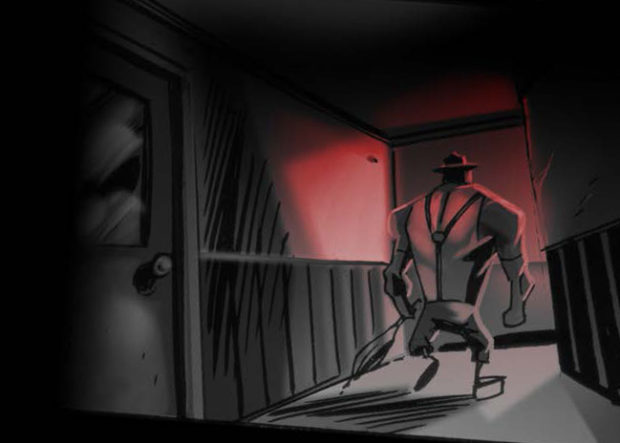 Being a private detective is hard enough. It’s even worse when you can pretty much only say two words. And if you know anything about Frankenstein’s monster, you know what those two words are. Still, Frank N. Stein walks the mean streets of Monstertown, doing what he can to mete out justice and earn a paycheck.

That’s the premise behind Dev Madan (DC’s Young Heroes In Love) and Keith Champagne’s Frank N. Stein, Private Eye, launching a Kickstarter campaign on (of course) Friday the 13th.  A 48-page one-shot with four short stories exposing different angles on life in Monstertown, it’s a showcase for some loopy monster humor and the range of Madan’s art. Champagne answered a few questions about Monstertown, as well as his new role in the comics industry.

Derek McCaw: Frankenstein’s Monster has had many incarnations in comics and pop culture. What drew you and Dev Madan to the idea?

Keith Champagne: The original idea for Frank N. Stein (the ‘N’ stands for Neil) was 100% Dev. He just called me up one day and was like, “hey, I’ve got this thing that I think would be fun…” and the project– along with this iteration of Frankie– grew and evolved out of that original conversation. It’s definitely not a version of the monster that we’ve seen before!

I think the monster is a character that everyone is familiar with but it’s a broad enough slate that there’s room for plenty of interpretation. Our Frankie is big and strong and monosyllabic but, just like his body is pieced together from different corpses, so is his soul. Brain of a detective. Heart of a poet. Fists of stone.

DM: What kind of background research have you done?

KC: Absolutely none! These stories are all placed in different genres and basically, I identify those elements of each individual genre that most resonate with me and then incorporate those bullet points into the story. Add a wry sense of humor, which is part of Frankie’s character, and a twist in every story and that’s the recipe we use to cook this stuff up.

DM: Frank N. Stein looks like a one-shot anthology of stories, but room for more. As you and Dev were developing this, what were your criteria for which stories would launch?

KC: Our most important criteria were which stories would be the most fun to produce and they’re assembled in the book in the order we completed them. You can chart the evolution of Frankie as a character along with way, see him find his voice, so to speak.

We’re definitely planning on doing more. I’ve written a story set on a space station where Frankie encounters Alien (the Giger monster) that also serves as a metaphor for the dissolution of a relationship. Frankie carries a lot of pain from the break up of his marriage to The Bride and that’s a common theme running beneath every story.

But yeah, fun. Fun is the key to all of this stuff. 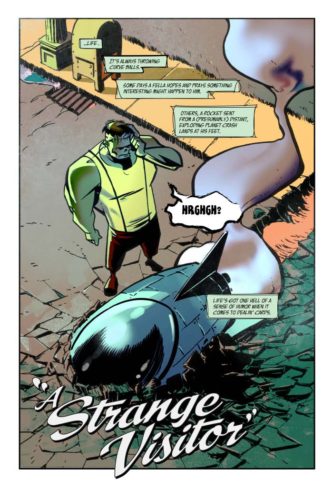 DM:You’re definitely having fun and using this to parody a few different things. Was there a take that was just a serious “the Monster as a hardboiled detective” and why did you NOT go with that?

KC: There probably will be a serious, “Monster as a hardboiled detective” story somewhere down the line – most likely in volume 2 – where everything is played completely straight and for real. My favorite thing about this character is that we can use him in almost any kind of setting.

DM: Since Frank is, at best, barely verbal, how do you dialogue him? What’s the secret to your gibberish?

KC: When Frankie was constructed, the one thing he didn’t get was vocal chords. His spoken vocabulary is limited to two words, ” fire,” and “bad.” And because he can say so little, the perception of him from the outside world is that he’s dumb. At the same time, though, he has these inner monologues running through his mind that are full of depth and soul and character. So don’t judge a book by its cover!

DM: The art style changes a bit from story to story. Is there a style you want to use for it and haven’t yet?

KC: Dev is responsible for the art on these stories from start to finish and I think he changes his approach based on genre. He finds a different look for each story depending on the needs of the script and it’s kind of awesome to watch him flex and play around the way he does. I think he’ll continue to adapt his style in the future to whatever works. I know for the stretch goal story we’re hoping to do, which I’ll ink and will be my first artistic contribution to this stuff, we’re going for a very 70’s comic book look which will be a lot of fun!

DM: You’ve worked with a variety of artists – when you develop an idea, does it come from goofing around on ideas with an artist, or does it come to you and you realize who the perfect artist is that will bring the vision to the next level? Or is it, “I want to do something with Dev Madan. We should come up with something?”

KC: Dev and I have been friends since we did Young Heroes In Love for DC back in the 90’s. He’s brought me in to work on some of his video game projects over the years and these stories were really just an excuse to keep working together in comic form. He’s THE perfect artist for this project, just like Tom Nguyen was perfect for The Switch, or Andy Smith is ideal for a project we’re doing called Barbaric. I like working with my friends and luckily, my friends can all make my scripts look really, really good! 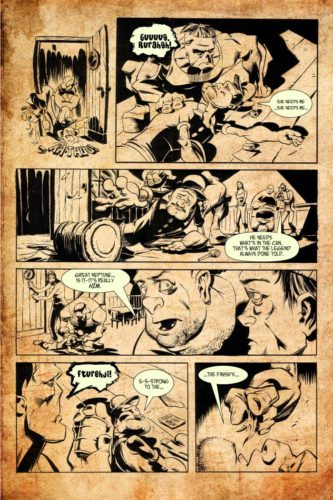 DM: What makes Kickstarter the right route to go, especially for creators who have been in the business as long as two you have?

KC: This is my second Kickstarter project. The Switch was the first and I learned a lot from doing it, both good and bad. The most important thing I learned was to get the project done before the campaign goes live so there won’t be any delays in production– which is what Dev and I have done while I was waiting for art on The Switch to be completed.

I think the appeal of Kickstarter remains the same for me: within 30 days, we’ll know if we have a ‘live’ project or not. There’s not months of waiting for focus groups at different publishers to decide if something is commercially viable or not. In 30 days, if enough people dig what we’re trying to do, we know if we’ve got a book or not. There’s a creative freedom to that aspect which is very appealing!

DM: You’ve also been named Editor-in-Chief for Space Goat. Why not make this a project through them?

KC: This project was already finished and the Kickstarter deep in motion before I signed on with Space Goat. Maybe next time but there’s so much cool stuff coming up there, they hardly need any projects from me.

DM: What can we expect from your tenure at Space Goat?

KC: The environment at Space Goat is very flexible right now as different licenses take shape. It’s too soon to say what one might expect except to say it’s going to be a lot of fun. When the time comes, let’s talk about this stuff some more!

Oh, we will. And here’s the link to the Kickstarter campaign.