Not a real surprise here for those who follow how, as Marvel TV head Jeph Loeb puts it, it’s all connected. Last month at Comic-Con, Marvel announced that Ghost Rider would be appearing on Agents of SHIELD this season. That came about because a few years ago, quietly, Sony gave up the rights to Ghost Rider because despite two movie attempts with Nicolas Cage, they couldn’t make it work. And the memory of the movie Johnny Blaze may run just a little too deep, so the Ghost Rider on ABC won’t be him; it will be Robbie Reyes, who drives a car from Hell, not a bike. But he’s still got the chains. Fans dig the flaming chains.

Which now brings up a semantics question, put to my attention by J. Dobbs Rosa: if he actually drives the car, how can he still be called Ghost Rider? People with a better grasp of modern slang than I, please enlighten me, because until today that didn’t bug me and now it’s going to keep me awake at night.

Anyway, with the character coming to television, it’s natural that he’s coming back to comics. So check it out in November — the previous series was fun, and its cancellation may have had less to do with sales figures and a lot more to do with big crossover events. Let’s hope Robbie Reyes does better with THIS Marvel Now!

Start your engines, True Believers – this one is going to be a scorcher! You heard right – Robbie Reyes is back! Hell on wheels comes to Marvel NOW! as the Spirit of Vengeance returns to comics in an all-new GHOST RIDER #1! Robbie Reyes co-creator Felipe Smith (All-New Ghost Rider) is back to pen the ongoing adventures of this high-octane hot-head, and he’s bringing artist Danilo Beyruth (Deadpool v Gambit) along for the ride!

Speaking with Marvel.com, Smith was quick to hint what we can expect from the new series, “More high-octane racing, pedal to the metal action, [and] some high caliber guest appearances that’ll broaden the scope of Robbie’s storyline as well as his outlook on life.”

A bizarre object has been discovered in Southern California and the mystery behind it has lead Amadeus Cho, the Totally Awesome Hulk, to Ghost Rider’s backyard! What chaos will be unleashed when this jade genius comes face-to-face with the ultimate speed demon? And what other guest star is around the corner?

Plus – don’t miss the debut of the newest speed trap in Ghost Rider’s life in a special 10-page bonus feature from original series creators Felipe Smith and Tradd Moore.

Strap in and buckle up, because Robbie Reyes is hitting the gas and speeding headlong into Marvel NOW!. Don’t get left in the dust when GHOST RIDER #1 comes to comic shops and digital devices this November! 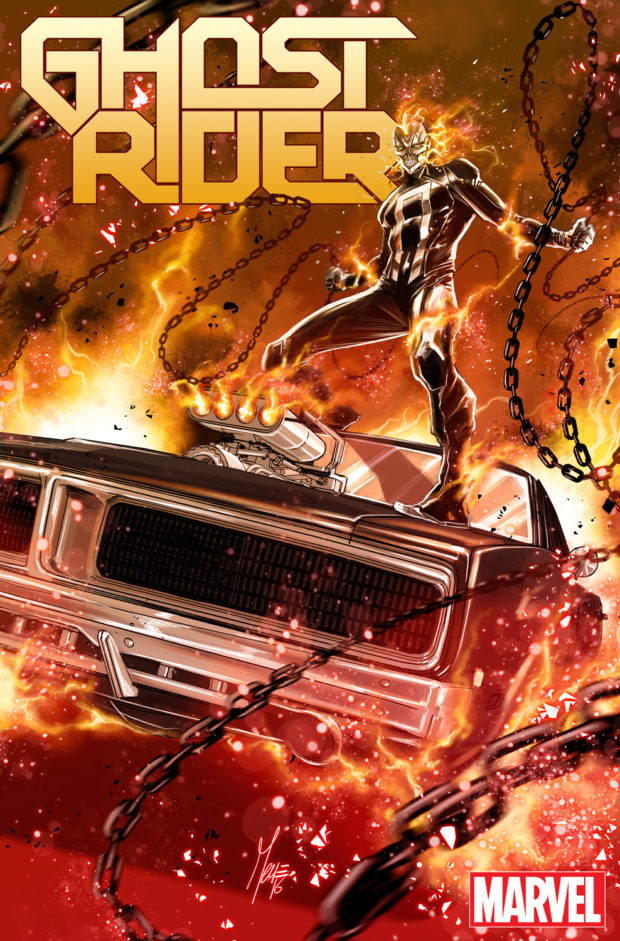