I got an email a couple of weeks before Comic-Con — would I be interested in talking to someone involved with the toys that Hasbro would have available as exclusives? As I’ve mentioned many times on the podcast, while I appreciate how cool Transformers (and G.I. Joe) are, they hit the zeitgeist at a time that I was out of toy collecting, so I admire them from a safe distance. But then Hasbro announced they were bringing back the Micronauts and that… well, that was my favorite toy line. So I was in. And I’m glad I was.

My contacts at the Hasbro booth were Derryl DePriest and Mark Weber. As members of the Global Brand Team, they work with designers to leverage the visibility of these cool toys, and yes, they’re involved with the Hasbroverse, which involves IDW Publishing and Paramount Pictures, to make sure that everybody knows who the Transformers are, and soon, who the Micronauts are.

Derryl is Vice-President of the team, and Mark is a manager of Global Brand Development, but don’t let those titles fool you. They’re just as much fanboys for these toys as we are.

Derek McCaw: Whose idea was it to bring back the Micronauts? They’re toys that got lost in time a bit.

Derryl DePriest: The interesting story is that originally Micronauts were created and owned by Takara in Japan. And a number of years ago, members of our senior team identified Micronauts — many of them who’d grown up playing with Micronauts and had a phenomenal experience with what Micronauts was — they decided that this is a brand that we would like to have in our stable. It’s complementary to all of the other owned brands that Hasbro has — Transformers, G.I. Joe, and some of our other boys’ brands. So they said, maybe we could talk to Takara-Tomy and buy this, acquire this brand.

So we went out and did this, and that’s going back eight or ten years that Hasbro has actually had Micronauts. Takara agreed, and we’ve formed an excellent partnership with Takara-Tomy. We actually acquired Micronauts, but it has been in a state of what we call development for a number of years. 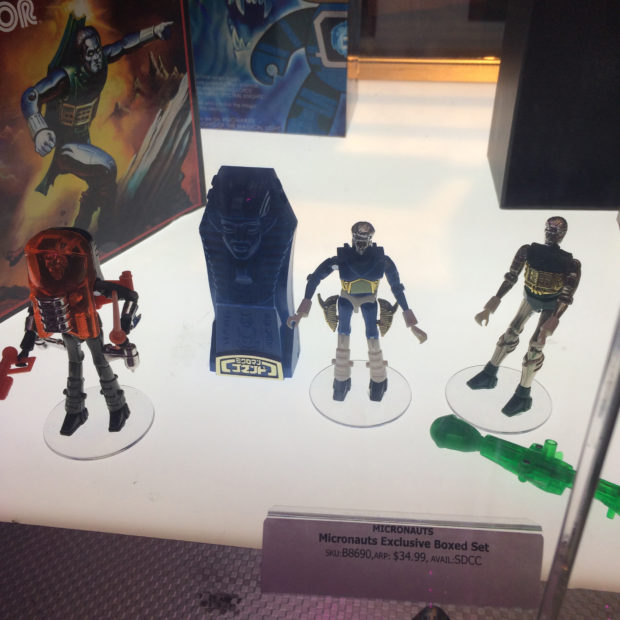 The goal is to relaunch Micronauts, being very true to the core — the original essence of the property that made it great in the first place. You know, that combinability, the interchangeability, the great characters from the original toy line that made it work, but to relaunch it. And Hasbro’s strategy is to build — with our Hasbro Studios — to build new entertainment venues. To launch properties and connect with kids and fans, and that could be with a movie, or a TV series.

Derryl DePriest: That’s the job of Hasbro Studios. I’m not talking about Micronauts in particular. I’m more talking about our strategy.

Derek McCaw: I thought I had a fantastic scoop here.

Derryl DePriest:  For example, Stretch Armstrong is another one of those legacy brands we’re working on, and now that is a series coming from Netflix very soon. I’m giving you an example of Hasbro strategy: create great entertainment that connects, and then launch the brand, grow the brand and flourish.  That’s why we’ve had Micronauts for years and haven’t activated it, because we’re putting the entertainment chips in place.

One of the most important recent developments for our Hasbro Universe of properties is our partnership with Paramount on what we call the Hasbro Cinematic Universe.

Derek McCaw: We’ve talked about it on the podcast, so yes, tell me more!

Derryl DePriest: That Hasbro Cinematic Universe consists of a focus on five core brands. The goal is to reintroduce these brands to today’s audience with great stories centered around great characters, and connect them together. Truly to achieve the whole is greater than the sum of its parts with crossover storytelling. Those brands are G.I. Joe, MASK — Mobile Armored Strike Kommand — Micronauts, Rom, and Visionaries.

Derek McCaw: Let me back that up. So it is separate from the Transformers? That’s been kind of confusing.

Derryl DePriest: They’re both set up at Paramount. But right now they are separate. I can’t really talk any more right now about why they are separate; that could change some day in the future. Right now our focus on these five brands is to reinvent them, stay true to the roots, but really create compelling storytelling.

Derek McCaw: Let me focus on the Micronauts as toys. What do you really have to do to update them? From behind the glass case, it looks like they’re pretty much the toys I remember from ’76 or ’77. What changes for 2016?

Mark Weber: The funniest bit is that to update it for what we’re doing right now… we didn’t. We actually reached out to Takara and said do you have any of the original tooling from 40 years ago? And they said probably not. We said please take a look.

On the first pass they didn’t find any; on the second pass they found three. So the toys you actually see in the case are from the original tooling from 40 years ago. That’s also part of the reason we reached out to Ken Kelly, the original artist from the Micronauts line, to create it. It’s brand new artwork, but it’s done in the style of the original Micronauts. 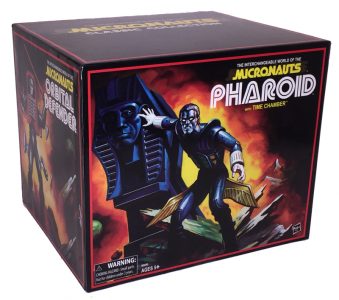 What we have here at Comic-Con is a very vintage collection. Call it a classic collection. Part of the answer is that we didn’t actually update this; we just embraced the vintage feel for Comic-Con.

Derek McCaw: But not to get nerdy about Micronauts, when you expand back out to include Oberon, Baron Karza, Andromeda, Force Commander… you’re going to have to retool, redesign those.

Derryl DePriest: Like Mark said, Takara only found a limited number of tools, so we can’t actually do any more of than what we’re showing here. I think there’s maybe one vehicle, I’m not really sure which one it was; I don’t think it was one of the main ones like Battle Cruiser. This is pretty much the extent of what we have for vintage Micronauts.

Going forward, things are going to be based on the new interpretations that we’re creating. But again, like I say, we want to be very true to the original elements of the original toys. What we call the foundational property elements, but update them with new stories for today.

Mark Weber: There’s a really good example if you just look at what IDW is doing with our comic book, which is a totally updated look of classic themes and characters. 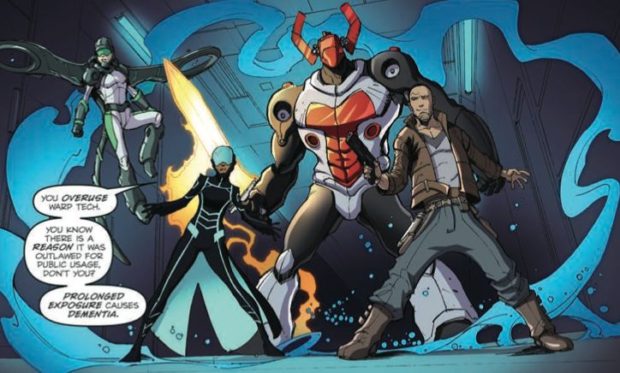 Derek McCaw: Before I started recording, Derryl and I were talking about that — going back to the ’70s for Micronauts and Rom, and to some extent G.I. Joe and Transformers, the comics were so crucial to getting people interested. Did you play with them or read the comics? The comics for Micronauts were some of the best comics that kids today will never get to see because they’re tied up with someone — Marvel’s lawyers? So how closely are you working with IDW to coordinate across the media? Has IDW been given a story bible and told “we’d like you to develop along these lines”? So what we read in those comics would be close to — because comics and movies are different — close to what we’ll see on the screen?

Derryl DePriest: That’s the goal. The goal is to achieve continuity in all of our screens or in print. And it doesn’t always work out. For instance, comics work at a very different pace than movies. Movies happen once every couple of years; comics, though, are rolling out monthly stories. Things evolve and new stories need to be created within there. What we want to do is let our partners tell great stories.

We want to make sure that we’re keeping track and curating that continuity, so we’re not contradicting anything. We’re building on that foundation and letting our partners keep adding to that, but also letting them experiment with things that work well, too. IDW was really first of the modern storytelling for Micronauts right out of the gate. (Editor’s note: Devil’s Due Publishing did do a short-lived series over a decade ago, and there were novels that went along with that.) We worked with them very closely. They run all the stories by us for approval and for input. We make tweaks here or there, but otherwise it’s a phenomenal collaboration. IDW is a great company.

In addition to the Micronauts comic they’re launching right now, they are doing that first kind of epic crossover with all the characters.

Derryl DePriest: Revolution. What’s different than what’s in the world of cinema, in the cinematic universe, is that IDW has more latitude. They’re actually crossing over Transformers into that universe, and Action Man, which is another one of our legacy brands. We’re super-excited about this new crossover universe that IDW is creating as well in comics.

Derek McCaw: Who was your favorite Micronaut as a kid?

Mark Weber: Everybody likes Acroyear, right? That’s like saying “I like Snake Eyes.” Or Grimlock, or Optimus.

Derek McCaw: That’s true. Snake Eyes was the only G.I. Joe I ever bought.

Mark Weber: It’s kind of a lame answer to say that I liked the main guy, but…

Mark Weber: I like Acroyear. And I think everybody likes Karza, on some level.

Derek McCaw: Do you still have your original toys?

Mark Weber: Some of them, but I played with them hard. A lot of them are ruined.

Derryl DePriest: I wish I had my original toys. The sad thing is I don’t. I think that I sold them, probably when I was a teenager. 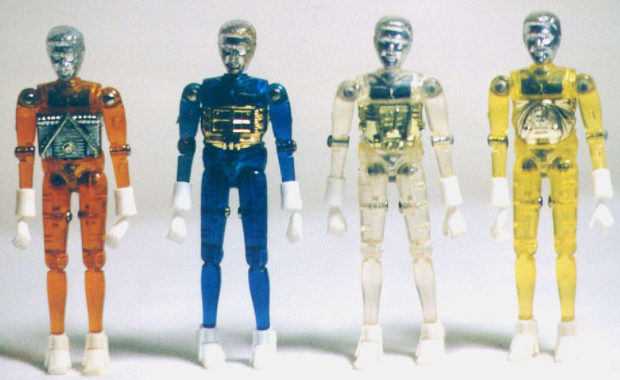 Derryl DePriest: I didn’t know. I loved them all, but I really liked the vehicle part of Transformers. It was very different. If you even talk about the historical importance of Micronauts as a brand, as an innovative concept from Takara, the 3 3/4″ vehicle concept, they pioneered that. Which was later an influence for Star Wars and G.I. Joe. the Real American Hero. That’s the scale that did the job, and vehicles are such an important part of Micronauts, and proved to be such an important part of Star Wars as well.

Derek McCaw: Is there any connection with you guys back to Mego, who originally brought them over to America?

Derek McCaw: When are we going to see them in stores?

Derryl DePriest: That’s something that we haven’t announced yet. I would say, for fans, that probably the announcements will come from Paramount as part of the Cinematic Universe. We’ll figure it out as we go. But hopefully before too long, we’ll have a vision of what’s happening with the Cinematic Universe, in terms of what’s going to come out first and which properties are going to lead. So I’d say stay tuned!

Derek McCaw: Looking forward to it. Thanks, guys!