While most movie fans and fan boys are beyond anticipating the behemoth that is Avengers : Infinity War dropping in a little more than a week, most have forgotten about the sheer number of blockbusters being dropped this summer.

One of those films is the follow up to Jurassic World (2015), Jurassic World : Fallen Kingdom. While the film’s release is not until June, anticipation for this film has been growing, albeit under the radar.

The biggest change for the sequel is in the directors chair with J.A. (A Monster Calls) taking over for Colin Treverrow, who initially was to busy directing Star Wars : Episode 9, returning in a writing/producing capacity. While the premise of the film seems to be pretty basic, and seems to somewhat mirror the initial sequel to Jurassic Park, The Lost World where the dinosaurs have left the island of Isla Nubar, and have come to the mainland.

Chris Pratt returns along with Bryce Dallas Howard as the leads. What is undoubtedly one of the most anticipated parts of the film is the return of Jeff Goldblum as franchise favorite Ian Malcolm. While the initial Jurassic World beat The Avengers: Age of Ultron at the box office, and resulted in a hilarious tweet from Marvel studios at the time, it is highly unlikely the sequel will beat Infinity War. Still, it will undoubtedly continue to be big business for Universal. 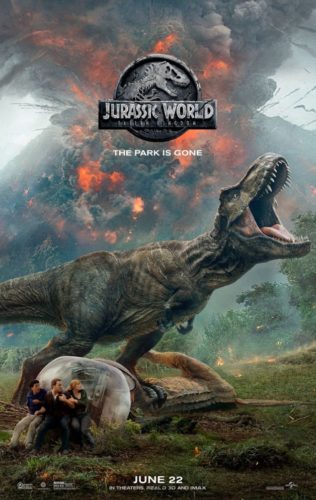