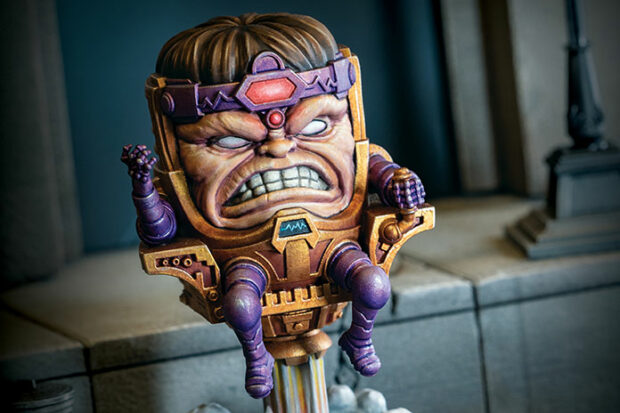 It’s tough to get ahead when you’re basically just a head, but it helps to have family… or does it? The newly rebranded Marvel TV Studios and Hulu will be exploring that with their upcoming animated series M.O.D.O.K., produced by and starring Patton Oswalt as the title supervillain.

Oswalt plays the constantly foiled Mental Organism Designed Only for Killing in this series, following the extremely dysfunctional home life of the ex-A.I.M. member pursuing his dream of one day conquering the world.

But after years of setbacks and failures fighting the Earth’s mightiest heroes, M.O.D.O.K. has run his evil organization A.I.M. into the ground. Ousted as A.I.M.’s leader, while also dealing with his crumbling marriage and family life, the Mental Organism Designed Only for Killing is set to confront his greatest challenge yet: a midlife crisis.

Garcia will play Jodie, M.O.D.O.K.’s wife pursuing her mommy-blog turned lifestyle-brand empire and discovering who she is as an independent woman in her forties.

Fumero will portray Melissa, M.O.D.O.K.’s 17-year-old daughter and queen bee of her school along with being a star in the world of teen figure skating.

McLendon-Covey is Monica Rappaccini, a brilliant mad-scientist at A.I.M. and M.O.D.O.K.’s rival at work. Clearly more competent and qualified, Monica believes she should be running the organization.

Daly plays Super Adaptoid, a snarky android with ambitions to live, feel and create, but is instead forced to spend his days massaging the hoverchair sores on his creator M.O.D.O.K.’s scalp.

Richardson is Gary, a henchman at A.I.M. who is fiercely loyal to his boss M.O.D.O.K., even if M.O.D.O.K. struggles to remember his name.

M.O.D.O.K. is slated to premiere later this year.