We picked up by finishing up the overall scheme for the Avengers line, where it had been rumored that Bendis was overseeing all the other books that might tie in. He quashed that in Part 2, but we still had not spoken of a brand new, at this point fairly mysterious, title coming from the House of Ideas…

Fanboy Planet: What about the Young Avengers? What kind of coordination do you have over that?

Brian Michael Bendis: There are editors on these books who actually do all of this. I am just a fan and eager cheerleader. Tom Brevoort and Andy Schmidt do all of this work. All of it. Allen Heinberg, who is the guy from The O.C. who writes all those episodes with those rather outstanding comic book references beyond the typical references, just kept writing stuff about us in his shows. I didn’t know him at all, but he kept writing really nice things. It was very, very nice.

It just became obvious that this guy, who wrote my wife’s favorite episode of Sex and the City, was just a really good writer. Marvel came to him and said, “Hey, you want to do something?” And he came up with a really great idea for a book. It was just one of those ideas where everyone in comics who hears it says, “oh, f*** you!” Because it’s one of those ideas you’d kill for. He seemingly pulled it out of his ass. It seems to have come rather easily, whereas it would have taken me three years to come up with it.

FBP: So in exchange are you going to angle for a guest-shot on The O.C.?

Bendis: No, I believe I may be too old. (After the interview, I discovered that there is a teacher on the show named “Mr. Bendis.” I don’t watch it. Sue me.)  He’s an outstanding writer. And also, he’s got such a good artist. People saw it online, they put out this Avengers Finale preview, and one of the pieces was Cheung – phawwww – this guy is great.

Me and Heinberg talk. I’ve shown him what I’m doing, and he shows me what he’s doing. They complement each other naturally. They build off each other. But just like any other comics, you can buy them on their own, or buy them together, or whatever.

FBP: So you’re aware, but not coordinating.

Bendis: We’re very aware of each other, but no one is stepping on each other’s toes. He even asked me to use Jessica Jones for something. She’ll be making a rare out of Bendis appearance.

FBP: Yeah, who else do you hate that you’re going to make into something cool?

The oldest lesson in entertainment to learn is to never say never. And I’ve done it four times already.

FBP: How much hate mail have you had over Gwen’s death?

Bendis: You’d be surprised how little actual hate mail…emotional mail, sure. You’ve got to remember that when people go online, that and the way they act in real life are two totally different things.

We’ve gotten a lot of very emotional e-mail. Even the hate stuff is kind of a compliment, because this Gwen Stacey was totally a creation of Bagley and myself. That people gave a s*** is amazing. Really, it’s amazing that anybody cares about any damned thing we’re doing. The outpouring of emotion towards it is what you’d hope to get from it.

The one criticism is that it was too early, and well, yes, that’s what a tragedy is.

FBP: So why Gwen and not Mary Jane?

Bendis: You know, you’re just going to have to see for yourself in the book. It complicates his relationship with Mary Jane in such a spectacular way that it will be pretty obvious in a few issues. Once issue #65 came out, that seemed to relieve a lot of people. They were looking for something in there; they wanted us to just tell them we weren’t going to throw it away.

FBP: You’re just trying to tell the best story you can. It was stunning. But that just means you’ve done your job. Can I kiss your ass more?

Bendis: YES! Listen, anyone who’s read the books knows that clearly, we loved Gwen Stacy. It’s hard to describe how I didn’t want to do it either. But sometimes, the story tells itself in a way.

FBP: I want to keep myself surprised by Powers, but we should probably still talk a little bit about it. You’ve had a huge boost in Powers sales from the first Marvel issue. Has that kept up?

Bendis: Oh, yeah, we’re way over what we were – than we ever were. There’s always a boost from number one, but then we settled and numbers two and three sold out at a level higher than we ever had. We’re good to go.

FBP: Will you be returning to quotes on the cover, he asked, trolling for the opportunity to be mentioned on the cover of a Marvel comic?

Bendis: I stopped for a while, but we’ll do it again. Most of the quotes we’d had for the year before we switched were, “Monkey f***ing? What the f***?” and I didn’t think that was a good enough quote for later issues. 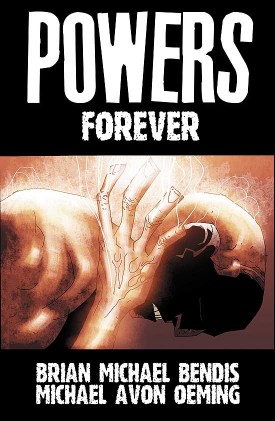 FBP: It sure keeps it out of the hands of the kids…

But now we’re getting good reviews again. As hysterical as everyone has been about Avengers is how nice everyone’s been about Powers. And I can’t thank people enough.  With Powers #5, everybody’s going to be pulling their hair out again and throwing things at me. It’s my career best cliffhanger. When I saw the final colored art on it, even I got all “oooooOOOOh!”

FBP: How do I spell that?

FBP: Are you going to sneak the Beyonder into Secret War?

Bendis: I would say never, but then what did I just say before?

Actually, the Beyonder will be showing up in the What If – ? humor issue, which I’m very excited about. We’ve been working on this all week, and we’re having such a good time. It’s “What if Identity Crisis happened at Marvel?” We went to Brad Meltzer, and he approved it conceptually.

It’s a special double-sized issue coming out in December. Millar is in it, Brubaker is in it, and Stan Lee is returning to Marvel. He wrote tons of great stuff. We’ve got a lot of goodies. “What if Thor was Jewish?” (Marvel actually has this book listed for December 29 as Wha — Huh?)

FBP: After an article in Wizard last month, the rumor has sprung up that Joe Quesada wants you to do a Moon Knight book. Is that true?

FBP: You’re not sleeping anyway, so why not?

FBP: We lay that one to rest, then…

FBP: Is there a character that has not done well that you would like to bring into fan love?

Bendis: I’d certainly say that some of those are in New Avengers. I love Jessica Drew. She’s got to be in my top ten favorite characters. And The Sentry would be that, too. I’m still on my journey with Cage.

FBP: I noticed that in the Halloween issue of Fantastic Four, kids are still dressing up in the old Luke Cage costume. Are you going to address that?

Bendis: All this stuff is all great jokes in New Avengers.

There’s still more…as Bendis goes Hollywood and reflects upon life, the universe and…