In Part 1, Bendis discussed Daredevil. Part 2, Avengers. Part 3, a smattering of his other work coming from Marvel.

Here, though, is the answer to the question “what are you doing to make a sequel to Fortune and Glory?” and a discussion of Batman, Daredevil and what a Metamorpho needs.

FBP: How about Hollywood? Has Charlize Theron’s injury on Aeon Flux messed up your schedule for Jinx?

FBP: Last year at Comic-Con, you said you were trying to take an Alan Moore approach, just letting your comics speak for themselves and not getting worked up over their film adaptations, but now here you are writing Jinx…

Bendis: No, no. I actually said I wished I could. I certainly see that there’s a benefit to it, just wash your hands and say, “whatever.” But on the other hand, I love movies and I love screenwriting. You get these opportunities, and for comic book writers, it’s an opportunity to skip to the head of the line and write big movies. Whether you get fired off them or not is another thing.

You’ve got the property, and if they want the property you can say, “well, I’m writing it or f*** you.” Ninety percent of the time that works.

As I’ve detailed in cartoon form, there are many situations that have not been the right circumstance. And then there are things that kind of feel good at the start. This is one of those things, where it feels like it might happen. We’ll see. Hopefully, it will.

FBP: Do you have producer status on this?

Bendis: I’ve got something. I don’t actually remember what I have. My name is all over it.

FBP: You’ve mentioned that Fortune and Glory has been optioned. Isn’t that kind of redundant?

Bendis: There’s no option right now. There’s someone that’s interested in it that I’m interested in working with, and if I find the time, we’ll do so. But I never like announcing stuff until the deal is really in place. 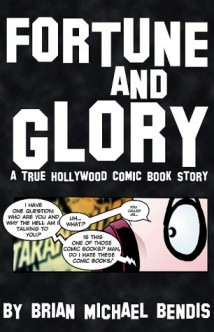 Bendis: It just floats there. We just got another re-option. It hasn’t moved forward, but it hasn’t moved backward. But we got a re-option, so that’s good. It’s better than a kick in the ass.

FBP: Has there been any movement – flowers, candy sent – over the Batman/Daredevil crossover?

Bendis: Nah. (both of us laugh) THAT did not work. I completely misread the animosity towards Marvel that they (DC) had.  I blew it. I flat out have to say that I blew it. That’s why I apologized right afterwards. I’m not a wrestling dude, and it turned into one of those wrestling situations. It was my fault, too. It just happened out of my control. I should have stopped it immediately, but even as it happened I was intrigued by the fact that it was happening.

“Wow! This is happening!” And I was in the middle of it, and could not stop it, because I was just too curious that it was happening. But as I said in my apology letter to everyone, there were words coming out of my mouth that I wish that I could have grabbed out of the air and put back in.

I would love to do it. I’m hoping that they’ll look to see how well the JLA/Avengers hardback did and they would call each other up and start talking. But it doesn’t look like that’s ever going to happen. Too bad. I’ve got much respect for everyone involved. I hope they can start respecting each other.

FBP: Let’s say a miracle happened, and you did start writing for DC, but they told you you had to write Metamorpho, what would you do?

I’ll work for DC one day. I love DC comics. I love the characters. There’s all kinds of cool stuff. It’s just that I’m a Marvel kid. I grew up as a Marvel kid, and I’ve got a lot of Marvel stories rolling around in my head. The freedom given to me right now is just amazing. And also, I’m a big believer in loyalty. Joe picked me out of the ether and gave me a shot. He put me on Daredevil off of Torso, and Torso sold 2,000 copies. You know? I’m a big believer that you stick with your guys. You know what I mean?

There’s a lot of Johnny-come-latelies that have come at me with tons of money, with really awesome job offers…

FBP: You were going to write Sigil, weren’t you?

FBP: They might be alive today if they had called you.

Bendis: No, I think then we’d both be working at McDonald’s.

FBP: Okay, years ago you got crap for recommending Josie and the Pussycats. What embarrassing movie recommendation do you have this week?

Bendis: Oh, I’m apologizing…I got more s*** for that than I did for Hawkeye. I think I actually lost readers over that. “I thought you were cool…” CLICK.

I used to be a connoisseur of s***ty movies. It was my hobby. But now I’ve kind of been avoiding a lot of the utter s***. It’s just because I have a kid now, and you kind of lose the oomph to sit through s*** on purpose. Charlie’s Angels, the first one, I was right there. The first day. I can’t wait to see this piece of s***. I love pieces of s***. But Charlie’s Angels 2, eh, it’s out on video.

The old me, I would have been right there. How do you say to your little girl, “sorry, sweetheart, I could watch you grow up, but I have to watch Cameron Diaz’ ass do hammer time.” 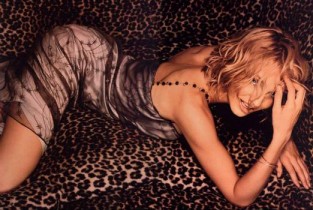 FBP: Do you feel that your subject matter might change as your daughter gets older? You might want to write something more appropriate for her?

Bendis: There is a very funny moment coming in about twenty years. My daughter, on her own, I will never force her to read any of my stuff, but one day she will want to read it. She’ll grab an Alias and Powers trade and go to a coffee shop or something. Then she’ll go, “ewww! You’re gross, Dad.” That’s going to be a fun day.

If anything, my daughter’s existence has made me even more not want to suck, because I know she’s going to read it. On top of everyone else who buys my stuff who I don’t want to suck for, her existence is a constant reminder of “don’t drop it.” When you have kids, some of your emotions are much more right there. I can write that. In the recent Pulse, people saw Jessica’s hysteria over maybe losing the kid, they can see that that’s what the whole nine months are like.

FBP: I was relieved she didn’t lose the baby.

Bendis: That’s the cliché. What isn’t the cliché, but what everyone feels, is that overwhelming hope you don’t lose this, but it’s totally out of your control. If anything, a situation in a Marvel comic can over exaggerate a situation like this. I’m writing the Green Goblin smacking Jessica around, and certainly no one’s ever felt that, but they can feel the die-hard emotion of it.

Thank God I have an outlet.

We spoke a little further of cabbages and kings and Catholic girls, and I promised Bendis a burger at WonderCon 2005, where he will be making his first appearance at that long-standing convention. But at the rate we pin each other down, it may more likely be WonderCon 2008.