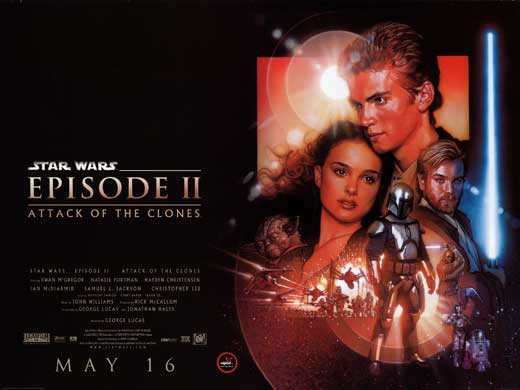 It has been a dark time for the republic of fandom. The Trade Federation/Marketing Division, wielding an army of 5,000,000 unsold Jar Jar Binks action figures, claims to have gone into hiding. Suspiciously enough, signs of their activity remain everywhere, even on bags of Doritos. Battered and bruised from their last skirmish with the forces of Lucasfilm, those who believe that they keep the true flame of The Force shamble toward their nearest multiplex, a mixture of anticipation and fear on their faces…

Thankfully, a light does shine in the darkness, even as Star Wars itself takes a dark turn. Breathe easy; Attack of the Clones returns to some of the sweep and fun that caught us all up in the first place. Unfortunately, it’s still not a great movie; as enjoyable as it is at times, it makes you wish that George Lucas had reached a little further in something other than technical excellence.

At no time does Attack of the Clones look anything less than amazing. From the signature opening shot (and yet still varied from film to film) to a bloody arena of death on a foreboding planet, the visionary Lucas does his job: he shows us things we’ve never seen before, even when we think we have.

Somehow, in Lucas’ hands we can completely accept an Italian villa as a hidden retreat on Naboo. Everything just has an extra luster of imagination. And just as in The Phantom Menace, we get a real sense of the sheer scope of a galactic republic. Some complain that it’s too busy, but really, it should be.

Perhaps what shouldn’t be quite so busy is the plot. Once again Lucas (with co-writer Jonathan Hales) has written a lot of the action off-screen. We can accept that ten years have passed in-between films, and that we’ve missed much of Anakin’s (Hayden Christensen) training as a Jedi Paduwan. But in that time, too, the Trade Federation has gone on doing whatever it is that it’s doing, and a new villain has arisen: Count Dooku (Christopher Lee). Dooku has managed to form a separatist movement, which has everyone very worried politically (and way too many scenes get devoted to characters worrying politically). As the film opens, Senator (formerly Queen) Padme Amidala (Natalie Portman) is heading to Coruscant for a very important vote over whether or not to form an army to fight the…zzzzzzzz.

Though it does open with an explosion, we have to wade through too much political claptrap and awkward re-introduction of all the characters before the action can really begin. It’s so much easier when it’s just “…the Empire has found the rebel base again” Thankfully, the early scenes on Coruscant get livened up by a strangely familiar bounty hunter (Temuera Morrison), orchestrating assassination attempts on everybody’s favorite mother of Leia.

This leads into one of the movie’s great sequences, in which Lucas tops his famed cantina scene with an intergalactic diner. But that comes after a giddy chase through the air traffic of Coruscant. It’s exciting, though a little too obviously the blueprint for an Xbox game. 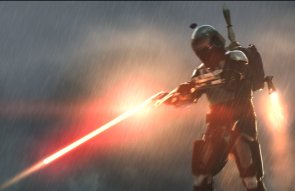 The film moves in fits and starts, clipping along nicely until the next time the characters have to play catch up along with the audience. Everybody is reactive, rather than proactive, figuring out the consequences of actions committed long before. Even the titular clone army is something just stumbled across accidentally. Lucas covers it up with action, so you may not notice as you watch it that the plot moves the characters instead of vice versa.

When the characters are worth watching, it works. Ewan McGregor discards his sedate ways from The Phantom Menace, and plays an Obi-Wan both proud and exasperated by his Paduwan. Perhaps he was forced into the teaching role too soon, but allowing for some emotion in Obi-Wan allows for Mace Windu (Samuel L. Jackson) to still look cool while remaining in complete control of himself. (And oh, yes, that makes Mace that much more menacing in a climactic Jedi free-for-all.)

Even fully digital, Yoda (Frank Oz) still has it. Being computer generated simply allows for him to cut loose. Which he does. At first it’s funny, but within seconds, you will believe Yoda is truly a Jedi Master. If you believe in such things as Jedi Masters, anyway. Clearly, he’s the only one who can truly stand against Christopher Lee, playing a better-groomed version of Saruman, but playing it well. 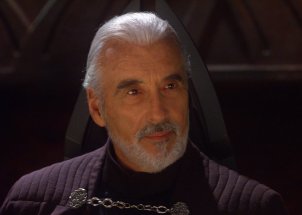 For those who believe Boba Fett got out of the Sarlacc Pit, or just wish he had, the plot involving his father Jango will be immensely satisfying. At last we get to see all the gadgets in his armor used to kick butt. But it does leave a weird taste: does every character need to have some relation to one in the original trilogy? It feels inevitable that Han Solo will show up in the third film, but if Lando ends up being the son of Mace Windu, I’m outta here.

A huge hole lies at the center of the movie, though, and that’s the romance between Anakin and Padme. Portman has proven herself a fine actress over and over, and does what she can with the material. But the two don’t have a romance, they have a melodrama, with the only attraction being bluntly scripted.

As Anakin, Christensen whines, pouts, and otherwise behaves like a complete jerk. Though assigned to protect Padme, he acts more like a stalker, bullying her into loving him. It’s not entirely Christensen’s fault; he’s just working from the script. But we are supposed to believe that Padme falls in love with him despite his spouting fascist philosophy with a winsome grin. She comforts him after he commits a near-genocidal act; sure, he’s obviously on the path to psychopathy, but he looks like Bambi. Actually, considering my own high school experiences, this may be pretty believable after all.

Okay, scratch that complaint. But still, it’s not a tragedy that this mewling would-be Mussolini becomes Darth Vader. It’s an inevitability.

Some of the film may echo too strongly of The Empire Strikes Back. To explain how would be to ruin a couple of plot points, obvious though they may be. But you can bet that Lucas strove mightily to give fans what he thought they wanted.

You will also notice that almost every ancillary character has a rather flat delivery. I’m putting out the theory now that despite the mystical mythological party line being spouted by the major magazines, at heart this is all still a very long Saturday Afternoon serial, and Lucas can’t shake it. He has claimed in Entertainment Weekly that they’re using an older film acting style, but, George, a lot of those actors were flat because they were actually bad, not stylized.

At any rate, it is important to remember that the roots of Star Wars don’t really lie in world legends, but in lurid sci-fi pulp fiction. (The deeper we get into Darth Sidious’ plans, the more the Empire starts to look like Isaac Asimov’s Foundation series.) And when you look at it that way, it looks even better. This isn’t brilliant filmmaking, but it does make a fun movie.

And there’s no shame in that, is there?