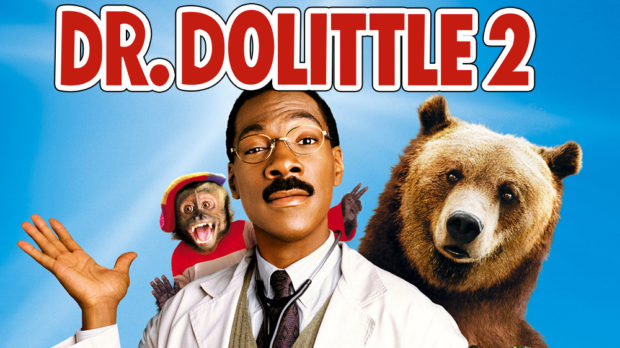 Something amazing happened. A really terrible (but moderately successful) summer film spawned a sequel. Okay, in and of itself, that’s not so amazing. Instead, marvel that Dr. Dolittle 2 is not only that rare sequel better than the original (in this case, not hard), but it’s also entertaining in its own right. Norm McDonald plays a major role and the movie still doesn’t suck.

When last we left the good doctor (Eddie Murphy), he had come to grips with his mutant ability to talk to the animals, and accepted an invitation to teach at the mysterious Xavier Institute For Gifted Children. Well, he should have. Instead, he combined his thriving medical practice with a newfound veterinary skill. Three years later and it seems to have worked out just fine. Oldest daughter Charisse (Raven-Symone) chafes at living with animals traipsing around her life, and Dolittle doesn’t know what to do. 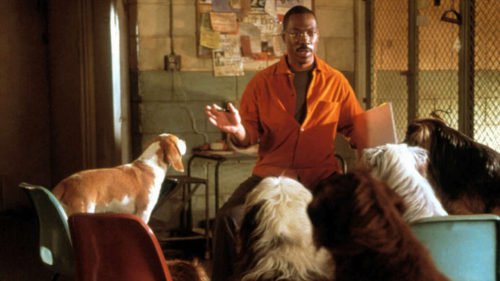 After rats ruin Charisse’s birthday cake, her father tries to make it up with a trip to Europe. The local wildlife mafia, however, have other plans. Sending Possum (Isaac Hayes) and Joey the Raccoon (Michael Rapaport) as emissaries, they “persuade” Dr. Dolittle to check out a logging site that threatens their homes. Thankfully, Dolittle’s wife Lisa (Kristen Wilson) practices law, and together they figure out a way to halt the logging company. If Dr. Dolittle can teach circus bear Archie (Steve Zahn) to survive in the wild and mate with Ava (Lisa Kudrow), their species will continue, and no logging can be done in the area. (It makes sense when they tell it.)

The trip to Europe cancelled, the entire Dolittle clan and their dog Lucky (McDonald), who narrates the whole adventure, head to the woods, and the training begins. Unfortunately for them, you can take Archie out of showbiz, but you can’t take showbiz out of Archie. In Ava’s words, he’s a dork. And unless he snaps out of it and stops singing Gloria Gaynor tunes, Ava and Archie will never get together.

While it isn’t Shakespeare, DR.2 does hew more to the spirit of the original Hugh Lofting stories than the first one. (And who’s to say that Eddie Murphy’s character isn’t a descendant of the original?) In the first film, Dolittle’s family dynamics took center stage, and it played out mawkishly. The animals were no more than a “cute” gimmick, and the film suffered for it. Here writer Larry Levin and director Steve Carr wisely shift the emphasis to the animals themselves. The family storyline here still seems a little stiff, but it those scenes never last long enough to get boring. From a structural standpoint, it’s also great to see a movie that actually has a third act. It moves well, it ends well, and it leaves you not afraid to see another installment. Some of the jokes lie a little on the cheap side, with a lot of toilet humor, but it works because this is, after all, a film with talking animals.

Many of the animals are cast perfectly. Isaac Hayes makes a better possum than anyone might have imagined, and Zahn clearly has a blast playing a has-been on the fringe of the entertainment industry. Andy Dick makes a cameo as a weasel, and never has there been a more fitting pairing of man and animal. They might just as well have put Dick in a weasel suit; it’s that eerie. If you listen closely, too, you’ll catch many Mr. Show regulars. 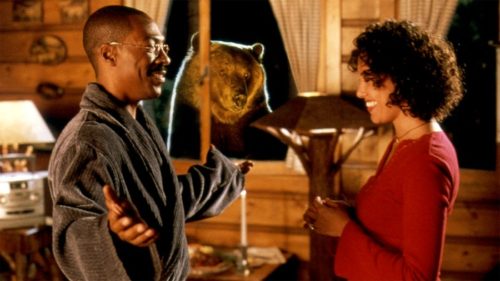 Still, Murphy owns this film. While a little jarring to see a former hip, edgy comedian play a father figure, it works. He comes across as a caring father figure. In his dealings with the animals, the script allows him to snap into his edgier persona, and flashes of the old fast-talking Eddie emerge. Thank heavens he can still remind us that Chris Tucker works in territory Murphy staked and left years ago.

The rest of the humans do not fare quite as well. This time around the younger Dolittle daughter (Kyla Pratt) has almost nothing to do. Symone takes the focus, but doesn’t get to do much more than whine. Basically, the Dolittle family has been appearing in one form or another on network television for years, and the film has nothing new to offer on that score. Kevin Pollak and Jeffrey Jones appear as the villains of the piece, and as such do a decent job mugging evilly when required. In too brief a role, Andy Richter pops up as a hapless zookeeper, funnier than expected and marking him as a character actor to watch.

Fox and Murphy may have hit upon a new franchise, if they want it. Kids have got to love this stuff. Adults won’t feel cheated if they stumble into it. And there is still that eerie Andy Dick/weasel thing.