In the opening sequence, Atlantis proves that its intended audience is older than the average for animated Disney fare. It is completely subtitled, indicating that unless you can read with a certain amount of speed, accuracy, and comprehension, wait for the release of Cats and Dogs.

Atlantis (the city, not the film) sinks mysteriously during the first fast-paced minutes. A menacing blue tractor beam pulls the Queen of Atlantis from the city as it sinks. The abduction teaches the first rule of parenting in a movie, namely if one is ever separated from one’s offspring, always take or bestow a piece of jewelry for later identification and heartrending. Following this breathless opening the action slows for a little plot.

Michael J. Fox voices Milo Thatch, the scientist/hero with the booksmarts to find the long-lost empire. Derided by his elders, Milo toils away at his research in a boiler room trying to prove that his late grandfather’s lifelong pursuit of the sunken continent wasn’t in vain. Strangely, Milo’s memories of his grandfather play out in a scratched, sepia-toned kinescope of the two of them posing for a portrait. If one carries that disturbing conceit out to its logical end, a Gen-Xer’s childhood memories are all Super-8 footage and even worse, a kid growing up today will look back to the year 2001 through the lens of a shaky digital camera.

Milo’s research is once again rejected but waiting at home for him is Helga (Claudia Christian), possibly the hottest chick ever to slink out of a Disney animator’s pen. Looking like Aeon Flux after a bleach job and a sandwich, she invites the stuttering bookworm to the home of the obligatory eccentric rich guy who will validate and fund all of Milo’s research. From this scene on the picture takes a turn into classic Disney adventure, most notably 20,000 Leagues Under the Sea.

At a pace that leaves the audience’s heads spinning as fast as Milo’s, the research team checks in and the adventure begins. The animation styles vary greatly from character to character. Although it is comforting to see that warm, classic 2-D cel animation has not crumbled under the soulless computer generated creations of late, the overall character design lacks consistency.

Milo is drawn like a classic Disney character, somewhere between the male owner in 101 Dalmatians and an animated Dick Van Dyke. Then the smoldering Helga and the hulking Michael Clarke Duncanesque doctor (Phil Morris) are rendered with a level of naturalism and style heretofore unseen in Disney humans. Some of the characters sport drastic angles while others stride from the pages of classic adventure comics with rounded, yet rugged features. The gas-masked thugs, reminiscent of Ralph Bakshi’s Wizards, bring a level of menace and brutality that raises the stakes higher than any animated Disney feature before it. 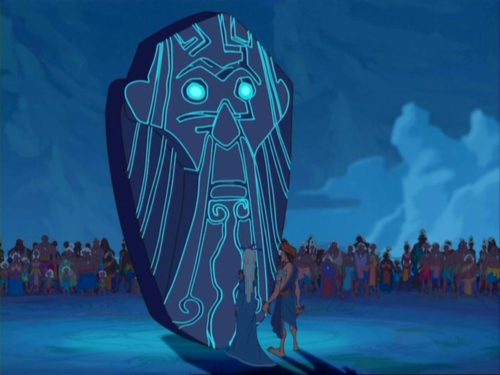 It seems that while Disney may have scoffed at Warner’s box office failures in the animated adventure market, including the entertaining Titan A.E. and the perfect The Iron Giant, they learned that the animated feature doesn’t have to be a sappy musical or strings of Pixar-animated pop-culture gags.
Disney deserves praise for finally not ruining a fine adventure with talking animals; however, not all of the characters here appear to be of the same species. Primarily the character called Mole (Corey Burton), but this complaint could apply to a few other characters as well. Titan A.E. clocked a lot of mileage with the John Leguizamo-voiced Gune and his mad tinkerer hijinks, but the fact that he was a weird little alien made sense in the sci-fi context. Mole takes the same place in the cast but as a character he stands out the most as not just being of a different nationality (French) but a completely different race of creature than the rest of the cast. Some of the characters even notice this, as his is the only back-story we don’t learn and in fact are told that we don’t want to know.

Besides Mole, the rest of the comic relief scores more than a few big hits. In particular, Don Novello resuscitates his Father Guido Sarducci character in the guise of Vincenzo Santorini, with demolitions replacing his old padre gig. Vincenzo gets his laughs from his main talents, which are blowing things up and listing things in that halting Novello style. 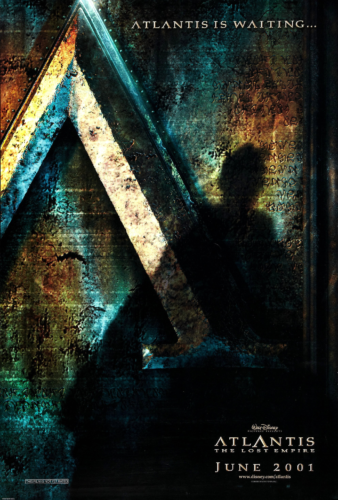 Once the sunken city is found, Atlantis: The Lost Empire manifests shades of Frank Capra’s Lost Horizon. An ancient ruler, a beautiful girl, a land where no one ages and visitors can’t go home are some of the elements proving that Walt’s kids are aiming for the thrilling adventures of yesteryear and that they know their lineage. Thankfully, Atlantis is the high adventure film that film fans have been waiting for.

Although, thanks to marketing and stolen production design, The Mummy franchise is the heir apparent to the Indiana Jones Dynasty, Atlantis is the picture that deserves the throne. The heroes of Atlantis need both bravery and brains to save the world while The Mummy Returns’ Rick O’Connell needed only to decode the Egyptian equivalent of the McDonald’s picture menu for the illiterate.