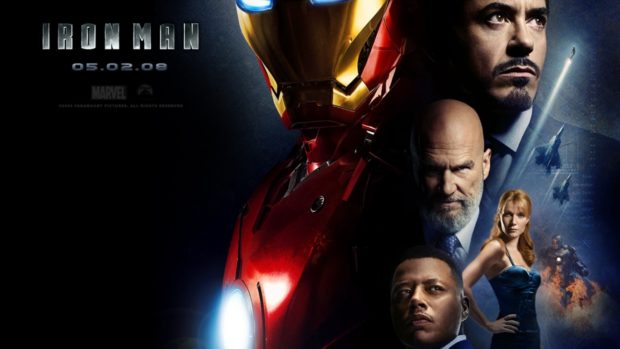 In the 60s, the song went “Tony Stark makes you feel / he’s a cool exec with a heart of steel…” (Okay, so it’s not exactly Noel Coward.) The average moviegoer now, though, wouldn’t even know that theme song, let alone that Tony Stark dons the armor of Iron Man.

So for filmmaker Jon Favreau and Marvel Studios, both the blessing and the challenge of Iron Man the movie is starting from scratch, convincing an audience they want to know this mythos. Working from a screenplay credited to two different teams and clearly augmented by Robert Downey, Jr., this debut from the independent Marvel Studios accomplishes everything it needs to – and thanks to Downey, a little bit more.

Over the years, a lot of actors circled around the project, but Robert Downey Jr. is Tony Stark. Throwing off one-liners as casually as he clinks the ice in his glass, he fully inhabits the diffident playboy genius that, let’s face it, is absolutely one of the biggest jerks in the Marvel Universe. Rather than cover Stark’s flaws, Downey shows why those things also drive him to unexpected acts of heroism.

So this wunderkind can cruelly but charmingly manipulate young women, inveigle his friends into going against their better natures and generally look like a guy getting away with it all, whatever it is. But it’s also clear from both script and performances that nobody has ever really called him to task for it. 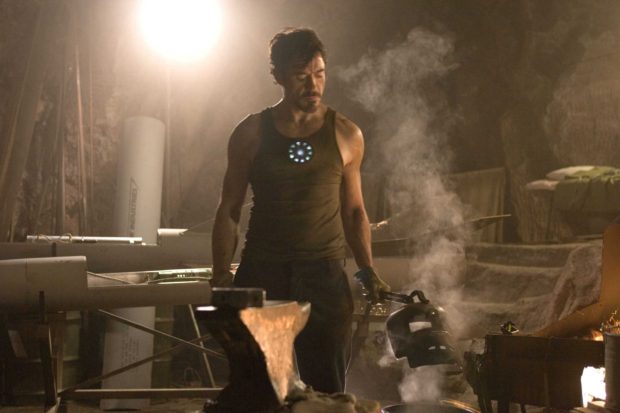 When Stark gets a slap in the face (almost immediately, as Favreau plays a little bit with chronology in the first act of the film), it’s not just practicality that puts him on the road to being Iron Man. It is a visible realization that he’s a badder boy than he ever wanted to be.

People say that superheroes all have similar origins, and though the beats of the story may resemble others superficially, Iron Man makes this story all its own. Yes, there are lost parents, but they are deep in the past and no more of a molding force than they would be for any normal man. If anything, Stark uses misplaced hero worship to excuse his behavior until a tragedy in Afghanistan.

The original comic stories – and the film does credit Larry Lieber and Don Heck in addition to the expected Lee and Kirby – appeared steeped in the Viet Nam conflict, and that may be another strong reason that the time is right for Iron Man, and why it works so well. Stark Industries has made it too easy to fight in extremely destructive ways, and Tony Stark must atone, pain written all over the face underneath the helmet.

In a couple of shots, it’s a credit to Downey’s physical control that even in the armor, which isn’t always CG, that sad anger reads in Iron Man’s stance and gestures.

Proving herself a movie star again, Gwyneth Paltrow holds her own in the shadow of Downey. As Pepper Potts, she too has an unexpected depth, capturing the flirtatious rhythms of the devoted woman who still refuses to play second fiddle to the bevy of women in Stark’s life. In ways neither character can articulate, Potts has Stark’s heart. Neither knows what to do about that situation, setting the stage for the franchise to continue an emotional throughline.

Cleverly and offhandedly, director Jon Favreau has put himself in a position to see that to fruition. Not only does he steer the film, he cast himself as Happy Hogan, the limousine driver/bodyguard who will one day become part of a triangle. In a larger role as James Rhodes, you can see Terrence Howard aching to get into that armor himself. Certainly he reflects Stark’s friendship, and comes across as the only guy that Tony would one day trust with his toys.

That’s one of the great charms of this film for fans and non-fans. If you know how this all adds up, Favreau and his writing team have laid out plenty of clues for where future films can go. Yet it’s done so subtly that someone unfamiliar with Iron Man will just accept things as neat dressing. While the main villain of the film may be Obadiah Stane (Jeff Bridges), Stark’s tormentor in Afghanistan has a connection to a much larger piece of the story. Or you could just walk out content that he’s one more effective evil figure. 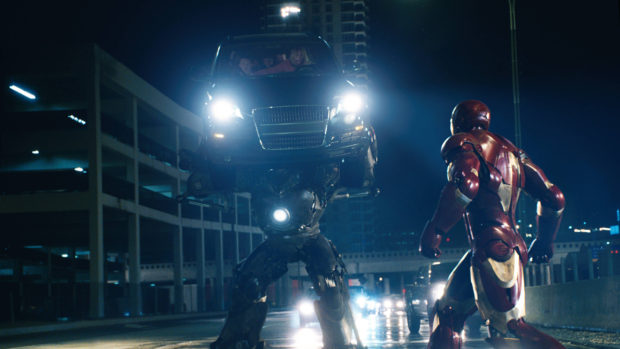 Iron Man also stands as Marvel’s first attempt at weaving the larger tapestry of their universe. A few verbal cues hint that they’d like their flagship characters back in the fold, but they do also concretely establish SHIELD, represented by the deceptively calm Agent Phil Coulson (Clark Gregg). His more mercurial boss Nick Fury was rumored to have a cameo, but sorry, was not in the print screened for the critics.

Regardless of what fans thought they wanted, Iron Man makes a solid entry. Maybe it will turn non-fans into fans. It’s not only that good, it may be the best movie adapted from Marvel’s characters. While not quite providing that uplift that made me want to watch it again immediately, Iron Man will still be getting my money again.

*Geek note: Blink and you’ll miss executive producer Peter Billingsley with a horrific shaved head as a scientist trying to duplicate Tony Stark’s efforts. Yes, little Ralphie from A Christmas Story has grown up and boy, did I want Jeff Bridges to shake him and threaten to shoot his eye out.