When the Ood were introduced two seasons ago, the squid-looking alien servants transformed into red eyed killers who terrorised the Doctor, Rose and the crew on the strange dark planet while they were controlled by an evil force. For this episode the red-eye returns, but the murderous Ood now have a real reason for attacking their human masters.

Science fiction has been an outlet that enabled writers to reflect on current social, economic and political issues facing the modern world. Series like ‘Star Trek’, ‘Alien Nation’, ‘V’ and more recently ‘Battlestar Galactica’ take storylines that are controversial and not really approached in modern drama and put them in an alien environment or science fiction setting to tell a story that will shock and move you. ‘Planet of the Ood’ tries to do the same for ‘Doctor Who’ and for the most part they succeed.

This is all due to the performances of David Tennant and Catherine Tate, who lead the story of the Ood’s place in the Human Empire that reflects an issue that still affects the world today and something that has plagued mankind since records began. 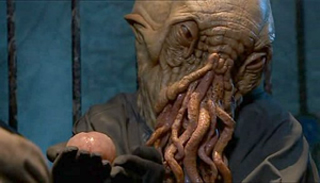 Catherine Tate shows here that she is an actress of talent and has not just been brought into the series to add a little comedic value into the show. When the Doctor realises that he hasn’t done enough to help the Ood after his first contact with them, you see even more of the range of David Tennant as he strives to become the best actor to play the role of the Time Lord.

The supporting cast is also good with Tim McInnerny, best known from the classic ‘Blackadder’, plays a good villain in the shape of Klineman Halpen, the owner of the Ood service and the man who will do anything to stop the red-eye problem from spreading throughout the empire.

‘Planet of the Ood’ continues the good start to the new season of ‘Doctor Who’. With good performances, another increase the special effects budget and a social issue story that will get you thinking, this is another good show from Russell T. Davies and his creative team.