The Fast and The Furious roars into theaters with the classic style and raw power of the ’69 Dodge Charger featured in the finale of the picture. The film unapologetically invades the multiplex culture with a drive-in attitude, a B-Picture from a time before massive release pushes of overly polished, poorly written, audience-tested crap forced certain titles to the top of the box office charts where such “success” is reported as news. Like last year’s underrated The Way of the Gun, Furious never strays too far from its genre, infusing it with a visceral energy sorely lacking from most of the rote recitations seen this year.

Although the outlaw world of street racing provides the setting, the plot is all “undercover cop gets too close to the case.” With the police story powering the plot, the racing scenes are free to add thrills without having to drive the drama. Brian Spindler (Paul Walker), a wide-eyed, thickheaded rookie, must infiltrate a street racing team led by Dominic Toretto (Vin Diesel). As the romance between Brian and Dominic’s sister (Jordana Brewster) heats up, Brian becomes more and more convinced that his superiors’ suspicions about Dominic are wrong.

Walker’s So-Cal delivery invokes a slightly more talented and infinitely more charismatic Keanu Reeves. The billing claims that Vin Diesel stars in The Fast and The Furious, but even with Diesel’s undeniable movie star credentials he can’t begin to compete with the star power of a gloss black ’69 Charger sporting a huge blower from its hood. Rounding out the cast, Michelle Rodriguez does her tough girl thing as Dominic’s squeeze and Chad Lindberg steps in as the very poor man’s Giovanni Ribisi. 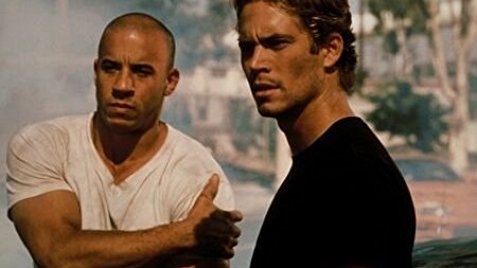 The strongest aspect of The Fast and The Furious is the convincing world and culture that director Rob Cohen (The Skulls) creates. Look for Cohen’s little homage to himself when Dominic and the guys watch a movie; it’s Dragon: The Bruce Lee Story, also directed by Cohen. According to the credits, the script was based on a magazine article (presumably about street racing) written by Ken Li, and the picture does have the feel of a well-researched world. Whether or not the film accurately portrays real street racing teams in L.A. is not important. What matters is that an interesting and internally consistent world comes through on screen. This is a world in which the police worry about angry truckers “beginning to arm themselves.”

The Fast and The Furious also exists in a world where race is an issue but never a problem. The night that Paul meets all of the teams, they are cleanly separated into racially coded groups – the black team and the Latino team and the Chinese team. In fact, it appears that only Dominic has an integrated team in the 323, consisting of Italians, Latinas, and Scummy White Guys. To make this point even more obvious, the highly anticipated event in the desert every year is called Race Wars.

While the cops and robbers plot moves through its predictable turns, the street racing setting and characters bring a freshness and excitement the genre hasn’t seen in a while. Like Witness, the cop story keeps the story moving but the new world keeps it interesting.

The street racing and all of its details bring to mind Monte Hellman’s 1971 street racing classic, Two-Lane Blacktop. Both of these films keep the gear heads in mind and throw out a lot more specs and jargon than they would need to if they merely wanted to entertain the SUV and family car driving public. From its lingering close-ups of open hoods to its reveries about the freeing nature of speed, The Fast and The Furious cares about winning the respect of the kinds of guys and girls that populate the story. 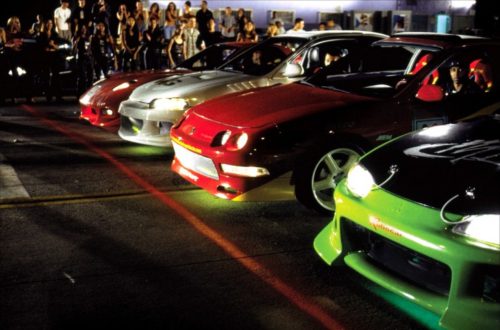 Last year’s Gone In 60 Seconds used computers to jump a Shelby Mustang over stopped traffic. The fact that anyone could tell that the meat of the air time was just an animation took all of the excitement out of the stunt. The precision driving in The Fast and The Furious is some of the best ever put to film, and as far as one can tell it was done without the help of any digital interference. Computers have their place in the special effect film, but they have no place in the world of stunts, short of erasing a safety wire or other such touch-up.

All of the stunts in Furious are possible. Safe? No. Likely? No. Physically, humanly possible? Yes. And so they are performed for real, by real people. No doubt some camera tricks are employed, but that’s movie stunt work, not animated silliness.

Overall The Fast and The Furious is a success. It knows that classic construction is classic for a reason, both when it comes to cars and plots. Most importantly, The Fast and The Furious never apologizes for being a B-Picture. It tries its hardest to be the best damn B-Picture it can be, because it will never be anything more. But that’s enough. When infused with the joy of making a great movie and a love of the art of the cinematic story, such is the essence of movies at their greatest.