Pity Jean-Claude Van Damme. He must sit around his apartment muttering, “I spake Englich bettair zan zat Jet Li. Why won’t zey luff me?” To add insult (and salt) to injury, Kiss of the Dragon features only one actor who speaks English better than Jean-Claude, and it still kicks the butt of his entire body of work (except maybe Timecop). What the silly Flem forgets is that Jet Li knows how to craft a film to his strengths, and downplays his weaknesses. The result? Solid action and not too much of that messy acting.

The thin story, conceived by Li himself, requires little of anyone. Only the villain, Richard (Tcheky Karyo), has the opportunity to ham things up, which he does with elegant restraint. Richard serves as the corrupt police inspector in charge of destroying a heroin ring in Paris. What he hasn’t revealed to his superiors, of course, is that he also runs that same heroin ring. The Chinese government sends over their best man, Liu Jian (Li), to help capture the Chinese druglord assisting Richard. A grim supercop, Liu Jian has the nice extra touch of using acupuncture needles in addition to the mad fighting skills. Knowing opportunity when it knocks, Richard kills his partner and frames Liu Jian for it. This plays out very quickly, a nice change from the usual American “framed man” stories. Within minutes of Richard’s introduction, we know what he is, so the film doesn’t have to try and fool us with the “mystery” of who is really behind all of Liu Jian’s troubles.

Luckily for Liu Jian, dubbed “Johnny” by the sardonic Richard, he has a safe house. Run by sleeper agent Uncle Tai (Burt Kwouk – Clouseau’s Cato meeting the future Kato), Liu Jian poses as a maker of shrimp chips until he can safely deliver a videotape which will prove his innocence. To make things even easier, the Chinese officials in Paris have hidden emergency phones and weaponry throughout the city, just in case one of their men gets framed for murder by a corrupt Parisian. This happens more often than you might think, and the police have prepared for it. Almost immediately after making contact, Liu Jian loses the tape and all the people who believe in his innocence. Don’t be misled: this loss comes at the price of one great action sequence on a glass tourist boat. In the words of an audience member sitting next to co-editor Mike Goodson: “that s*** was dope!”

Along the way Liu Jian crosses paths with the requisite smackhead hooker with a heart of gold, Jessica (Bridget Fonda). Fonda actually does something with her role, unafraid to play a dumb character who has made some terrible choices, while trying to maintain dignity. Her desperation (Richard holds her young daughter hostage for reasons never quite explained) and overall neediness balances out Li’s self-sufficient loner. Once Liu Jian realizes that Jessica witnessed the initial murder, he struggles between his need for her to prove him innocent and his awkward empathy for her plight. 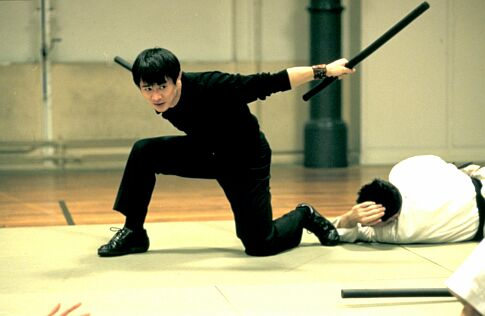 It’s a brilliant touch on Li’s part, fleshed out by writers Luc Besson and Robert Mark Kamen. Though he speaks English fairly well, Li’s acting remains stiff. And so Liu Jian himself is a man who has shut off a lot of human emotion. Dedicated to the job, he has no family, no friends, and no real life. The bond he forms with Jessica allows Li to showcase the shy, unsure smile that he has mastered, but it never goes to the point of actual affection. All of that gets shouldered by Fonda, and Li doesn’t have to get bogged down with any of that messy love stuff.

Instead, this movie does what it should: move from action setpiece to action setpiece. Most of it flows naturally, though at a pace much slower than we have come to expect from summer movies. The opening carefully builds anticipation, following Liu Jian from the airport to Chinatown to a swank hotel without offering much clue as to why he’s there. When we finally get the payoff, it’s a huge relief, and refreshing that a movie actually asks us to wait for it. In many ways, Kiss of the Dragon hearkens back to cop thrillers the way they used to be made in the ’70’s, as much about tension as action. If Clint Eastwood had known martial arts, he might have made this movie.

Only one action sequence looks crowbarred into the plot. Clearly, Li and the writers had an idea so fun that they just did not care that it would stretch credibility. They were right to not care: Li takes on at least twenty police officers in a kung fu class, and it’s jaw-dropping in its excitement.

Li has been criticized in the past for making liberal use of computer graphics and wires to make his fighting look good. Here he and director Chris Nahon have toned down the scale of the action, and the fights have a raw, honest feel missing from Romeo Must Die. Though Nahon uses a lot of quick cuts in the fights, you cannot doubt that Li is actually doing the stuntwork. It’s grim, determined, and definitely “dope.”

Kiss of the Dragon may get lost in crowded cineplexes this summer. But if you’re tired of noisy effects-filled films (and even if you’re not), give this a look. Jet Li will be a major action star, and he won’t be Van Dammed trying.